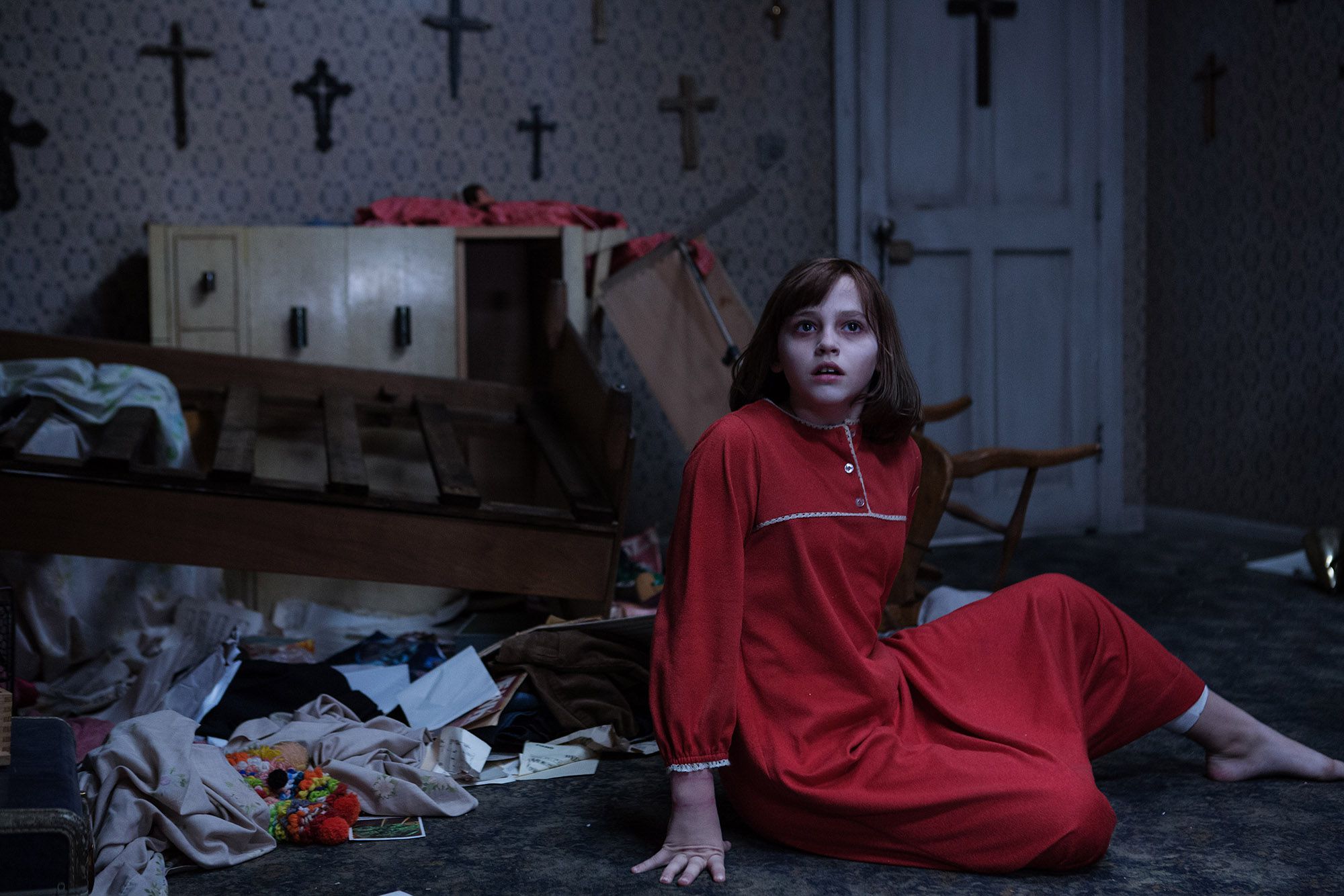 In a haunted-house thriller, inanimate objects frequently poses a threat, and one of the modest charms of director James Wan’s The Conjuring lied in how it mined chills from spare furnishings. With the exception of its arsenal of analog ghost-hunting equipment, the 2013 film largely ignored the pop-cultural bric-a-brac of its early-1970s setting, instead lingering on the era’s clothing and interior design: floral wallpapers, fabric ties, massive armoires, and the shared bedrooms of indistinguishable siblings. The film was a well-executed fount of maximalist chills, but its modest trappings lent The Conjuring a patina of classical elegance.

The Conjuring 2 finds the evangelical paranormal investigators Ed and Lorraine Warren (Patrick Wilson and Vera Farmiga) housebound, reduced to a voluntary retirement after their work combating the 1976 Amityville horrors, which are recreated in a flashy prologue. For the next hour, the film follows a formula more like Wan’s Furious 7 than any of his previous horror efforts. It’s a series of undifferentiated, if often extremely entertaining, genre scares, distinguished by judicious shock cuts and roving tracking shots. Before finally sending the Warrens back to work, the film alternates listlessly between PTSD-enhanced terrors experienced by the clairvoyant Lorraine and those wrought upon a new beleaguered family: the Hodgsons of London’s Enfield borough, purported victims of a poltergeist haunting from 1977 until 1979.

This wildly undisciplined sequel is the inverse of its predecessor: The Enfield house is small, but it’s as full of traps as it is winking jokes. In the living room, the walls are rotting with moisture as a worn leather chair creaks unbidden and the family telly cycles through images of a young Margaret Thatcher. An eerie, vaginal-looking children’s play tent lies at one end of a narrow second floor hallway; at the other, young Janet Hodgson (Madison Wolfe) shares a bedroom with her sister, Margaret (Lauren Esposito). Humpty Dumpty sits on a dresser, waiting to fall, surrounded by posters of aging teen idol David Soul.

Such a clutter of empty signifiers is emblematic of the film as a whole, which only bothers to develop its characters in the immediate run-up to its extended finale. Wolfe makes a solid impression as the Hodgson’s beleaguered satanic medium, but Frances O’Connor’s harried mother is given far less attention than Lili Taylor’s equivalent character in the original. On a scene by scene basis, The Conjuring 2 is a model of heightened tension and uneasy release (Don Burgess’s camera always feels like it’s ready to be jostled), but the tropes propelling these night terrors, particularly the CGI-addled teleportation and Wan’s increasingly tired sonic mélanges of ghostly moans and clanking pipes, grow stale pretty quickly.

The film attempts to fold broad thematic concepts—media hysteria about possession, the sanctification of the Warrens’ faith in both God and the paranormal, maybe a critique of the British public housing system under Tory rule—into its breakneck final act, but most of these ideas are undercut by a haphazard structure. After an hour of circular camera movements and shock cuts revealing familiar monsters (one suggests an Apocalypto extra in a nun’s tunic, another splits the difference between the Babadook and Slender Man), the plot machinery is dependent on both the Warrens and the audience doubting the existence of these demons. The gambit, which transforms humble Lorraine into an egomaniacal religious warrior, is an unmitigated failure, but fans of Wilson will be glad to learn that the film’s limp evocation of faith offers him a chance to road-test his Elvis impression.

Review: Now You See Me 2