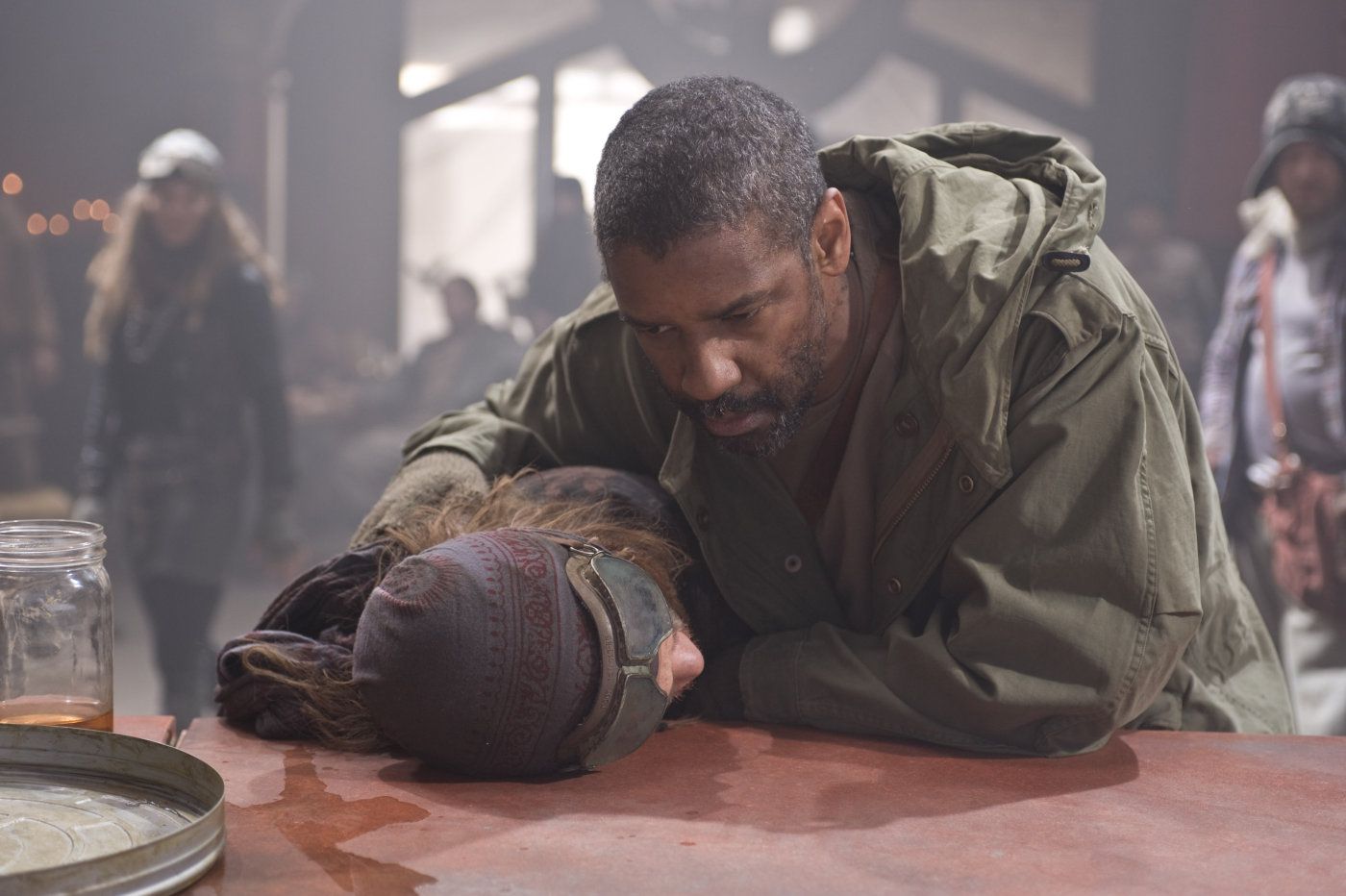 Resurrection is The Book of Eli’s game, from its tale of a post-apocalyptic society’s reformation, to its hero emerging from the ashes of a nuclear holocaust, to its filmmakers, Albert and Allen Hughes, striving to resuscitate their careers with this, their first fictional feature since 2001’s From Hell. Come on up for the rising, indeed, except that there’s very little to lift one’s spirits about this adrenalized Wild West-ish variant of The Road, typified as it is by a familiar ash-gray patina, striking but inert graphic-novel compositions and cinematographic flourishes, and kick-ass combat straight out of [insert recent action film title]. The only defining characteristic of the Hughes brothers’ latest is, in fact, its equally enthusiastic R-rated violence and earnest piousness, a synthesis of modern Hollywood-video-game bloodlust and conservative heartland godliness that may succeed in pandering to opposite sides of the ideological-political spectrum but nonetheless comes off as a preachy Sunday school slog of a marriage.

Thirty years after the “great flash,” sunglasses-loving, iPod-using nomad Eli (one-dimensionally noble Denzel Washington) continues his solitary trek west across a barren wasteland populated by cannibalistic marauders, lugging about his cherished Bible and, eventually, fending off the attempts of a regional kingpin named Carnegie (Gary Oldman) to acquire the holy tome. “It’s a weapon,” Carnegie opines about the Bible, which he views as the tool needed to manipulate the sheepish population into obeying his despotic development plans. Is God’s message merely a vessel for man’s evil ambitions or a rousing force for good? Don’t hold out hope for a complicated answer to that central question in Book of Eli, which celebrates Eli’s pure faith and denigrates Carnegie’s nefarious organized-religion machinations so mundanely that things quickly bog down in snoozy righteousness.

Throughout, the Hughes brothers attempt to keep things genre-lively through swiftly choreographed scenes of Eli slaughtering bands of hygiene-challenged adversaries. Yet despite their sharp visual use of silhouette, the open road’s big sky, and a few nifty comic book-y camera tricks (including a close-up zoom into a firing gatling gun’s barrel), the tale’s routine mayhem lacks even a faint jolt of electricity.

Eli is nothing less than a prophet-superman on a divine mission, and while he naturally saves the word of God and, thus, humanity at large, he’s powerless to salvage the film from its derivativeness and, more pressing still, raft of jarring, clumsy creative decisions. Tom Waits, Michael Gambon, Jennifer Beals, and Malcolm McDowell appear and disappear at random as perfunctory cartoonish supporting players, and Mila Kunis’s sidekick to Eli, exhibiting fine threads, Noxzema-clean skin, and perfectly styled hair, comes off as having been teleported in from another, less grungy reality. Her budding mentor-disciple relationship with Eli (laced with muted, absurd May-December undercurrents) is the most creaky of the story’s many contrivances, though for pure ridiculousness, it can’t match the finale, which airlifts in happy-time inspiration via Eli—already a would-be descendant of the Wachowski siblings’ Matrix franchise—going all bald-headed, white-robbed Neo on the hallelujah-imploring proceedings.