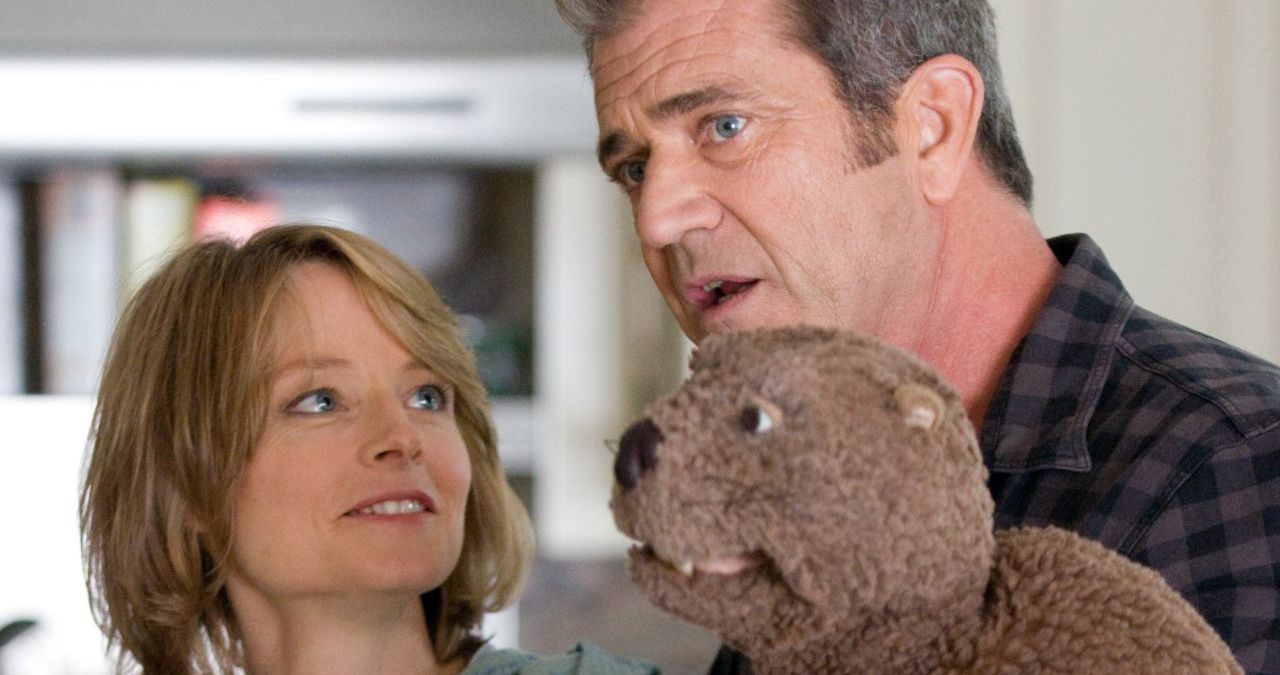 “So, are you crazy?” a child precociously asks Mel Gibson in the last minutes of The Beaver, Jodie Foster’s first directorial effort in 16 years, which, fueled by her star’s tabloid and legal travails, works far better as a conversation piece than a movie. A depression-riddled toy-company exec and family man, Gibson’s Walter Black finds no answers in drum circles, analysis, or the bottle, and after being given walking papers by his no-longer-enabling wife, Meredith (Foster), fails even at necktie-hanging suicide, wearing a grungy beaver hand puppet while drunkenly weeping over Kung Fu’s “the past must not rule the future” aphorisms on a motel TV before the set topples onto his head. Upon waking, he growls tough-love intervention jargon at himself through the puppet in a Michael Caine/Oliver Reed accent, then proceeds to recapture command of his family and professional life, speaking solely through his mangy alter ego, who even collapses in openmouthed ecstasy after he and Walter have bangin’ reconciliation sex with Meredith.

Is this Fight Club–style self-fulfillment satire, a grim 21st-century spin on the old James Stewart amiable-alcoholic comedy Harvey, or another wearying discontents-of-the-comfortable American Beauty descendant? By skating over the social questions inherent in upper-class dissatisfaction, Foster and screenwriter Kyle Killen end up with one of the most irritating examples of the latter, driving home parallels between Walter and his son, senior high schooler Porter (Anton Yelchin), with sledgehammer heaviness: The boy sells term papers because he can write in any voice except his own, see? Porter smashes his head into the bedroom wall until he exposes the foam insulation, like Dustin Hoffman’s graduate on steroids, and Walter violently rebels against the beaver (who declares to Meredith, “I’m not goin’ anywhere, love”) with tinny echoes of Fight Club’s self-administered beating scene and Steve Martin’s bifurcated consciousness in All of Me.

The Gibson-centered plot crams in too many ideas that are fumbled and quickly dropped, as when mass-produced beaver puppets unpersuasively become a pop-culture fad (leading to more trendy interview cameos by Matt Lauer and Terry Gross), while Yelchin and an ill-used Jennifer Lawrence, as his cheerleader-valedictorian crush, are afflicted with a laborious courtship all about his daddy issues and her buried grief. The kind of Therapy for Dummies speechifying ladled over the teenagers’ scenes, counterpointed to allegedly transgressive effect by the schizoid comedy, is becoming a lazy new indie formula, replacing the rhythms and depths of demanding adult drama. (The forthcoming Hesher uses an insolent metalhead punk in the place of the hand puppet as a family’s catalyst for personal growth.)

There’s nothing quite so depressing about The Beaver, even the flickers of authentic desperation in Foster’s performance or the near-total waste of Cherry Jones as Walter’s ever-smiling toy-company VP, as its pair of learning-and-growing climaxes predictably expunging all of the material’s dark implications; all you need is a graduation-day confession, or as in Good Will Hunting, a single hug, to wipe all your traumas away. And Gibson? He delivers some credible moments of wit and anguish, as when his head droops with the beaver’s after being cold-shouldered by his son, and admirable commitment to the role’s outré demands, but his passion is vanquished by his collaborators’ retreat into boilerplate sentimentality.

Review: The Colors of the Mountain