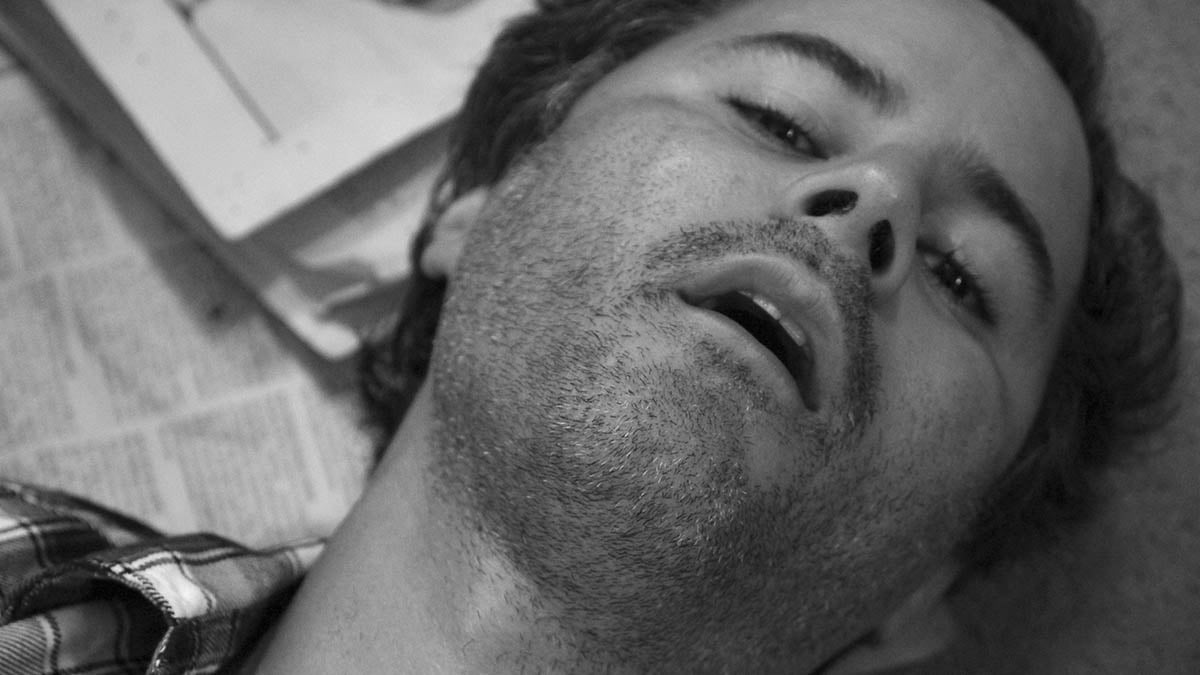 In the scabrous, blackly comic provocations of Onur Tukel, the end of human existence always seems imminent. His films are steeped in the heavy anxiety of living in a fractious contemporary New York City, where the only salve is a healthy sense of nihilistic humor and a gleeful willingness to transgress. Recent times, however, have brought a deeper level of sobering insight to this merry prankster’s exploration of urban alienation and general societal apathy in the face of our continued self-destruction. The melancholic Scenes from an Empty Church touchingly reckoned with a world teetering on the brink of doomsday during the early stages of the Covid-19 pandemic, and his latest, the hypnotically doom-laden That Cold Dead Look in Your Eyes, now feels like the result of being tipped right over that apocalyptic cliff.

The pandemic doesn’t factor into the cockeyed world of That Cold Dead Look in Your Eyes, but as someone aptly states at one point, “It’s hard to explain, but something’s wrong. I can feel it.” And for French transplant Leonard (Franck Raharinosy), life is falling apart in gruelling fashion. His girlfriend, Marie (Nora Arnezeder), has dumped him for cheating, angrily instructing him to be out of their apartment by the time she returns from a business trip abroad. Meanwhile, his head chef job at a restaurant is on the line as he proves increasingly incapable of cooking anything edible. Then, just as Marie’s odious photographer father, Dennis (Alan Ceppos), arrives for an extended stay, Leonard’s problems leap into the supernatural when he begins to hallucinate white-eyed zombie-like creatures wherever he goes.

Tukel has played around with horror elements in the past, most notably in 2014’s vampire comedy Summer of Blood, but That Cold Dead Look in Your Eyes is as close as he’s gotten to crafting a genuine fright flick. As Leonard’s visions increase in frequency, potentially a result of the mysterious “Theta Boxes” that have been installed throughout the city to improve internet service, the film unnervingly merges layers of reality, memory, dreams, and paranoia. The aesthetic is correspondingly striking, employing black-and-white photography that echoes the ‘90s hellscapes of Abel Ferrara’s The Addiction and Michael Almereyda’s Nadja and a score that oscillates between eerie music box tinkling and throbbing electronic beats. Leonard’s journey ultimately suggests a modern riff on Carnival of Souls, yet Tukel refuses to give in to any concrete explanations for the atmosphere of existential anguish.

Despite its overarching gloominess, That Cold Dead Look in Your Eyes still retains Tukel’s flair for brazen comedy. Dennis remains a hilariously obnoxious foil throughout, driving Leonard over the edge by constantly clogging up the toilet with his self-proclaimed “enormous shits” and throwing an impromptu nude male model photo shoot in the apartment. In a clever absurdist twist, almost all of the film’s dialogue is in French, which sets the stage for some especially droll and pointed jabs at popular French culture (“I cried like that when I saw Amour,” one of the models states when Leonard emotionally breaks down in front of them).

There’s a mature poignancy that cuts through all of the film’s intermittent silliness, particularly in the color flashbacks to the happier days of Leonard and Marie’s relationship. And while it becomes apparent that Leonard may never escape his macabre downward spiral into oblivion, the enigmatic final moments of That Cold Dead Look in Your Eyes, where our protagonist lets his dire circumstances envelop him like a snug blanket, gathers tender strength from the fatalistic comfort of knowing that the end times are nigh.