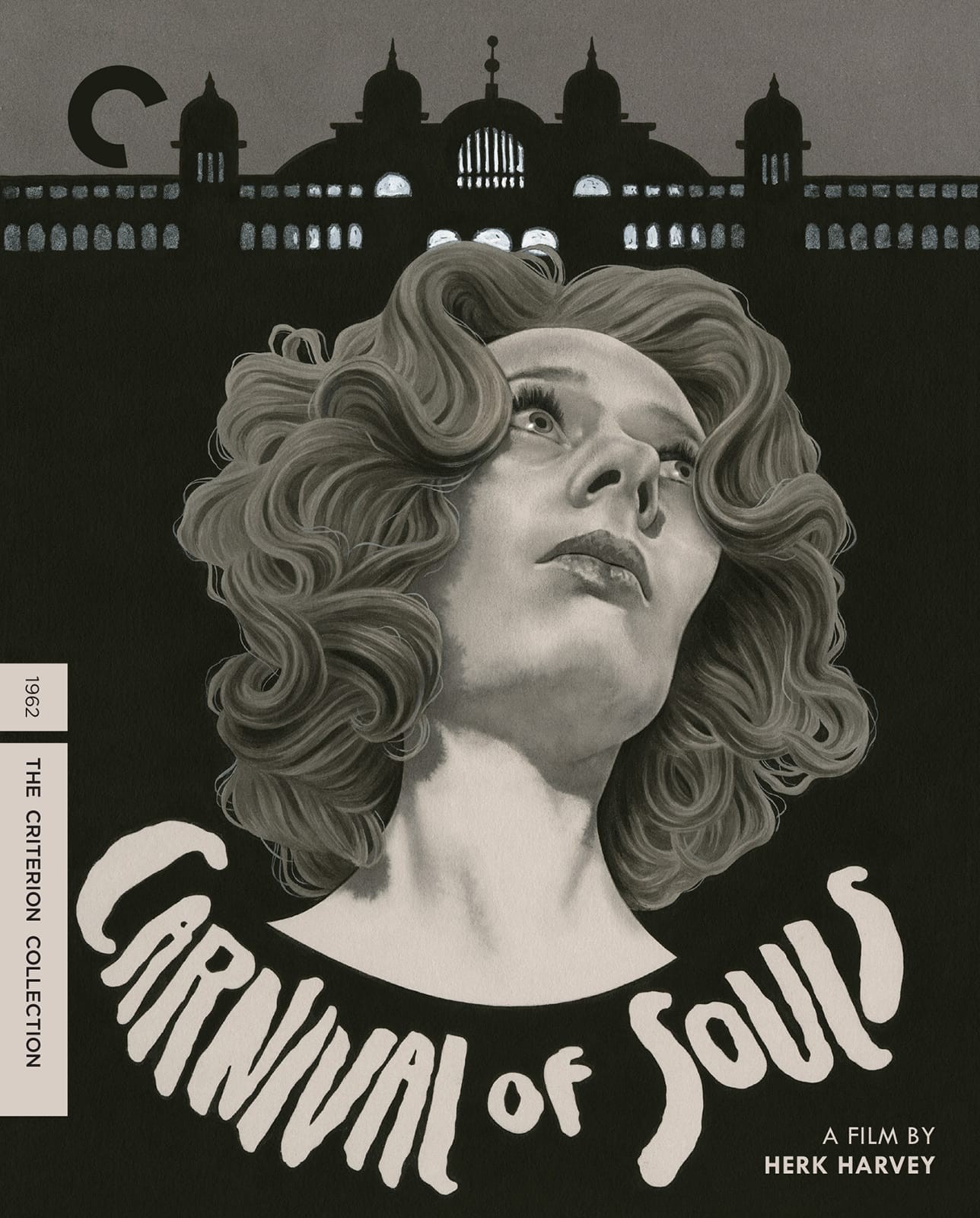 Effective fantasy and horror films both thrive on a tactile sense of the reality from which they’re departing, underlining a divide between objective and subjective experience, implying that the distinction might be misleading or arbitrary. This is why micro-budget productions in these genres are often more haunting than their more elaborate and expensive counterparts, as they show the formal, and, by extension and implication, the emotional strain that’s necessary to taking irrational leaps from the established realm of the rational. Slickly produced genre films, particularly in the age of impersonal computer generated effects, rarely produce such tension, as anything is possible and consequently taken for granted.

Herk Harvey’s Carnival of Souls certainly benefits from the discrepancy that exists between its fantastically subjective vision and raw and inconsistent vérité formality. The filmmaking includes compositions of startling sophistication as well as flat images and threadbare effects that wouldn’t be out of place in a 1950s-era drive-in monster movie, collectively conjuring a kind of uncanny banality that would greatly influence George Romero and David Lynch, among others. Harvey creates a film that’s paradoxically all of a piece for its very unevenness, as the occasional disparity between rough effects and accomplished shot placement indicates the fractured sense of being that torments the heroine, Mary (Candace Hilligoss).

We first see Mary piled into a car with friends. Her group is challenged to race with another car, and they go tumbling into the countryside, speeding toward on an old and narrow bridge. The car veers off the bridge, crashing into the river below. Police soon surround the site, finding it strangely impossible to locate the vehicle in the water. Even stranger, Mary surfaces from the river as if awakening from sleep, and no one seems interested in holding her for questioning. She proceeds with her life, her friends presumably dead, curiously unaffected by what’s transpired. Mary moves to Utah to accept a job playing an organ for a church, despite having no religious convictions, as she views herself simply and pragmatically as a musician seeking work.

Harvey ingeniously employs jarring editing throughout Carnival of Souls (maybe the result of his having to make do with quickly collected coverage, as the film was shot in three weeks) to casually establish Mary’s disconnection from herself following the accident. Scenes don’t always seem to go together, potentially inspiring contemporary viewers to wonder if the Blu-ray they’re watching may have skipped a chapter. Overhead shots of the river from which Mary emerges appear stolen, emphasizing the naturalism of the water, which, in this context, only heightens a sense of its supernatural-ism. The muddy, cloudy fluid appears to be a “found” portal into another dimension.

Mary wanders about in her new town, haunted by a male ghoul in pasty white makeup, played by Harvey, who’s clearly a template for the zombies that would ravage a farmhouse a few years later in Romero’s Night of the Living Dead. Characters suggest that the shrill, defensive Mary is sexually neurotic, and that this ghoul embodies guilt over presumably unsated desire. And, indeed, a stifled sexual pall hangs over Carnival of Souls, which is concerned with a beautiful young woman who spends much of her time in a weird boarding house, the sort that’s often presented in the cinema as a stand-in for all the puritanical hypocrisy of 1950s-era Americana. The weirdness is compounded by the attention paid toward Mary by John (Sidney Berger), a fellow boarder who hits on her with relentless and awkward abandon, thinking it charming to swing by her room early in the morning with coffee that he offers as a pretense for slugging back bourbon. Later, just as Mary seems tempted to give in to John, she sees the ghoul above her shoulder in a mirror, in an image that Harvey springs with terrifying matter-of-factness.

Romero and Lynch took from Harvey a sense of how id and chaos comically and poetically reside underneath misleadingly placid surfaces. Harvey informs simple makeup and compositions of plain small-town architecture with unforgettably surreal and repugnant grandeur, ingeniously wringing more or less free production value out of location shooting. An overhead shot of a giant organ, composed of yard and yards of pipes, suggests nothing less than a famed overhead shot of a castle in the Archers’ Black Narcissus, briefly informing Mary’s playing with a great sense of majesty and longing. The dilapidated pavilion of the film’s title (actually Saltair, on the southern edge of Great Salt Lake) is rendered by Harvey with an evocative awareness of spatial emptiness that’s both mythical and commonplace. Accompanying this imagery is Gene’s Moore’s poignant organ score, which strengthens the subtext of sexual repression and gives the film a lonely spectral quality. Carnival of Souls is an unshakable expression of estrangement.

Blacks are rich and well varied, and whites are soft and delicately balanced. Image detail is greatly improved from prior editions of the film, remarkably offering a variety of new facial and landscape textures, from the foreground to the background. Clarity is perfect and revelatory, particularly in the famous overhead image of a vast, looming church organ. Shadows have a new sense of invasive agency, and the swishy, hokey fade-ins and –outs that are used to convey a sensation of water moving over the image are beautifully translucent, as is footage of actual water. The monaural track is as detailed as the image, scrubbed of distracting white noises that one might not have even detected before watching this edition. Moore’s score resounds with deep, forbidding, and plaintive agency. A gorgeous restoration.

Assembled from an interview the filmmakers gave in 1989, the select-scene audio commentary with director Herk Harvey and screenwriter John Clifford includes discussions on the origins of Carnival of Souls, as well as its production and legacy. Both men are understandably hesitant to offer interpretation of the narrative, though they’ve unsurprisingly been plied for answers by audiences for years. The most interesting takeaway from this conversation is Harvey and Clifford’s pervading lack of artistic pretension, as they suggest two working-class Kansas guys who decided to shoot a movie using the skills they honed making educational videos, inspired by another Kansas filmmaker with a similar background who recently tried his hand at feature-length narrative: Robert Altman.

Correspondingly, portions of said educational videos are included in a featurette on Centuron Corporation, the company that employed Harvey and Clifford for decades, which is accompanied by an essay that’s read by the comedian and writer Dana Gould, who also waxes passionately and informatively on Carnival of Souls in his own supplement, filmed this year. More poetic is the appreciation by critic and filmmaker David Cairns, who memorably describes the film as concerning someone who drops below the “threshold of human perception.”

A number of other odds and ends round out an excellent and eclectic package. There’s a vintage feature on Saltair; outtakes, which, with the accompaniment of Moore’s organ score, play as an even creepier and more free-associative film than the one we now know; and deleted scenes, which expendably suggest that the longer 84-minute director’s cut of Carnival of Souls is less ideal than the official 78-minute version that Criterion restored. Not to mention the trailer, a couple of other miscellaneous location featurettes, and a beautiful essay by critic Kier-La Janisse.

A chilling and vastly influential work of subjective horror cinema, Carnival of Souls has been accorded the robust and exacting Criterion treatment that it deserves.

Blu-ray Review: Arthur Hiller’s The In-Laws on the Criterion Collection