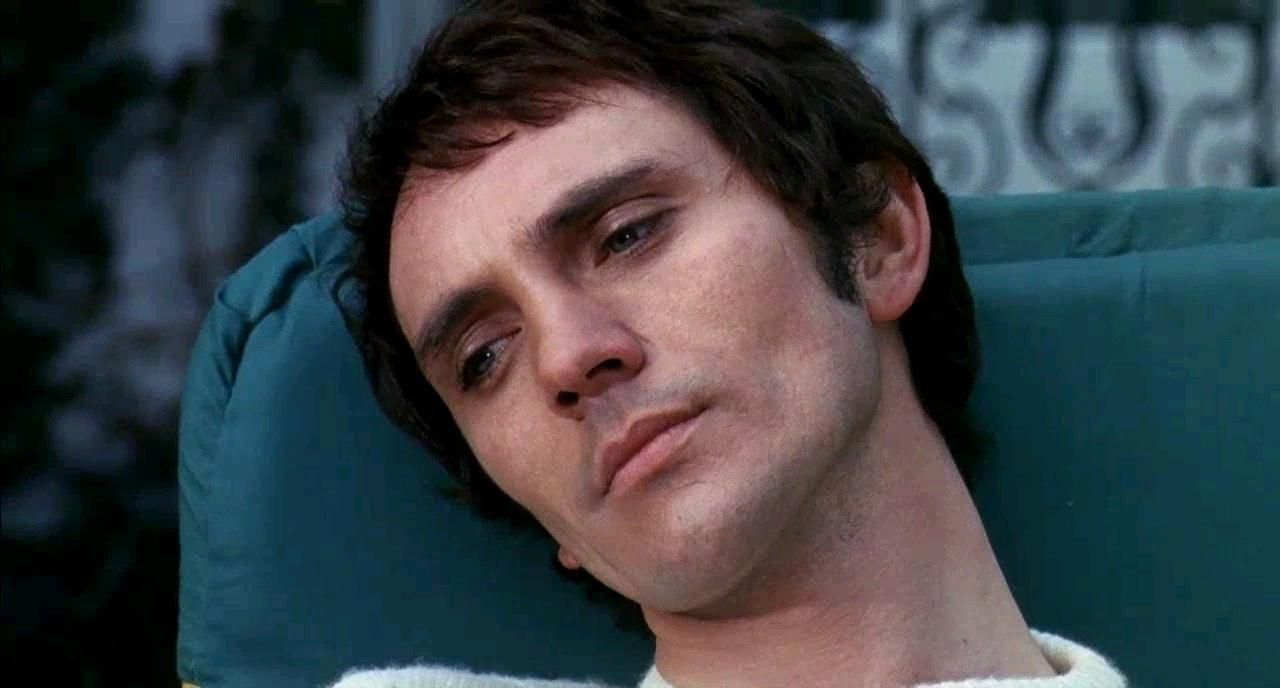 Highly regarded in some quarters, Pier Paolo Pasolini’s Teorema is basically a film about Terence Stamp’s crotch. Admirers of Stamp who have long nursed a secret urge to kneel before Zod may rejoice in the film’s endless scrutiny of his family jewels; everyone else will be laughing at Pasolini’s pretentious, free-form, dream-like nonsense. It’s meant to be a scathing attack on the bourgeoisie, but any five minutes of any Buñuel film would make short work of Teorema.

A nameless young man (Stamp) takes up with a bourgeois family and seduces them one by one. He starts with the loony maid (Laura Betti), who stares at him while he sits and reads a book; we see two extreme close-ups of Stamp’s crotch (one wonders how these gratuitous shots were explained to the actor). Pitying the poor woman, Stamp climbs atop her in his painted-on pants and Pasolini stares at his trim little ass as it starts to grind the maid a bit. (Could Stamp’s crotch be for the characters in the film and his butt solely for the director and the audience? Film studies majors, get working.) Stamp then gets naked and goes to sleep with the fearful son (Andres Soubrette), consoling him in his own patented way. Next is Mama (Silvana Mangano), who takes it all off after feeling up his discarded clothes. Stamp goes to her, smiling his tolerant, sexy smile, the sun blaring behind him (at least Pasolini resists the temptation to have the sun shine straight out of Stamp’s apparently all-healing bulge).

He doesn’t do Papa (Massimo Girotti, who did Stamp-piece-of-ass duty for Visconti years before), but he does put the older man’s legs on his shoulders, definitely the film’s sexiest (and weirdest) moment. Stamp seems most interested in the daughter (Anne Wiazemsky), and he opens his legs extra wide for her, even leers (is this the actor or the character reacting?) Teorema loses whatever momentum it has when Stamp exits halfway through, leaving the family to self-destruct without him. The maid goes back to her native village, won’t eat, gets gray-haired, and finally levitates (!). The son babbles about painting and eventually pisses on one of his canvasses. The daughter becomes catatonic and the mother takes lovers (more crotch shots). The father strips after being confronted with the abundant crotch of a male drifter, goes to the desert (which has been intercut throughout the film), and screams.

Is Pasolini suggesting that the bourgeoisie just can’t handle the phallus? Or is he just getting off on shooting Stamp’s body and the bodies of various hustlers as if they were the proverbial blue-plate special? It’s all very grand and vague and shapeless, filmed better than most of Pasolini’s movies, but indulgent and fairly meaningless. Stamp, one of our finest actors and a great male beauty, plays this impossible part for all it’s worth (just as he caught the impossible mix of good and evil in Melville’s Billy Budd earlier in his career). He seems omniscient, otherworldly, haughty, and rather amused. As a movie, Teorema is overrated and idiotic. As high-class arty wank-off material for Stamp fans, it can’t be beat.