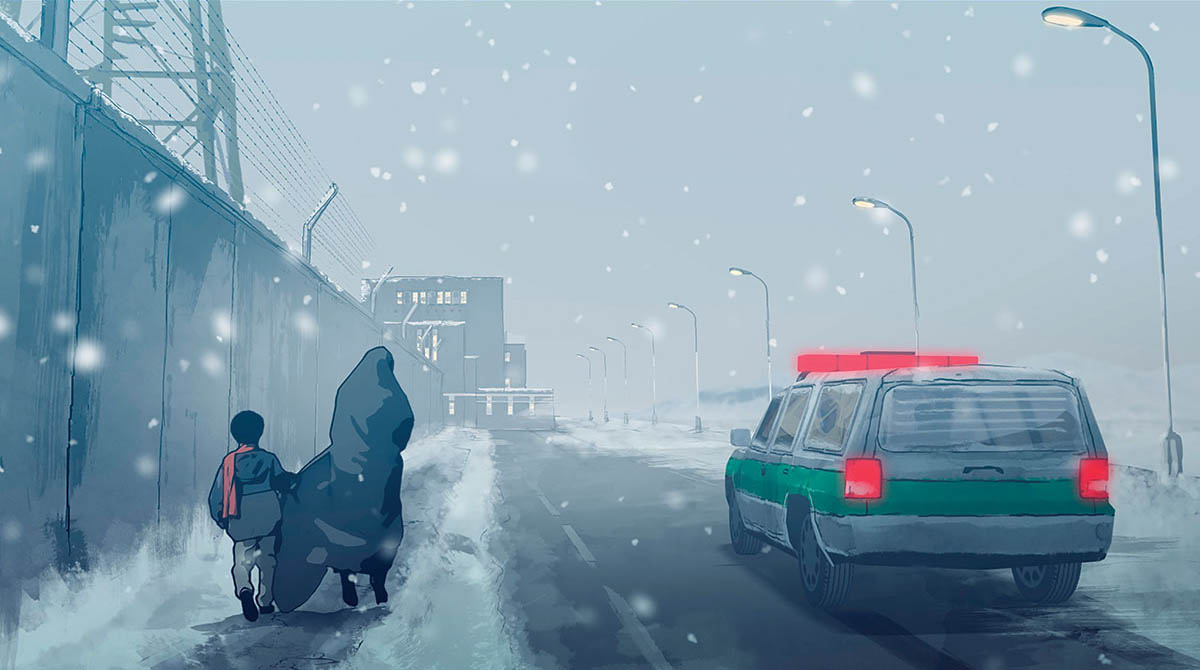 Road head becomes road rage in the first scene of Tehran Taboo, Ali Soozandeh’s animated take on the price Iranians pay, both literally and figuratively, for living under the cruelest of sexually repressive regimes. A man driving a car tries to convince a woman to perform oral sex for less than her usual fee. The woman finally accepts the cash and subsequently hands a piece of gum to her son, who sits impassively in the backseat. When the driver notices his daughter simply holding a man’s hand while walking down the street, he gets so irate that he crashes his vehicle. Sex, rage, and hypocrisy percolate in a similar fashion throughout every scene in this film.

Tehran Taboo is full of astute, and poetically staged, critiques of the parallel worlds resulting from Iran’s police state. Undeterred desire pops up everywhere and all the time—not only as the damned element to be detected and thrashed, but also as the repressed one that keeps returning in the most maladroit of ways. This is a portrait of a Tehran that’s just as rife with all forms of debauchery as any cosmopolitan Western capital but with its inhabitants working extra hard to cover up any type of longing and to repair the unintended consequences of illicit pleasure. An old man watches porn and swiftly switches the channel once a family member walks in the room; women who seek hymen-reconstruction surgery must claim that the membrane inside their vaginas broke by accident; and a you-touch-you-buy economy applies to both watermelons and women.

The film’s plot is set off by lovers who must sit on opposite sides of a park bench to speak, pretending that they’re strangers in case passersby or the police witness them. In this moment, the woman comes to grips with the fact that she’s getting married soon, or so she says, but had sex with this man the night before, after he gave her some sort of pill in a club’s bathroom, where the sexual act took place. She alleges that he deflowered her and wants him to pay for her hymen-reconstruction surgery, which turns out to be a popular business in Tehran, or at least buy her an artificial hymen made in China.

Tehran Taboo, whose animation technique involves the layering of computer-generated imagery atop of live-action images of real actors, is most striking when it simply surveys spaces without vying for traditional narratives. As when animated figures that seem to not have originated from previously shot live-action footage interact with the characters, from a cup that sits in the foreground of a shot, occupying more space in the frame than the people in the scene, to a cat that stares at a child for no particular reason.

Instances like these, when Soozandeh’s film surrenders to plot-less poetry, also turn up when the sex worker’s child inexplicably fills a condom with water and drops it out of a window, or when two women discuss whether men are all the same on a balcony over a dirty martini. For a second, we could be in Manhattan, Nice, or Rio de Janeiro. There are a lot of shots of balconies in Tehran Taboo, the only place where one feels safe from the castrating eyes of the state or, perhaps, one step closer to a truly final solution.

Also remarkable are several scenes set inside a photo studio that punctuate the film—shots of people, mostly women, sitting down behind a blank background to get their portrait taken for some official reason. The off-camera photographer asks the person sitting down what the occasion for the photograph is and promptly suggests a specific color for the background that goes with the stated reason: a marriage, a passport, a souvenir. That moment, when representation of the self and the prying gaze of the state meld into one still image, is captured with the same type of melancholy as a similar moment in Pema Tseden’s Tharlo, when a poetry-reciting homeless man wanders into a photo studio after a haircut. He’s seeking, if not his identity, at least an artifact that represents it. Tehran Taboo’s stupendous final sequence, of a woman utilizing a piece of red cloth to forge bird wings, echoes a similar sentiment of giving in to objects embodying things one can’t actually have.