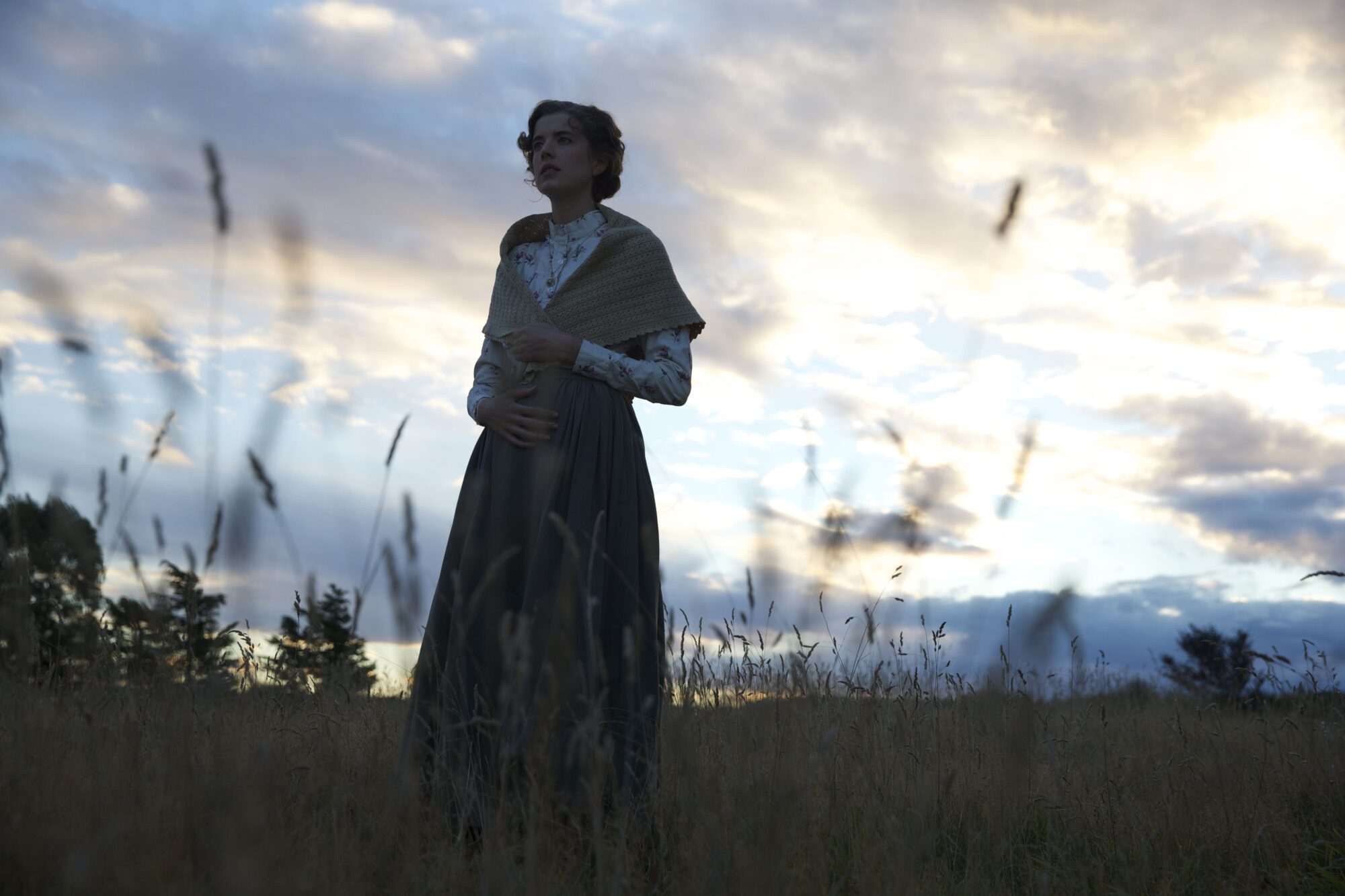 Although Terence Davies’s Sunset Song follows The Deep Blue Sea by a mere four years, watching this sumptuous adaptation of a Scottish classic unfold is akin to witnessing an obvious master clear his throat, with a fair degree of spluttering needing to be endured before some undeniable grace notes are hit. While Davies injects rapture aplenty into this somewhat fusty tale of grim rural life in the early 20th century, the many moments of glorious lyricism frequently feel like a veneer placed over the atypically linear plot rather than an integral part of it. Even if there’s still a perverse pleasure in seeing visual delight married to oft-leaden content, conjuring truly heartfelt emotion from such dislocation is a trick beyond even Davies.

Sunset Song’s euphoric opening minutes would have you think that turn-of-the-century Scotland is a veritable paradise: vast swaying cornfields, sunny avenues, talk of socialism and work in far-off Aberdeen, and a remarkably modern-seeming education system. Yet the traditional and the progressive are actually in conflict from the outset; though willowy teenage protagonist Chris Guthrie (Agyness Deyn) is introduced emerging from the land itself, her first voiceover during a school examination already suggests she longs for even broader horizons. But any such ambition or indeed complexity largely evaporates once her father (Peter Mullan) appears, an almost comically brutish patriarch defined entirely by how he reminds Chris of the need for modesty, tyrannizes and repeatedly impregnates her long-suffering mother (Daniela Nardini), and violently punishes her beloved brother and confidant, Will (Jack Greenlees), for any minor transgression.

Aside from a few intelligently placed ellipses and unsurprisingly ravishing landscape shots, one extended beating meted out to Will by his father is the first scene in which Davies begins to push at the boundaries of what has thus far been a standard costume drama, a wordless, nearly two-minute frontal shot in which the two men’s stances, expressions, and occasional gasps convey far more about their relationship than anything contained in the dialogue. As the wheels of the simplistic plot start turning, sending Will to Aberdeen and his mother to the grave, such moments of tossed-off finesse begin to proliferate: the lingering shot of Chris’s calves being freed from their socks and caressed by a farm laborer; the fingers of fire eating into a harvest hillside by night, each at the same careful diagonal; the unlikely impromptu New Year’s Day sing-along between Chris’s father and two announced guests, as unusually ambivalent tears prickle in his daughter’s eyes.

Soon this finesse pervades the film, as Davies’s peerless grasp of framing, editing, and camera movement finally reasserts itself; he throws up painterly image after painterly image regardless of whether what’s being shown is narratively significant or incidental. But while watching Davies in full flight is a joy in itself, his sheer talent for creating sensuous images conveniently masks how little of this feeling actually emerges from the plot these images illustrate. When Chris’s father suffers a stroke, it’s compelling primarily for how Davies captures the strange contortions of his body rather than the fact that a central character has been laid low. The same applies to the first few meetings between Chris and her future husband, Ewan (Kevin Guthrie), the sense of accompanying giddiness having less to do with two humans forming a tangible bond than with the sheer spectacle of seeing sheep jump and prance through the gap between them or the perfect symmetry of their placement on either side of a railway carriage as the camera pans out.

Although Chris and Ewan’s life as newlyweds is little more than a series of joyous impressions while they commune with the land and consummate their marriage, the inevitable arrival of World War I ushers in a fresh set of narrative turns whose grand-scale emotional payoff is irrevocably tied to the characters themselves rather than the pretty details that surround them. As tragedy repeatedly and wearyingly strikes, the drawbacks of Davies’s approach are brutally exposed, as none of the key dramatic scenes hit with anything like the same force as the individual visual flourishes they’re still often couched in. Deyn’s limited acting skills also carry part of the blame here; while she’s perfectly adequate when asked to just be another element of the mise-en-scène, her lack of an instinctive grasp for gesture, expression, and cadence become a problem whenever she’s required to emote directly or deliver the many tracts on the nature of the Scottish soul.

It’s telling that the true star of Sunset Song is the staircase in the Guthrie home, a seemingly innocuous passage that Davies returns to again and again, imbuing it with the invisible emotional residue of generations, a silent bystander to all the family’s myriad tribulations that feels more embodied than some of the family members themselves. This typically singular idea is at once evidence of Davies’s mastery and an indication that there are other, more satisfying ways of showcasing it, an accusation that can be leveled at Sunset Song as a whole. In Davies’s best work, his characters’ feelings and their representation are intertwined so completely it’s as if they’re one and the same, like how Hester’s recollections are born from a swirling cloud of cigarette smoke in The Deep Blue Sea or how childhood, cinema, and burgeoning desire undulate as one through The Long Day Closes. While Sunset Song itself doesn’t contain any such conveniently representative images, one equally appropriate one still comes to mind: an immaculately arranged still life, its subject a clod of thick Scottish earth.

Review: Paths of the Soul