“Georgetown 1990”: A college rowing team trains on the Potomac. Suited-up runners pass by. A tired movie way of introducing life at a big-city university. It’s been done a hundred times to code Harvard. But stay with it. Just a few minutes in, our skepticism about the racing shell turns sour in our mouths as we hear the details of a brutal serial killing, its victim a young boy, crucified on a pair of rowing oars. And that’s not the worst of it.

It’s 20 years after the events of The Exorcist, and, as it turns out, after the grim reign of a monster dubbed the Gemini Killer. Following the college athletics and campus atmospherics of the opening shots, we’re introduced—at first visually only—to Jesuit teacher Joe Dyer (Ed Flanders) and Detective Lieutenant Bill Kinderman (George C. Scott), linked for us to 1970 and to each other in a photograph we see on Kinderman’s desk.

A church is invaded by a howling wind. Statuary eyes open wide. Something very ancient and evil has returned.

Then there’s an Apocalypse Now-like shot of three helicopters coming at us out of the sunrise, guardian angels of a police investigation of the horrific murder. Examining the crime scene, Kinderman is confronted again with the m.o. of the Gemini Killer—an m.o. that a copycat couldn’t possibly know, since certain facts about the killings were altered in news reports, to enable the police to weed out false confessors. The Gemini case has never stopped haunting Kinderman, even though the killer himself, James Venamun, was killed by police two decades earlier.

Could the Gemini Killer could have been literally possessed, and, when he was killed, could that spirit have leapt into the body of Georgetown Jesuit Damien Karras, the eponymous exorcist of the 1973 film? The Exorcist III, William Peter Blatty’s own film version of Legion, his 1983 sequel to his best-selling novel The Exorcist, demands that we take the inexplicable seriously. Even as it never loses the literary wit, the puns, the cultural in-jokes of Blatty’s dark philosophical humor, it persistently insists that if things as horrific as the doings of the Gemini Killer can happen (and we know that they do, that the Gemini Killer is only one more fictitious reminder of the calculated cruelty human beings are capable of), then things as inexplicable as supernatural incursions, demonic possessions, and spiritual retaliations can too.

Blatty’s prime interest was always loss (or lack) of faith. No doubt Rosemary’s Baby and the iconic Time cover story “Is God Dead?” referenced in a cutaway in Polanski’s film had a powerful impact on the Lebanese Catholic, Jesuit-educated author of The Exorcist. Why, in the Age of Aquarius, were people so willing to believe in the devil and witchcraft, and utterly unable to believe in God? You can’t have one without the other, Bill Blatty proposed. The success of The Exorcist, for which he also wrote the screenplay, enabled Blatty to adapt his novel Twinkle, Twinkle, “Killer” Kane and to write, direct, and produce a film version, 1980’s The Ninth Configuration—a contemplation on God’s existence, on loss of faith, and on madness as submission to evil. As long on intellectual inquiry as it was on satirical humor, the film was a first sortie for Blatty’s all-out attack on unbelief in the summer of 1990.

Sure, sure, I hear you: Middling good novelist and screenwriter strikes it rich with a bestseller and a few screenplays and thinks he can direct, right? Well, few people love William Friedkin, John Boorman, and Paul Schrader as much as I do, but in my book, of the six or so films that have tried to turn that tortured title into a continuing franchise Blatty’s The Exorcist III is the best, hands down.

For one thing, the performances he evokes from Scott and Brad Dourif, as the Gemini Killer, and the words he puts into their mouths (writer-director as possessing spirit?), make for unforgettable, top-shelf characterizations. But he learned a lot from Blake Edwards and Friedkin, and by 1990 Blatty knew the camera, knew montage, had an eye and a genius for doing a few things the like of which we hadn’t seen before (and, as it turned out, wouldn’t see again).

The Exorcist III, though not as calculatedly surreal as The Ninth Configuration, boasts dream sequences, waking dreams, and chilling hallucinations neither we nor Kinderman can say aren’t real; for Blatty, one suspects, they are all the same. Kinderman’s detective work is continually interrupted by such visitations. “I’m crazy; that’s the only explanation,” he tells himself; his lifelong battle with Evil and his anger at an absent God have left him nearly unhinged.

The dream of what I like to call “Heaven Station,” a surreal vision of an antechamber of the afterlife, and the casual shot of an elderly woman from the Disturbed Ward crawling across the ceiling are among the creepiest moments in film.

And then there’s that hallway sequence. We watch from a fixed viewpoint, looking from one wing of a hospital ward toward the ward nurse’s reception area. In the dead silence, the night nurse hears noises that don’t belong, suspicious clinks. In the background, menial staff people come and go, and the unnerving noises continue, becoming unbearable. The nurse gets up from her desk and approaches one of the patient rooms. A cutaway doesn’t relieve the tension as she investigates the room, discovers melting ice tinkling in a water glass, and is about to leave as a figure rises from the bed. She’s awakened a doctor trying to grab some mid-shift shuteye, and he loudly and abusively berates her for it. She leaves and we return to our fixed view of the hall. A security guard appears, and takes a seat. Protection is at hand. There are more noises and another cutaway to the nurse’s view of the main door. But maybe it’s just her unease that makes everything seem menacing. She goes and checks the door, finds nothing. The security guard gets up and leaves. The night nurse walks back toward her desk and suddenly, all in white, the angel of death is behind her with surgical shears, there’s an unearthly non-musical stroke, and we cut to a statue of Christ, decapitated, in alabaster silence. It’s suspenseful, frightening, shocking—and so perfectly right that, God help us, we smile at its rightness in spite of its horror.

Not long afterward, another nurse (a bogus one) picked from the pool of minions in the Disturbed Ward, delivers a package to the Kinderman household, menacing the detective’s wife and daughter with a visitation that culminates in a seemingly obligatory last-minute rescue. It’s the weakest part of the film, but it isn’t gratuitous: It announces that the grudge between the Master and Kinderman has become personal. And it sets up a mad-room confrontation more riveting and meaningful than anything offered by the climaxes to The Exorcist or Exorcist II: The Heretic. Yes, physical damage is done, but the main thing is the words. Crucified without nails to the high wall of Cell 11, Kinderman recites an increasingly bitter list of the things he believes in—mostly the human capacity for evil and the non-intervention of an uncaring God. Blatty is interested in the words most of all: the dialectic of intellectual debate, the ritual litany of naming, the recitation of prayers. To name something is to tame it; Blatty is interested in our eternal struggle with the unnamable.

He wanted to call this movie Legion, same as the title of the novel, but the studio insisted on a title that would tie the film to The Exorcist. You might ask: Why Legion? It comes from the Gospel of Mark 5: 6-13, where Jesus confronts a man possessed by demons. “What is your name?” he asks, and the possessed man replies, “My name is Legion, for we are many.” You might, if you’ve heard that before, have thought that it means, “There are many like me.” But no, it means “There are many demons inside this man.”

And inside everyone, it seems. Blatty ended the novel with a conversation that did not survive into the film—at least not in words. Kinderman invokes both science and religion for the proposition that “all the known processes in nature were once part of a single, unified force…I believe that this force was a person who long ago tore himself into pieces because of his longing to shape his own being. That was the Fall…the ‘Big Bang’: the beginning of time and the material universe when the one became many—legion. And that is why God cannot interfere: evolution is this person growing back into himself.”

Not a bad subject for a movie.

Chucky Season Two Review: A Change in Scenery That’s Both Restrictive and Unwieldy 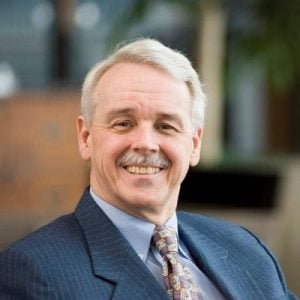 Robert C. Cumbow has been writing about film for over 40 years. His work has appeared in Film Comment, Film Quarterly, the Seattle Film Society journals Movietone News and The Informer, and numerous newspapers. He is the author of The Films of Sergio Leone and Order in the Universe: The Films of John Carpenter.