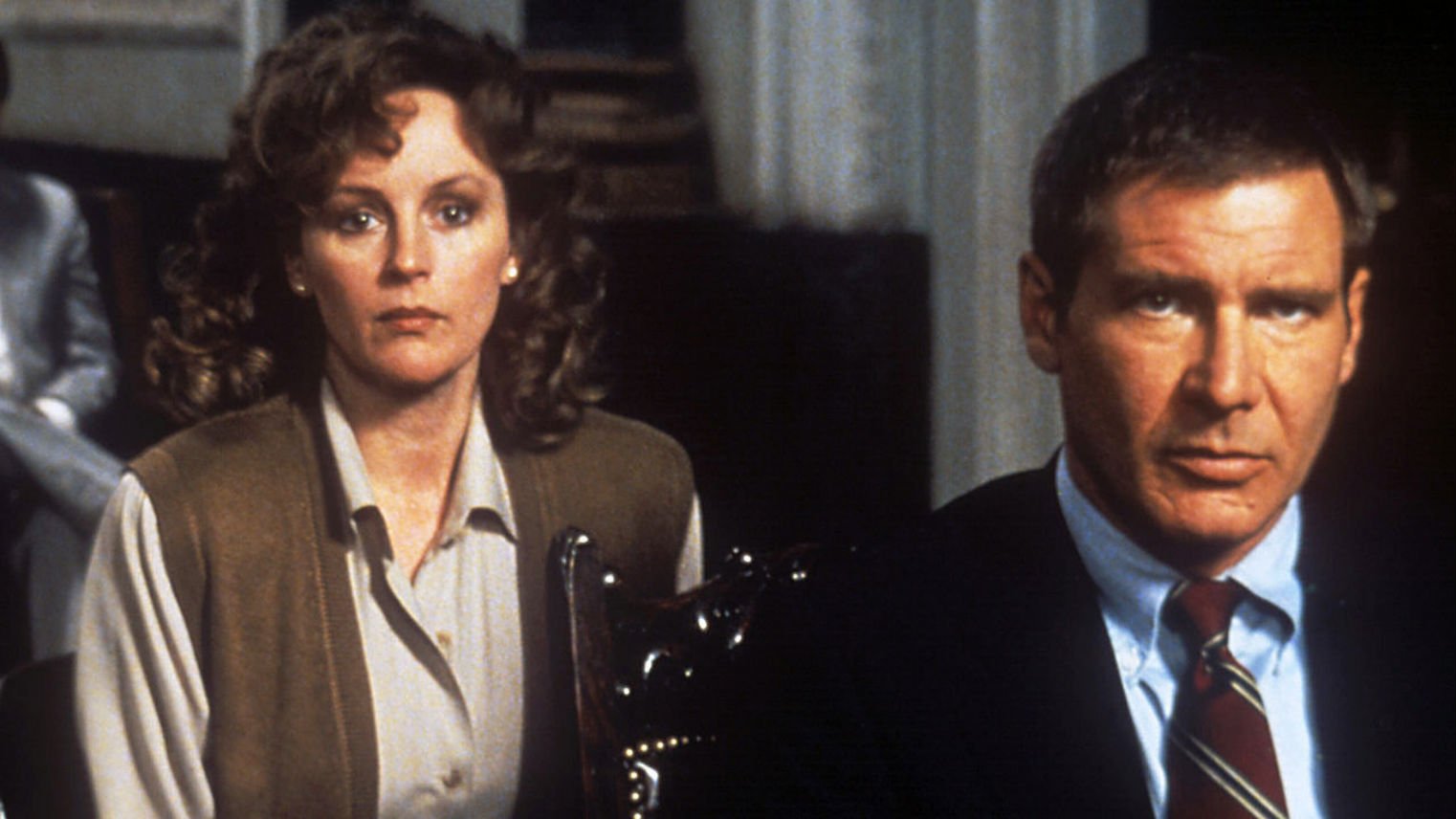 “That lady was bad news.” This is one of the many ominous phrases used to describe Carolyn Polhemus (Greta Scacchi), a deputy prosecutor whose brutal murder lies at center of Presumed Innocent. Detective Lipranzer (John Spencer) uses that specific expression more than once in reference to Carolyn, who was as widely known for her sexual exploits within the district attorney’s office as her crafty skills in the courtroom. Lipranzer is only a sideline character in the film, a friend and informant to Rusty Sabich (Harrison Ford), the prosecutor tasked with investigating Carolyn’s murder who quickly becomes the primary suspect. Nevertheless, Lipranzer’s summation of Carol is rife with implication and plays like a recurring melody in a symphony that resounds more profoundly with each expression.

On the surface, Presumed Innocent is a deft portrayal of the systemic corruption embedded in the legal system. Nearly every character manipulates, falsifies, or otherwise distorts as a means of staying one step ahead of the very system whose ethics and ideals they’re supposed to uphold, including and especially DA Raymond Horgan (Brian Dennehy). But pulsing through the film is an arguably darker current concerning sexual politics and power stemming from Carolyn’s beauty being regarded with fear and danger. Lipranzer’s comments are among many throughout the film that suggest a collective negative attitude toward Carolyn for being a woman who’d sleep with anyone to get to the top. Carolyn’s reputation is known even to Rusty’s own wife, Barbara (Bonnie Bedelia), who’s keenly aware of her husband’s previous affair with the victim. For the DA office’s men, whose preoccupations with Carolyn despite their own transgressions underline their hypocrisy, Carolyn was only “bad news” because she understood that the system was made to favor men and knew how to advance within it.

It’s tempting to indict Presumed Innocent for indulging in the same sexual pandering of which so many of its characters are guilty. Moreover, the focus on Rusty’s tribulations during the investigation and subsequent trial paired with Carolyn’s limited and distantly enigmatic presence on screen certainly lend credence to that reading of the film. But with the screenplay sticking mainly to the procedural aspects of a traditional courtroom drama, director Alan J. Pakula finds nuance in the material by keying in on the underlying tensions and strategic maneuverings of morally compromised people. And in this vein, the film’s understated aesthetic imparts a decidedly murkier sensibility regarding its own thematic implications.

Although Carolyn is only seen in flashback, these scenes have a haunting effect that’s more a byproduct of Pakula’s subtle directorial choices than the mechanizations of the narrative. What begins as silent visions of Carolyn as Rusty remembers her eventually morphs into long-form scenes in which we see their relationship develop while working on an unsettling case of child abuse. Whether in close-up or in wide shot, Pakula’s camera lingers on the faces of the actors as the two characters exchange an unspoken desire for each other. Carolyn, we discover, is far from the temptress that others would have one believe. Scacchi articulates an intelligence and confidence in Carolyn that’s only confounding to the men who refuse to see her as anything more than a beauty. Pakula also plays to Ford’s strengths, allowing the actor to use his face more than his words to convey the doubt, shame, and self-loathing Rusty experiences. The film may be more outright gripping during the courtroom scenes, but the quieter scenes between Ford and Scacchi leave more lasting impressions.

Take, for example, the scene in which Rusty and Carolyn first have sex. Pakula keeps the editing to a minimum and washes the actors in noirish contrasting light tones as they slowly move toward each other. The scene has a raw, stripped-down feel that’s all too rare in mainstream sex scenes. We’re not meant to identify with one character over the other, necessarily, but to instead play witness to a charged exchange in all of its mechanics and feeling. All of this plays out to the crescendoing chords of John Williams’s score (one of the composer’s best, by the way), alternating between romance and sinfulness before climaxing with shrilling Psycho-esque strings as the final shot locks on Carolyn’s orgasmic face.

Presumed Innocent is one of several popular films from the late ‘80s/early ‘90s that associated female sexuality with violence and male fear. It followed just three years after Fatal Attraction and two years before Basic Instinct, films both remembered for their modern iterations of the vamp, a cinematic representation of an antagonist female character who uses her sexual energy seduce and emasculate men. And yet, though the renewed popularity of the vamp during that period felt like a product of the time, little appears to have changed in 25 years. One of last year’s most popular films, Gone Girl, served up yet another version of this lore, going as far as to nudge the viewer into identifying with the glib douchebaggery of Ben Affleck’s protagonist in response to the psychosis of his unhinged wife, who not only thrives on, but makes it her life’s mission to bring him misery. Both Gone Girl and Presumed Innocent were based on popular novels of their time and share a surprising number of common elements (which, in the interest of avoiding spoilers in either case, I shall not divulge). However, whereas David Fincher’s film fits more in line with the likes of Fatal Attraction and Basic Instinct, reassuring the power of the male gaze and female otherness, Presumed Innocent presents a more intriguing and certainly more complicated portrait of cinema’s historic struggle with representations of female agency and sexuality.