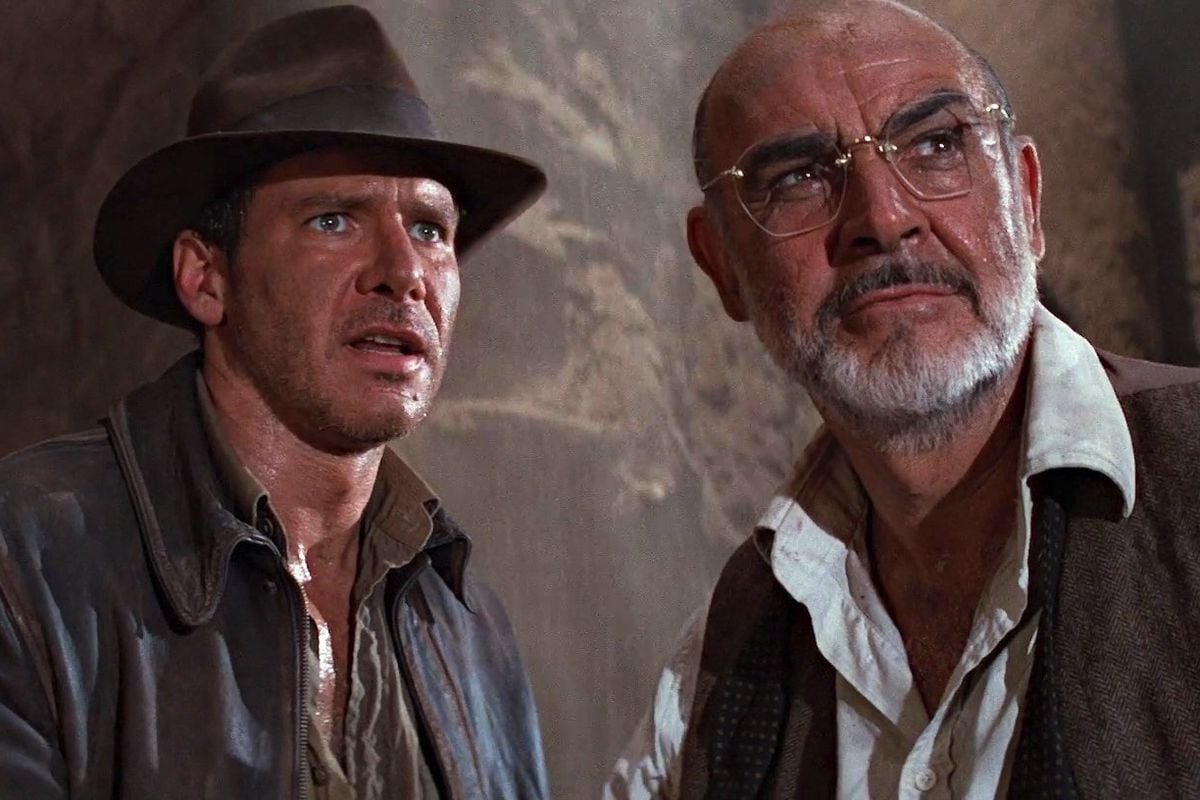 “I can remember the last time we had a drink together. I had a milk shake.” So Indiana Jones (Harrison Ford) tells his father, Henry Jones Sr. (Sean Connery), in one of Indiana Jones and the Last Crusade’s quiet interludes. After narrowly escaping the clutches of the Nazis on their unlikely quest to find the Holy Grail, Indy and his father spend their first private moment together childishly jibing back and forth, each refusing to take responsibility for their non-relationship. It’s the kind of scene that the actors carry off so well that it may prompt one to wish that the filmmakers had dwelled less on action and more on the personal. In fact, Connery’s defensive posturing along with Ford’s wide-eyed but befuddled expressions arguably tell a richer story about these polarized men than the film’s own elongated prologue establishing their bitter kinship.

Of course, the Indiana Jones series is better known for desert caravan chases and crawling bug-infested tunnels than for narrative depth and characterization. Last Crusade attempts to honor that legacy with an action quotient that arguably surpasses both Raiders and the Lost Ark and Indiana Jones and the Temple of Doom. Missing, though, are the evocative atmospheres and hard-edged-ness of those films. Moreover, most of the action scenes have a trivial and comic tone that arguably diminishes their impact (such as Indy’s magic bullet that flies through three Nazis in a row). Nevertheless, Last Crusade is made with no less technical skill and considerably more emotional weight than the previous outings, giving it a vibrancy and personal touch that easily compensates for its inconsistencies.

Take the motorcycle chase midway through the film, in which four Nazi riders pursue Indy and his father upon their escape from a German fortress. The scene plays out with Indy inventively dispatching each of riders in his typical off-the-cuff fashion. But then comes the payoff, when after the skirmish Indy’s proud smirk quickly turns to shame once he notices his father’s disapproving scowl. This brief moment gives the entire scene a magnitude beyond that of its ostensible function as another beat in a long string of obligatory chase sequences.

Perhaps director Steven Spielberg intuitively recognized that the old formula had gotten stale. His express disappointment with Temple of Doom in the wake of its release no doubt had a role in his decision to helm more humanistic stories such as The Color Purple and Empire of the Sun. Thus, while Last Crusade exhibits what appears to be the director’s growing disinterest in pulp storytelling, it also represents a unique marriage of his ever-more-disparate sensibilities as a filmmaker.

With each successive chase sequence, Spielberg reveals new shades to the central relationship between Indy and his father, cleverly using the film’s own worn-out conceits as a means of excavating its hero’s personal struggles. Jeffrey Boam’s episodic screenplay is chock-full of the expected set pieces, but each scene is zeroed in precisely on the father-son dynamic, and often with a lightness of touch that allows Ford and Connery to delineate the complicated relationship with even amounts of humor and gravitas.

Nearly every scene with them together offers a multitude of unspoken expressions amid their verbal spars that complicates and deepens their connection beyond the broader contrast of Connery’s distant, paternalistic figure and Ford’s boyishly flippant gestures. Notice, for example, the dismissing tone in Ford’s voice in the scene in which Indy and his father are tied back-to-back and flames are quickly engulfing the room. When Henry Sr. has “something to tell” him, Indy casually retorts: “Don’t get sentimental now, Dad. Save it ‘till we get outta here,” to which Henry Sr. replies, “The floor is on fire,” a line that Connery delivers with a hint of pride simply because Indy is wrong.

Not all of the material works though. The film stumbles when it blends Indy and his father’s relationship with the religious undercurrents involving the Holy Grail. Since the quest for the Grail is already emblematic of the search for a spiritual father, the symbolic value of its relationship to the film’s primary focus of an estranged father and son hardly needs to be stated. But that doesn’t stop Spielberg from doing just that. The final act hinges on a convergence of the two plotlines and is arguably the weakest portion of the film, wherein the themes of eternal life and faith are muddled and shoehorned in out of convenience, never feeling like a true outgrowth of the dynamic between Indy and his father.

Last Crusade is also impaired by its many reflexive attempts to emulate the more aesthetically and narratively pristine Raiders and the Lost Ark. These parallels frequently come across flat and disingenuous, principally since Last Crusade exhibits little of its predecessor’s stylistic mastery and shear thrill of storytelling, underlined by the presence of key players from Raiders and the Lost Ark in a comic-relief capacity—namely Marcus Brody (Denholm Elliott) and Sallah (John Rhys-Davies). In addition, the Nazis are less menacing this time around. In fact, only once does the film seem to have a sense of stakes and high adventure, and that’s during the tank sequence in the desert when Indy faces off with Vogel (Michael Byrne).

Yet, for all its deficiencies and inconsistencies, Last Crusade endears itself to audiences by the utter idiosyncrasy of its execution. Many of the same elements that render it problematic also make it distinctive and memorable. But what makes it especially unique is that it serves up the old elements without ever compromising its emotional center. Using the very tired conventions and masculine norms of the genre, Spielberg, Ford, and Connery spin a deft and sensitive portrait of a father and son’s rediscovery of each other and themselves in the process. Indy and his father never forgive each other, nor do they outwardly acknowledge their mutual respect toward one another in spite of their vast differences. But one imagines many fathers and sons watching this film and feeling a sense of comfort that although some love may not be spoken, it’s still there, no matter stubbornly we pretend it isn’t.