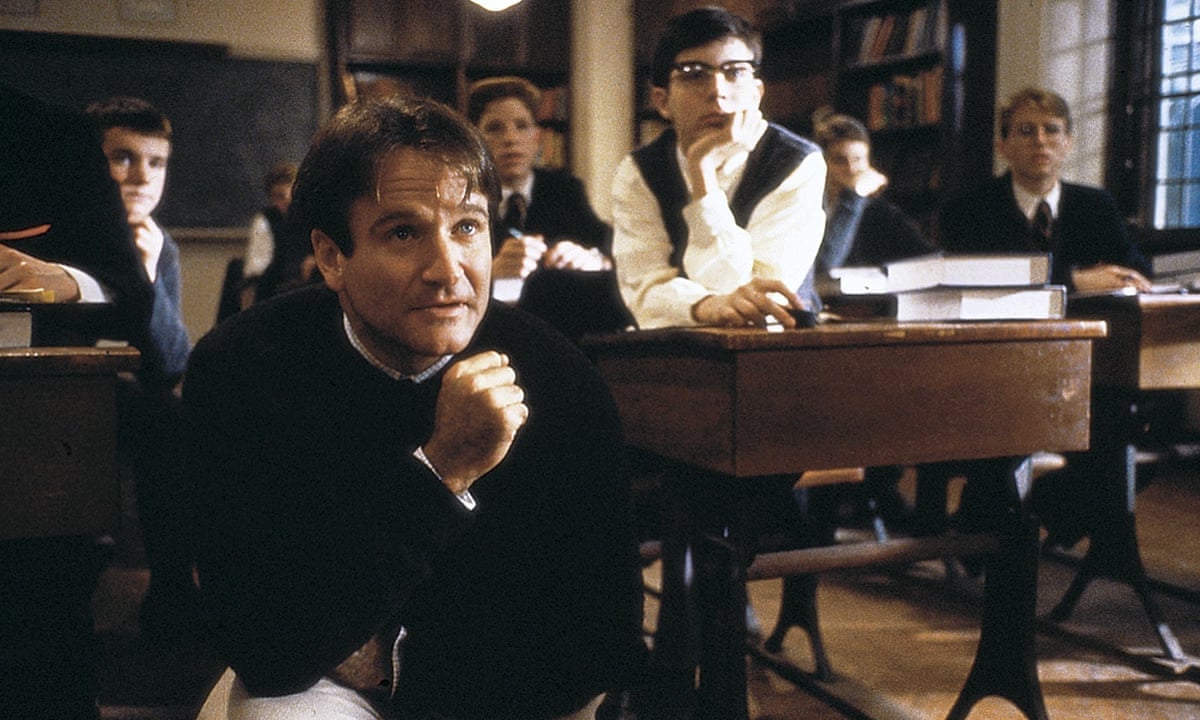 Peter Weir’s Dead Poets Society purports to be about the bravery of following one’s own path. This is a bright, shining lie, one the film is ballsy enough to tell to your face. It makes examples of those who march to the beat of a different drummer by crushing them with the drum kit. Those who stay in line get to cover their asses before making empty gestures of sympathy toward the people they helped destroy. A more conformist, less inspirational piece of cinema would be hard to find.

And yet, this was perceived as “inspirational” by the audiences that made it a hit in 1989; by the Academy, which nominated it for Best Picture; and by the AFI, which lists the film at #52 on its list of the 100 most inspiring movies of all time. That’s higher than A Raisin in the Sun, Sergeant York, Sounder, Shane, and two far better examples of its own inspirational-teacher genre, Fame and Stand and Deliver.

Dead Poets Society takes place in 1959 at Welton Academy, one of those enormous, stuffy prep schools beloved by old Hollywood, British people, and Academy voters. The students are as white as the snow that falls every winter, and just as cold and blasé. Into their standard, almost militaristic existence comes replacement English teacher John Keating (Robin Williams), an alumnus whose claim to fame was creating the titular institute. Keating, like all stereotypical move teachers, is a bit looser than his predecessor: He calls bullshit on the standard way of teaching poetry, takes the kids outside for lessons and, during his first day of class, utters the one of the AFI’s top-100 greatest movie quotes:

And how do these boys carpe their diem? By resurrecting Keating’s Dead Poets Society. There’s no mention of why this is a radical idea, because none exists. Any high school kid will tell you poetry is evil. The Dead Poets Society is a group of kids who sneak out into the woods to quote Thoreau and read poetry that isn’t assigned by their teacher. In other words, they’re doing extra credit work! What school would be against this? Welton Academy, of course, and the school’s objections lead, in most convoluted fashion, to the ouster of our beloved teacher.

Tom Schulman’s script manufactures every conflict, making mountains out of molehills. No reason is given for the school’s dislike of the Dead Poets Society, yet it becomes the linchpin in the case against Keating. The film’s tragic character, Neil Perry (Robert Sean Leonard), is an A student whose desire to do Shakespeare angers his father beyond logical sense. Mr. Perry wants Neil to be a doctor, but his hatred of extra-curricular activity is established long before Neil gets the acting bug. Neil’s sudden desire to act comes completely out of leftfield, because Schulman needs an arbitrary act of rebellion to keep the plot churning.

The villains are as overbaked as mustache-twirling silent-movie antagonists. Much animosity is expended on the most paltry and petty of indiscretions. St. Elsewhere’s Norman Lloyd plays the strict headmaster who, when tragedy strikes, wages that ridiculous war against Keating, while Dylan Kussman, as Richard Cameron, turns evil for no reason other than to set up an audience-pleasing ass-kicking. And Kurtwood Smith is completely neutered as Neil’s father: Had the actor played this role like RoboCop’s Clarence Boddicker, one might see how his son would be terrified of him, but he just glowers and speaks in a low voice, which isn’t enough to scare Morris the Cat let alone Dr. Wilson from House.

The most egregious thing about Dead Poets Society is how not one person takes the inspirational teacher’s advice when it matters, even after the death of the one character who dared to seize his day. Every student folds when it matters most: defending their beloved teacher. Yet, after the damage has been done and the threat of repercussion has passed, several of these same students stand on their desks to honor their now fired hero. “Oh Captain, my Captain!” they recite in a moment of Walt Whitman-inspired “solidarity” with Keating. Keating is touched, but he should have called bullshit on these cowards. He should have kicked the desk from under a former student and screamed, “Where was your courage when it was inconvenient? You can’t seize a day that’s already passed!” Instead, Dead Poets Society ends with Keating’s thanks, which serve as a stamp of approval against the always painful urge to do the right thing, no matter how inconvenient.

Speaking of Do the Right Thing, Dead Poets Society won the Oscar for Best Original Screenplay over Spike Lee’s masterpiece. This belongs in the same league of protest as Ordinary People and Dances with Wolves winning Best Picture over Raging Bull and Goodfellas, respectively. Yet I rarely hear about this in critics’ circles, because, with an 85% approval rating on Rotten Tomatoes, it seems you’re in the minority if you find this movie reprehensible. Somewhere, John Keating smiles at me for choosing my own path. He might be eating cat food and burning poetry books for heat because he’s out of work, but he’d smile nonetheless. Carpe diem, indeed.