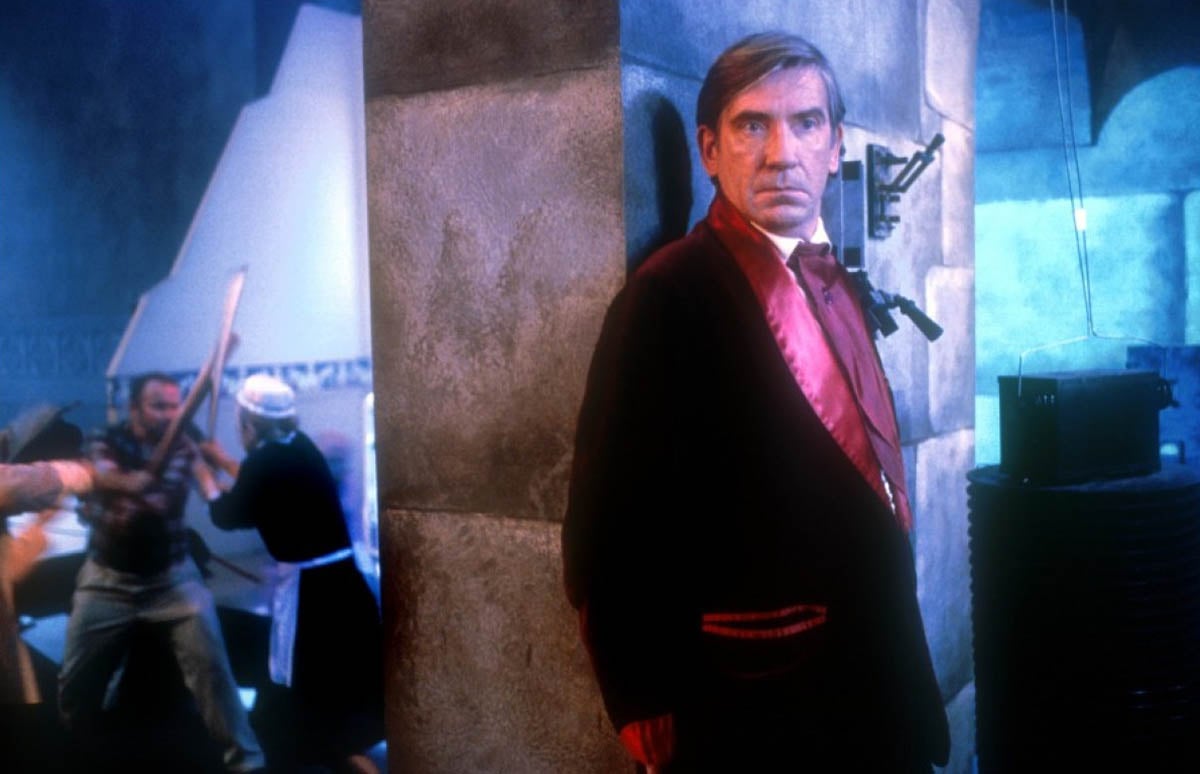 The Cabin in the Woods ends with a deliriously apocalyptic Grand Guignol in which just about every ghoulie that’s ever appeared in a horror movie is released from a subterranean prison to wreak bloody mayhem on their captors. But Joss Whedon and Drew Goddard were hardly the first to conceive of a finale of that kind, and on that kind of massive scale. The 1988 horror yarn Waxwork ends with a band of hunters—including Valley Girl’s Deborah Foreman and Gremlins star Zach Galligan—facing off against a slew of vampires, werewolves, mummies, zombies, even an Audrey II-like man-eating plant in a wax museum-set battle royale over the fate of mankind. Notwithstanding a very-‘80s proliferation of cheesy one-liners before the heroes dispatch the various villains, this finale exudes a similar no-holds-barred spirit that the climax of The Cabin in the Woods would tap into 23 years later, albeit with a bigger budget and even less abandon.

For me, The Cabin in the Woods was condescending in its deconstruction of horror conventions, wrapped in a smart-ass concept—a government agency presiding over the fates of a bunch of innocent cabin-dwellers, not unlike filmmakers trying to come up with an audience-savvy product—that eventually turned its contempt toward the audience, supposedly for uncritically eating up this crap without desiring more from their entertainment. Waxwork isn’t nearly as clever, to be sure, and its execution is at times clumsy, especially with its wobbly sorta-campy tone. (The broad caricatures and cheesy acting in the film’s first 15 minutes alone are cringe-inducing.) But for all its shakiness and obvious low budget, Anthony Hickox’s film does at least display a sincere love for the horror classics to which it pays tribute, even going so far as to shoot a Night of the Living Dead-inspired sequence in black and white to match its source material. In other words, Waxwork is thankfully free of Whedon and Goddard’s smugness.

That isn’t to suggest that Hickox doesn’t have a vision of his own beyond the cinephile shout-outs. The film’s premise is indebted to some degree to films like André de Toth’s 1953 3D classic House of Wax, which also basically revolved around lifelike wax figures that were more real than one could possibly imagine. But Waxwork is certainly no period piece. Just about everything in its opening scenes screams “I love the ‘80s!”—from the synthesizer-laden score to the clothing and hairstyles to the characterizations themselves. Galligan’s Mark, for instance, is a wealthy college-student slacker who seems to have no problem handing a homework assignment to his maid, who barely speaks English, to write for him—and given his sense of lazy entitlement, one could possibly see him going the way of Patrick Bateman in the future.

Still, once Mark and his band of privileged, self-absorbed preppies enter the wax museum owned by David Warner’s unnamed museum owner, they find themselves strangely enraptured by wax figures from different worlds and older eras—to the point that, once the rope stand that separates spectators from the displays spontaneously drops to the floor, the characters walk onto the displays and literally enter these locales. This is, of course, the devious way the museum owner entraps his victims: killing them in these worlds and thereby encasing them in wax forever. “Waxworks are out of date; this is the video age,” says one character—and Waxwork is, in essence, a horror comedy about characters who find their distance from images of the past dangerously, even fatally, bridged. This clash between old and new is reflected in more subtle ways than just its main concept. There’s also the casting of British acting veterans Warner, John Rhys-Davies, and Patrick Macnee alongside younger Americans like Galligan, Foreman, and a pre-Twin Peaks Dana Ashbrook—and the contrast between the experience of the British actors and the (deliberate?) broad awkwardness of the youngsters couldn’t be more evident. But perhaps the most interesting manifestation of this clash lies in Roger Bellon’s music score, which alternates between synthesizer-led cues in the present-day “reality” scenes and more classical-sounding orchestral ones in the wax-museum scenes (Bellon even throws in explicit references to Tchaikovsky’s Swan Lake and the “interrupted intermezzo” of Béla Bartók’s Concerto for Orchestra for good measure).

Alas, this intriguing self-aware thematic thread ends up not being explored in much depth as its anthology-like structure eventually leads into a fairly predictable end-of-the-world threat. Waxwork is certainly no hidden horror gem, but its flashes of wit and genuine enthusiasm for the horror genre are enough to make it a reasonably enjoyable time—especially after an ostensible tribute as insufferably clever as The Cabin in the Woods.