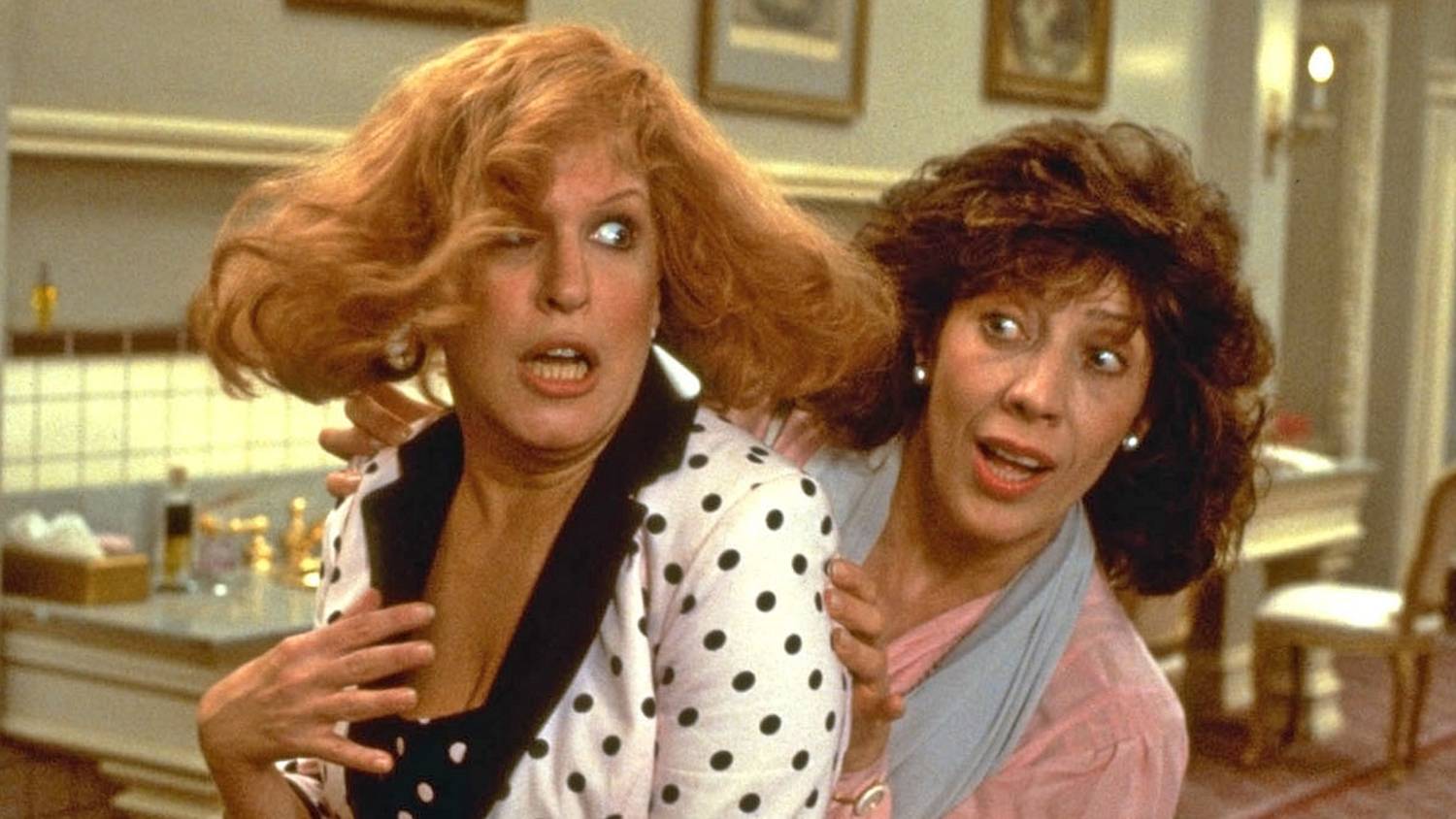 The premise of Big Business is so preposterous and shaky, it simply needs to be swept under the rug as soon as the film begins. The idea of two sets of identical twins separated at birth, and who then unwittingly run into each other when older, is such a blatant device for manufacturing confusion, it works best when accepted at face value. While Shakespeare made a single monologue do all the heavy plot-lifting in the first scene of The Comedy of Errors, Jim Abrahams orchestrates the film’s elaborate switcheroo under the opening credits, timing it to Benny Goodman’s version of “Sing, Sing, Sing (With a Swing)”—and achieving full transparency without a single line of explanatory dialogue.

No sooner are the twins mismatched by an absent-minded nurse than we flash-forward to contemporary—that is to say, late-‘80s corporate-happy—New York. Sadie and Rose Shelton (Bette Midler and Lily Tomlin) are heiresses to the huge corporation of Moramax, about to chop off an unprofitable branch in the form of backwoods-based Hollowmade. Local resistance to the move is organized by none other than Sadie and Rose Ratliff (played by…you guessed it), who decide to take a desperate step and go right up to Moramax HQ to “raise some hell and kick some snooty New York ass.” Thus the two pairs of twins are set on a slow-burning collision course toward their inevitable reunion.

The film’s best joke is that one sister from each pair of twins thrives while the other one wilts away due to her misplacement. The country-mouse Sadie is sick of pig-wrestling and barn-raising, and dreams of New York glitz, while the city-mouse Rose is a bleeding-heart shrinking violet, yearning for simple pleasures the Big Apple seems devoid of. However offensive this premise is at its core (it’s basically Trading Places, with nature winning over nurture due to apparent wealth and impoverished genes), it’s responsible for the best parts of the film. There’s a sense that the city-mouse Rose and county-mouse Sadie are on a quest to find themselves, and their parallel journeys are at the film’s emotional core—with Rose having the extra luck of being wooed by an impossible-to-resist redneck sweetheart played by Fred Ward.

The film shares some of the yokel-in-the-big-city humor with another 1988 hit, Crocodile Dundee II, but it’s main attraction is its paring of two great comediennes. There’s no question that Tomlin gets the short end of the stick, as few can withstand the presence of one Midler, let alone two. Midler radiates comic assurance from her very first entrance as the corporate-bitch Sadie, and as soon as the elevator door at Moramax opens, revealing her shoulder-padded trunk and Kriemhild-like gaze, she’s a force of nature that must be reckoned with. It’s right there and then that she deploys what has become one of Big Business’s signature conceits: the sudden bulging of the eyes, which would make the devil herself jump out of her Prada and take notes. “Get tougher rats,” Sadie demands of her minions after hearing of the high mortality rate among the test animals used in her cosmetic company’s laboratory.

The same eyes that are on the verge of shooting out stilettos become all sparks and excitement when we witness the country-mouse Sadie taking in all the riches of New York. The joy of Midler’s shape-shifting performance is of the same stripe she exuded in her 1980 one-woman show Divine Madness, and though Tomlin is equally at home playing multiple characters (she dazzled in the stage production of The Search for Signs of Intelligent Life in the Universe two years earlier), she’s no match against her bulldozing co-star. Big Business may be Midler’s ultimate vehicle, allowing the actress to wildly embrace her talent for both shrill bombast (that was her only dimension in Ruthless People) and that sensitive eagerness for life and pleasure that stoked her career-making performance in The Rose.

The film, which Pauline Kael professed almost made her fall off her seat laughing, is frustratingly uneven, with more than one comic possibility wasted and the mechanism choking up on its own intricacies. Most of the screenplay is founded on the theatrical device of identical twins constantly missing each other and unwittingly creating ever-increasing layers of confusion. In the final 10 minutes, all four main characters share the screen at once, but after the visually effective riff on the Duck Soup mirror routine, Big Business generates little comic mileage. Shakespeare knew that, for this particular plot, story confrontation means termination: His Comedy of Errors isn’t about confronting a doppelganger (or twin), but about constantly redefining oneself against an environment that suddenly reacts to us completely anew. Abrahams drags things too long, and he can’t resist a Capraesque ending that seems rather dumb, but as a showcase for a comedienne’s talent, Big Business is in a class all its own.