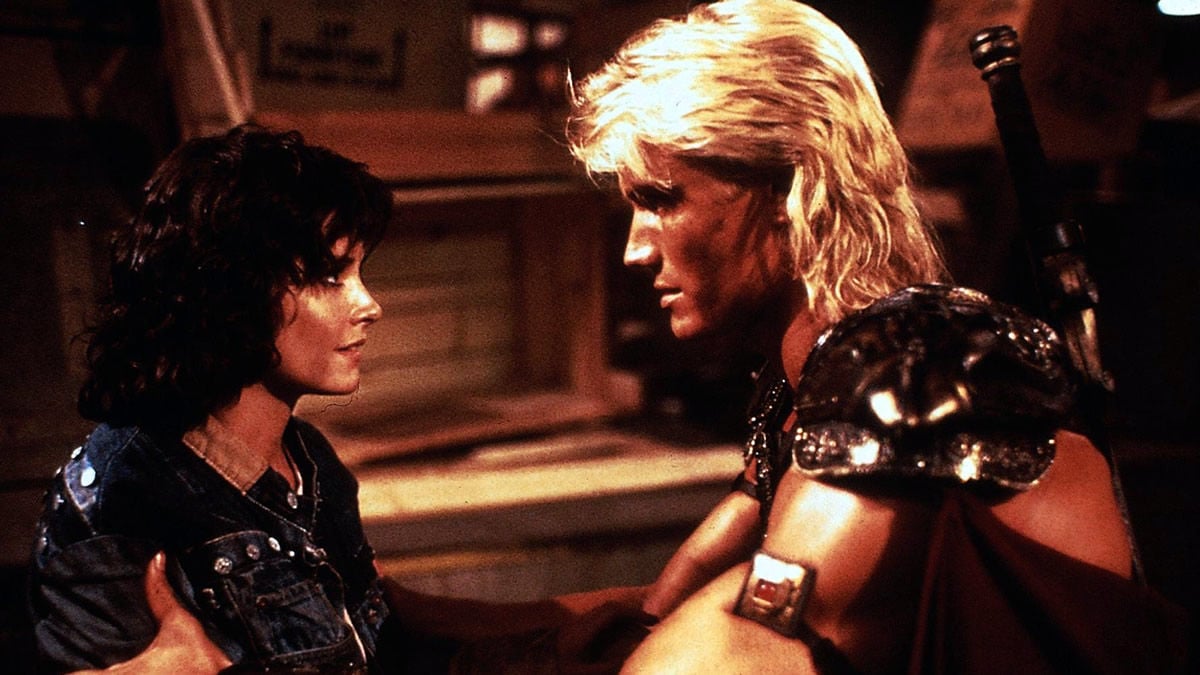 I wonder what a He-Man tent-pole film would look like in our current comic book-obsessed, event picture landscape we call modern-day Hollywood. Whatever direction the project would take (origin story; psychologically dark; epic CGI), there’s no way in hell it could resemble Gary Goddard’s jarring mix of corny screwball comedy and choppy action heroics, 1987’s Masters of the Universe. While time has not been kind to this blatantly ridiculous superhero film, it’s still refreshing to know that a “big budget” sci-fi saga based on a popular 1980s cartoon is this manic and strange, even going as far as making its ox of a star, bulging bicep titan He-Man (Dolph Lundgren), the lone voice of reason in a sea of obliviousness. Immediately after a crippling laser shootout occurs between the forces of Grayskull and the dark hooded stormtroopers employed by the evil dictator Skeletor (a masked Frank Langella), the sweaty He-Man tells his loyal brood Man-at-Arms (Jon Cypher) and Teela (Chelsea Field) that “we’re all in this together.” I’m not sure what’s more hilarious, Lundgren’s wonderfully sincere line delivery or the fact that all of the other actors seem on the precipice of explosive laughter.

Such small comedic details, not to mention the film’s fascinating shifts in tone and aesthetic design, make Masters of the Universe consistently watchable despite its bungling of the most basic filmmaking craft. Everything from the elaborate Medieval-style interiors to the gloriously striking blues and greens provides the movie with a specific, time-stamped identity. But its plot is haphazard at best and inane at worst: the musically inclined Cosmic Key developed by the dwarf inventor Gwildor (Billy Barty) holds the power to travel from one universe to the next by playing specific notes, attracting the conspicuous gaze of both good and evil. Interestingly, the motif of musical expression provides another beguiling juxtaposition to He-Man’s role as a sensitive warrior. In a desperate attempt to steal the Cosmic Key away from Skeletor and halt his advances in their native Eternia, He-Man and his wild bunch pick a random planet (Earth!) to hole up on while Gwildor attempts to reprogram the time-traveling device. Of course, Skeletor follows, eventually sending a mercenary squad of brutish assassins to secretly invade Small Town U.S.A., complicating the lives of two good-hearted humans named Julie (Courteney Cox) and Kevin (Robert Duncan McNeill) in the process.

Like so many 1980s genre films, Masters of Universe buries themes of paranoia and fear underneath its silly action façade. While Skeletor’s fascist presence on Earth is never mistaken as anything but by He-Man and company, supporting characters like Detective Lubic (James Tolkan), who have no context for the fantastic situation, react to the sudden onslaught of floating hovercrafts and troop columns by thinking the Communists have finally infiltrated America’s borders. Upon witnessing a fireworks show of exploding cars and infrastructure, Lubic turns to an equally befuddled character and asks, “You don’t think they could be Russian.” While it’s all played for laughs, the underlying fear of outside manipulation remains a powerful dichotomy on both Earth and Eternia, a thread that is also referenced earlier in the film when Skeletor gives a striking retort to an underling questioning his ambition: “I dare anything.”

In the end, it’s the strength of individualism and not He-Man’s Sword of Power that provides the fatal blow to Skeletor’s reign of darkness. Kevin and Julie’s emotional reconnection and appreciation for each other, along with the consistently awesome theme of musical improvisation, feed into the earnest realization that there’s “only one of anybody,” as Gwildor so aptly puts it. He-Man is ultimately inspired by his human counterparts to defeat the masked nemesis Skeletor, a beast not ironically hiding his own true identity from the rest of the world. This all goes hand-in-hand with Masters of the Universe’s overtly anti-communist slant, further revealing its admiration for American resolve and the impromptu ability to emotionally/physically adapt in the face of foreign evil. When you’re dealing with a film that suffers from such hilariously awful formalist qualities like the mind-numbing synthesizer score or specific fight sequences that can’t even manage a proper match on action, these are the kinds of details one must cherish to stay sane and “live the journey.”

Review: Dreams of a Life