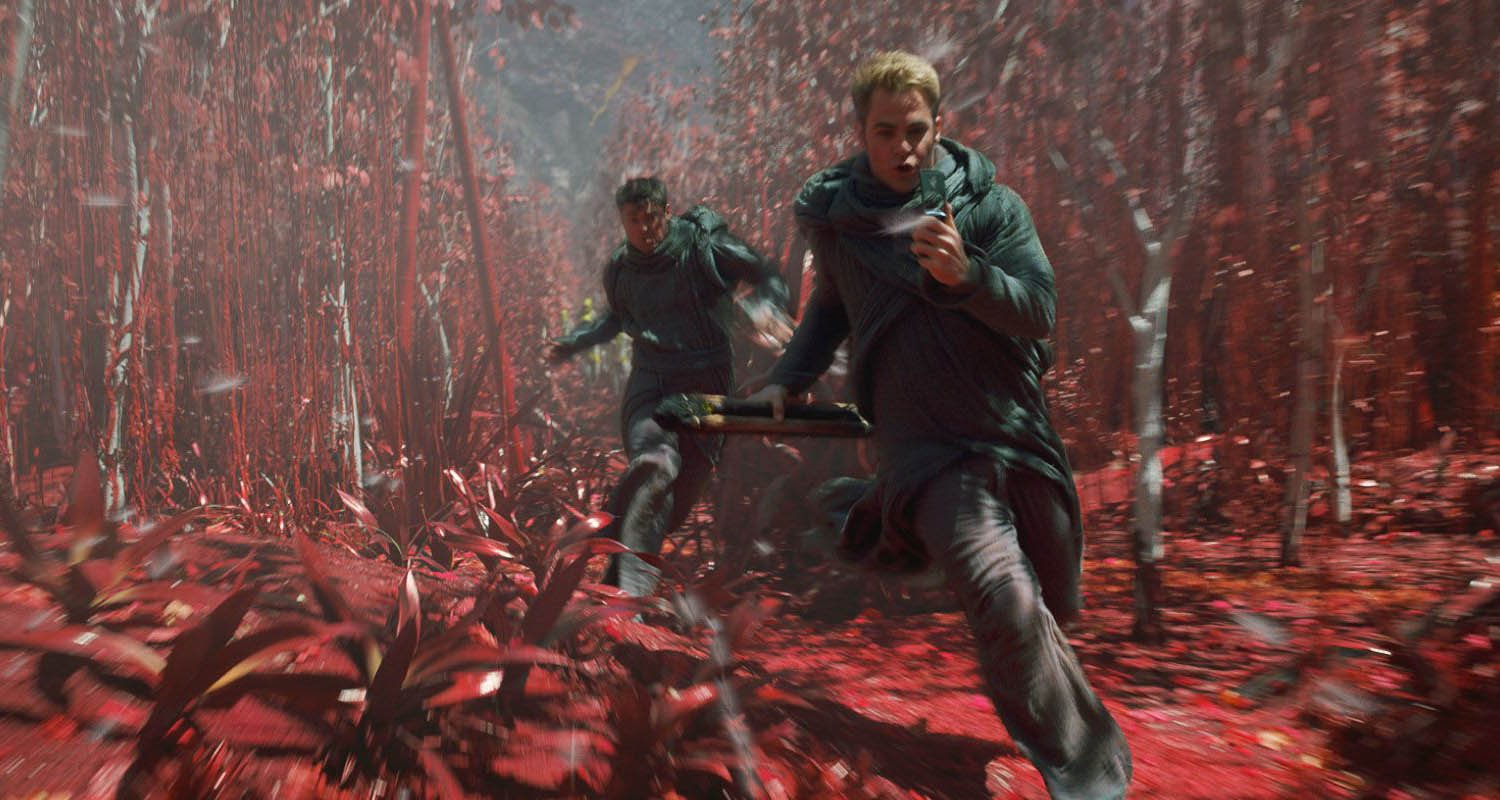 The thrill and peril of revisiting and revising history served not only as a mission statement for J.J. Abrams’s Star Trek, but also as the chief thematic concern of the narrative, involving dueling attempts to alter or recreate history rather than accept it. Abrams essentially successfully recreated popular myth by highlighting his own unease in undertaking such a tremendous task, and the result was a film that exceeded nearly every other filmic iteration of the series.

As such, it’s not exactly surprising that Star Trek Into Darkness compounds that unease and further dismantles accepted mythology. Still, it’s a reassuring sign that Abrams and his collaborators continue to chart their own distinct path through the final frontier. There’s an ironic punch, then, to the film opening with Captain James T. Kirk (Christopher Pine) and First Officer Spock’s (Zachary Quinto) inability to practice anonymity, following an exhilarating last-minute rescue of Spock from the gut of an active volcano. For Kirk, the issue is less the demotion he receives from father-figure Admiral Pike (Bruce Greenwood) than Spock’s willingness to follow the prime directive, even at the expense of his life or their friendship. Uhura (Zoe Saldana), Spock’s long-term partner, isn’t very pleased with this either, as it turns out.

For Abrams, the Spock/Kirk dynamic serves as both central dramatic relationship and a perfect abstraction of the creative process of deciding when to indulge the mythology of the series created by Gene Rodenberry and when to trust one’s own sense of creation—the personal versus the proven, played out as intergalactic action-melodrama. (Spoilers herein.) And like the film, Kirk is stripped of his own rebuilt sense of personal history early on, when Pike is murdered during an attack engineered by John Harrison (Benedict Cumberbatch), a mysterious traitor in the Starfleet ranks who’s hiding out on Qo’noS, home planet of the Klingons. Left mourning and in need of vengeance, Kirk comes under the tutelage of Admiral Marcus (Peter Weller), who sends him to destroy Qo’noS and Harrison with a cadre of new weaponry.

Even more than its predecessor, Star Trek Into Darkness is densely plotted, and occasionally borders on the convoluted, but the clarity and inventiveness of the direction keeps the drama and action constantly percolating. This comes in handy when it’s revealed that Harrison is, in fact, Khan, an engineered super-being awakened from cryogenic slumber to help create weaponry for Starfleet’s attack on Qo’noS. The revelation of Admiral Marcus’s warmongering, made by an initially helpful Khan, dismantles Kirk’s newly reinforced ideal of Starfleet as do-gooders, but also bonds him to his enemy, and the script rebuilds the rivalry between Kirk and Khan with a rousing sense of moral complexity. Khan isn’t sketched in terms of the perceived evil of his actions, but by his potent ideas and knowledge, which are corrupted by a need for violent vengeance.

Put simply, Khan is Kirk left to his own devices, without his trusted crewmembers to offer wisdom and counsel. His need for his crew is mirrored in Abrams’s shrewdly democratic sense of developing action, the precision of which feels almost too perfectly calibrated at points. The ambitions and moral weight of the narrative, however, are so striking that the film never feels particularly overwrought. With less major set pieces than its predecessor and a scant amount of creatures, Star Trek Into Darkness strides like a sci-fi box-office behemoth, but has the emotional rigors of poison-tipped melodrama. In this, the inevitable comparisons to The Empire Strikes Back are absolutely justified.

This isn’t to say that the film lacks muscle: a shoot-out with a battalion of Klingons, the Enterprise’s powerless free fall, and Spock and Khan’s climactic duel in the sky above San Francisco all afford thrilling action to match the emotional lacerations that the Enterprise crewmembers must endure, from without and within. At first glance, the film seems to just reiterate the structure and trials of its predecessor by focusing again on the battle between Kirk’s ego and Spock’s logic, but the stakes have clearly been raised, the moral knot further tightened and tangled. Kirk is no longer seeking an identity for himself, but also for those he must lead, as he watches his idols either die or become violent cowards. The struggle to become both an individual and a leader simultaneously, without the crutch of established honor, has obvious underpinnings for Abrams, a brilliant director who now finds himself watching George Lucas’s throne. That struggle doesn’t come to an easy, quick, or certain conclusion for anyone in Star Trek Into Darkness, which is more defined by inner demons and emotional gamesmanship than warp drives and photon torpedoes.