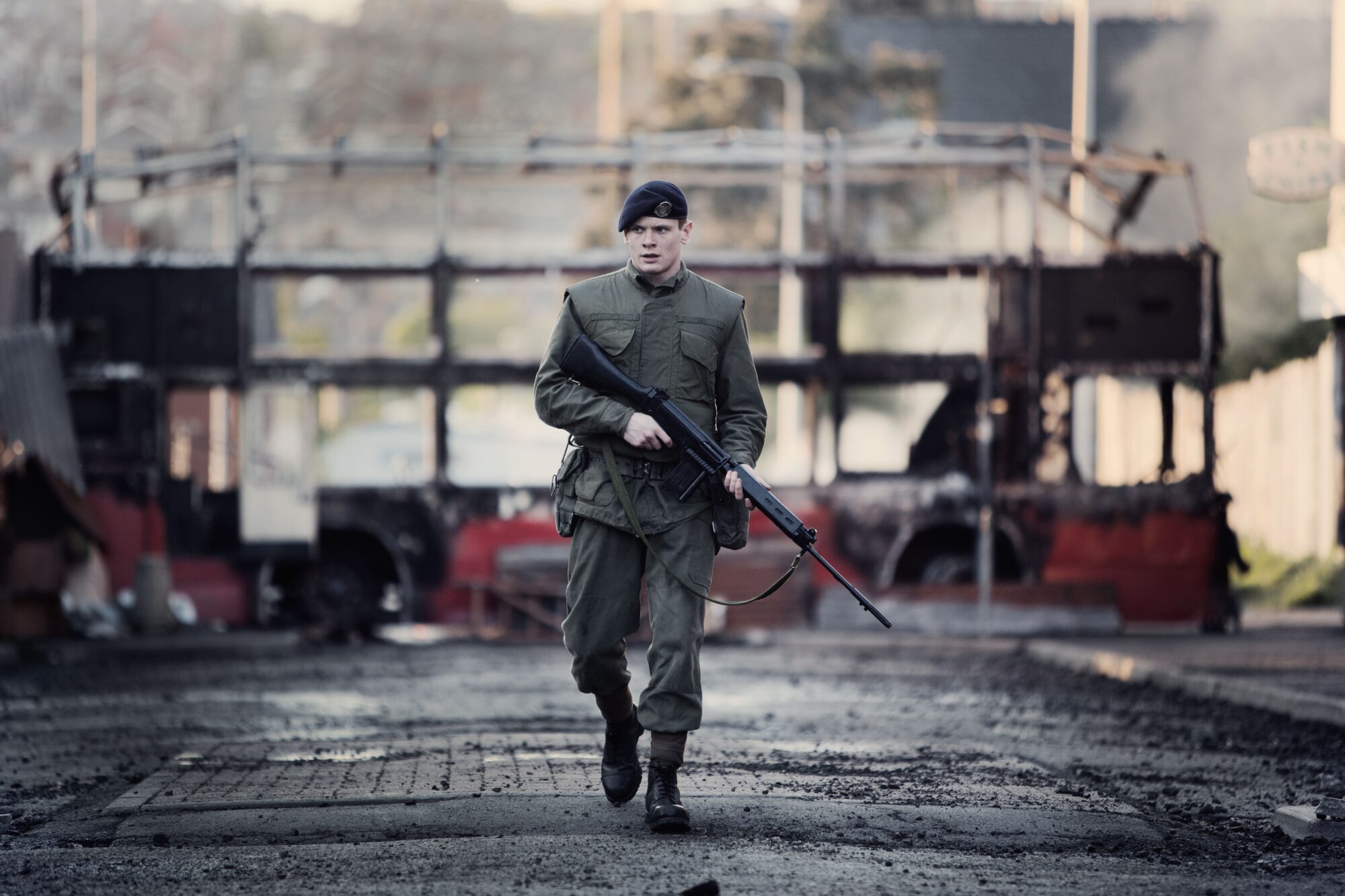 Yann Demange’s ‘71 offers the latest test case for that never-ending question of whether it’s possible to wring white-knuckle entertainment out of a painful real-life atrocity without veering into crass exploitation. Demange’s debut follows the Paul Greengrass stylistic playbook in many ways: shaky-cam handheld aesthetic, broad characterizations, and an overall attention to gritty realism. But it distinguishes itself from Greengrass’s films by virtue of its close attention to political and moral ambiguities; unlike Greengrass, Demange isn’t content to let the nuances of his material take care of themselves. Its backdrop is the Troubles, the three-decade-long conflict that pitted Irish nationalists against unionists, the former fighting to bring British rule in Northern Ireland to an end. But though screenwriter Gregory Burke doesn’t delve all that deeply into historical context, neither is he merely interested in plopping us into the middle of the maelstrom and forcing audiences to draw their own conclusions. ’71, it turns out, is as much a character drama as it is a smashingly effective action thriller.

Not that the character drama is especially deep. ’71 is essentially a classic loss-of-innocence drama, as the story’s hero, Gary Hook (Jack O’Connell), learns, in an overnight trial-by-fire ordeal, that neither side is as black and white as perhaps he would like to believe. But thanks in large part to O’Connell’s magnetically desperate performance, this potentially clichéd dramatic arc registers quite powerfully: We aren’t only immersed in a particularly dire situation, but are also put into the mindset of a character awakening to complexities just beyond his grasp. That certainly offers more perspective than Greengrass provided in Bloody Sunday, which tackled the Troubles through a more journalistic vein.

The cast of characters that surround the taciturn protagonist all offer glimpses of the real-world complexities Gary slowly begins to grasp. It’s telling, for instance, that Gary’s ordeal begins as the result not of one side or another looking to make a violent statement, but of a couple of hotheaded renegades who, it turns out, vehemently disagree with their superior’s more restrained approach. Even within that rebel faction, there’s Sean (Barry Keoghan), a young and easily impressionable teenager who eventually has his own naïveté shattered when he comes face to face with Gary and is confronted with the prospect of having to execute him in the name of the larger cause. And there are the innocent civilians caught in the middle, exemplified here by a father, ex-army medic Eamon (Richard Dormer), who charitably cares for him despite his daughter Brigid’s (Charlie Murphy) protests that they shouldn’t get involved.

All of this might have played as heavy-handed allegory in a different context, but by adhering to grim realism, Demange ensures we’re always as caught up with the people involved as we are in the situations in which they’re caught up. The final moments of ’71 end the film on a cynical note, with the official ass-covering having officially begun. But if the kind of cynicism toward authority figures it suggests is hardly anything new in political thrillers of this stripe, the path toward this bitter conclusion has been chronicled with such a clear-eyed sense of perspective that, against all odds, it nevertheless lands with the necessary gut punch.

Review: Hector and the Search for Happiness