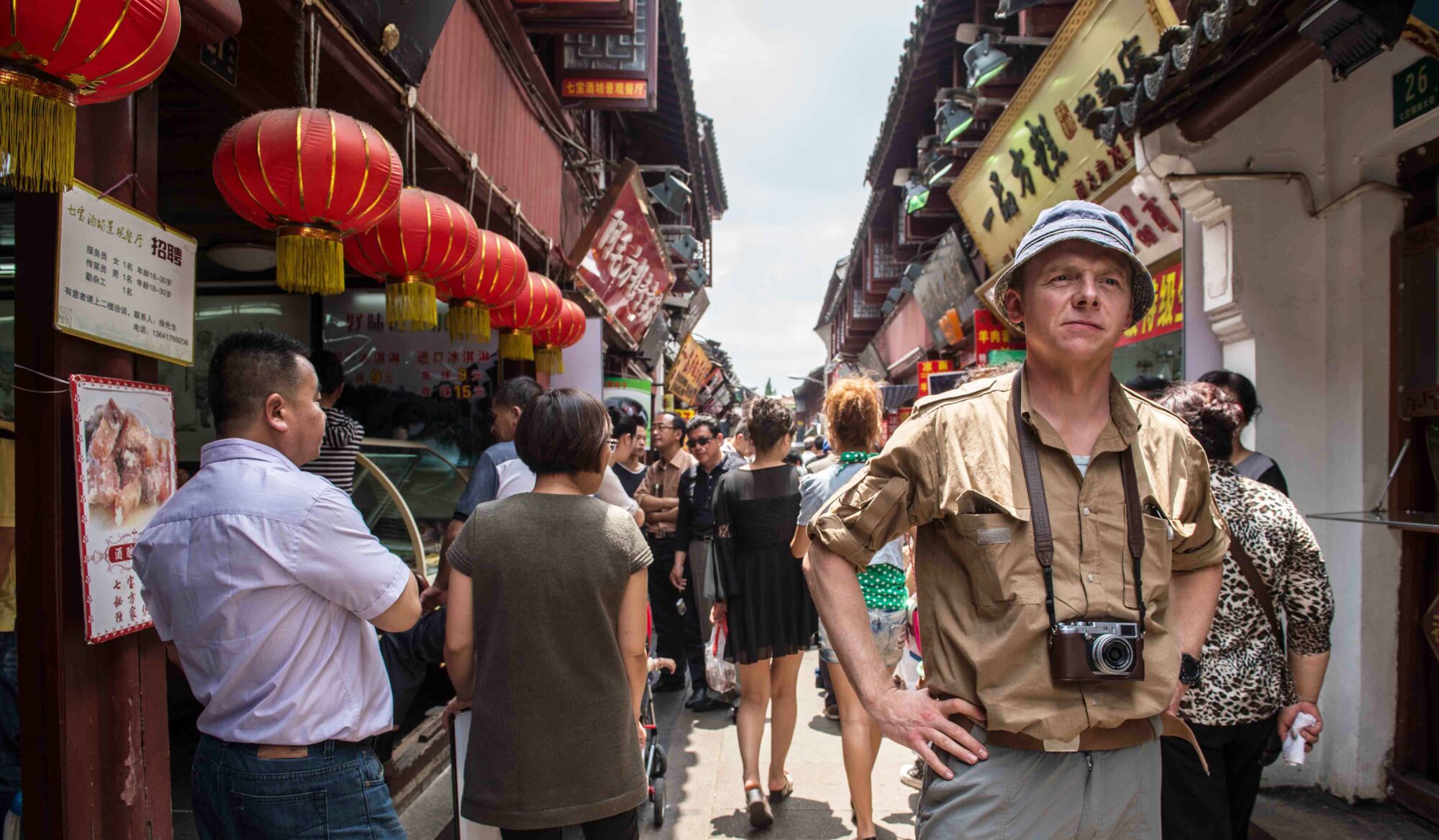 Starring Simon Pegg as a disenchanted London shrink, Peter Chelsom’s Hector and the Search for Happiness clings desperately to a vague surrounding promise of spiritual replenishment, culminating in a weepy climax that verifies its status as a proud hunk of propaganda from America’s massive self-help industry. Pegg’s Hector embarks on an open-ended—and, from the looks of it, crazy-expensive—globetrotting sojourn, propelled by the meagerest of bourgeois discontents imaginable: He’s lost the ability to empathize with his patients, which means they no longer offer him any intellectual challenges or surprises. (At one point he bellows to a patient who fudged her vacation dates to “fucking own it!”) Hector’s character is assumed to stand in for anybody who’s ever asked themselves if there could be more to life, but he comes off as more of a flailing, insensitive maniac. He’s subject to wildly inconsistent shifts of personality, but Pegg manages to inhabit them sufficiently, distractingly well: There’s Hector the glazed-over doctor, Hector the bumbling moron in zippered travel wear, and Hector the inquisitive, Moleskine-wielding foreigner.

Hector’s girlfriend, Clara (Rosamund Pike), hangs back in London while he begins his travels in China, where a multimillionaire (Stellan Skarsgård) shows him the deluxe edition of Shanghai, booking him a suite at a swanky hotel and introducing him to a beautiful young student (Ming Zhao). Before Hector works up the nerve to have sex with her, the pair strikes up a liberating mini-relationship—until her pimp rolls up on a Kawasaki the next day looking to get paid, extinguishing the romance and taking her with him. The fable-like quality of Hector’s encounters (with the resultant lessons jotted down in his notepad as “rules” of happiness, such as “sometimes happiness is not knowing the whole story”) give his botched romance the feeling of sacrificial fodder, as if it’s somehow fair for a white man to endanger a sex worker’s life because he’s on a path to personal enlightenment.

Exoticist clichés rain down like blows to the head as Hector continues on to a country in Africa (no name given, naturally), stepping off a rickety jet into a painful compendium of the continent’s most embarrassingly tone-deaf stereotypes. Other-izing himself is part of Hector’s treatment strategy, but when he’s kidnapped by armed mercenaries, only his association with a drug kingpin, Diego (Jean Reno), saves his life and helps him put things into perspective, making him somehow realize what a frightened, quavering little boy he’s heretofore been on the inside. (After Hector provides Diego some free psychiatric advice, the criminal makes an anonymous donation to Hector’s friend’s clinic, flushing the nonprofit world with dirty money—another consideration Hector and the movie both manage to breeze by.) For a film with this many cultural insensitivity issues, Chelsom’s choice to show Hector constantly comparing himself to Tintin is another symptom of terminal tone-deafness.

Finally, he flies to Los Angeles to reconnect with his old flame, Agnes (Toni Collette), but not before holding a warm washcloth to a dying woman’s forehead on the flight over, and after touchdown, she gives him another one of his lessons (“Listening is loving, Hector!”) before being carted off to her doom. Maybe the problem with Hector and the Search for Happiness is the search’s foregone conclusion: It’s as though Hector knew these tropes were out there, but had merely to go out and experience them one at a time to confirm them for himself. The supporting players—among them Christopher Plummer as a hippy-dippy neuro-analyst thinkfluencer—all do what they can with the material, and the actual advice the movie offers (essentially: “stop being a repressed crybaby all the time”) may well be accurate. But waiting for Hector’s inevitably sob-story breakthrough is as exhausting as the twee bric-a-brac of his well-registered existential complaints. All the more interesting characters have served their purpose; in the end, all you’re left with is Simon Pegg, mugging.

Review: Pasolini Is the Rare Biopic That Stresses Creation Above Chaos