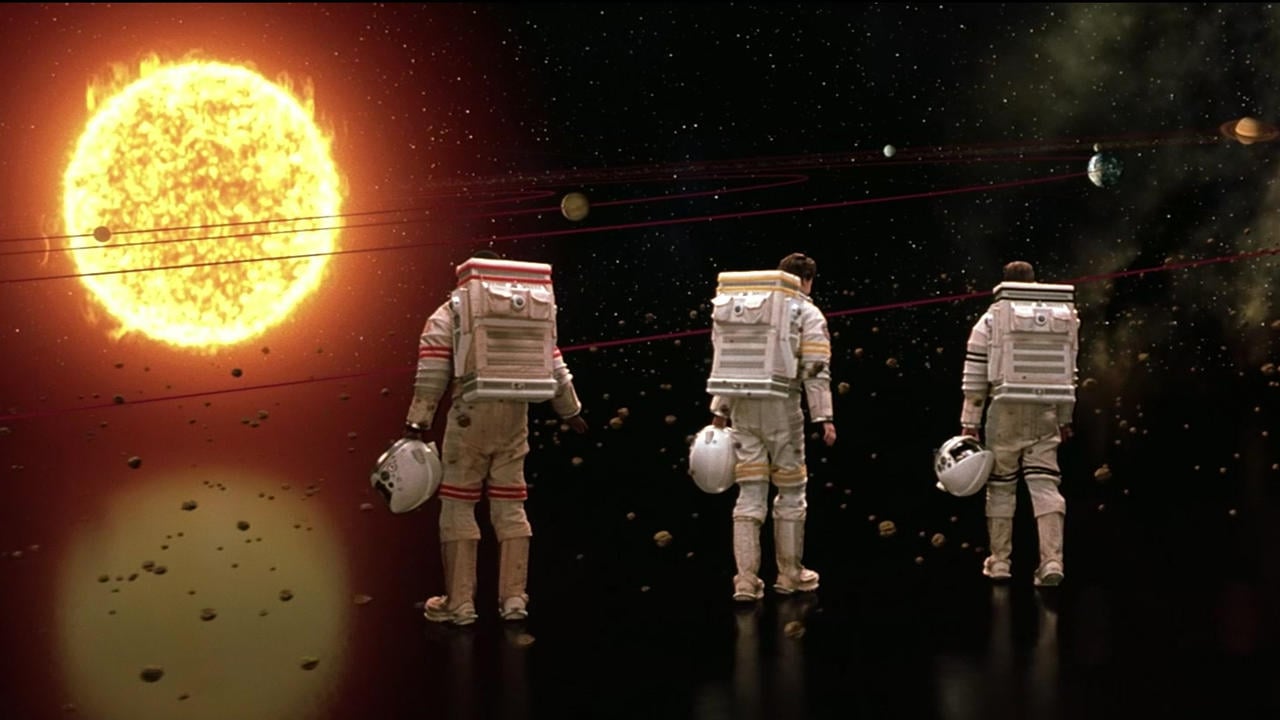 The House Next Door’s 02/18/06 interview with former Salon critic Charles Taylor inspired some of the most heated reactions of any article yet published here. A number of comments centered on Taylor’s defense of Brian De Palma’s Mission to Mars, a sci-fi epic that has proved surprisingly divisive for such a gentle movie. To build on that discussion, I’ve culled a representative selection of reviews, arranged in a spectrum from pans to raves.

Andrew O’Hehir, Salon: “I’m something of an agnostic when it comes to De Palma, but he’s unquestionably a director of consummate style and skill, one whose most popular films—from Carrie to Scarface to The Untouchables—have become tremendously influential in contemporary cinema. Sometimes his cannily constructed thrillers (like Dressed to Kill or Blow Out) have struck me as soulless, even sadistic, technical exercises, slavishly devoted to the gospel of Alfred Hitchcock. But one thing De Palma has never been, until now, is a crashing bore.”

Wesley Morris, The San Francisco Examiner: “The film is filled with people so pulseless that when David Lee Roth-era Van Halen comes on in the form of ‘Dance the Night Away,’ they do gravity-less ballet. It’s an experience as frustrating as watching Jeff Gordon drive a stock car through a bowl of oatmeal. But that’s our crew, folks: a band of pansies who’ve chosen the lamest tune in the Van Halen catalogue to party.”

Elvis Mitchell, The New York Times: “He has been accused of being inexpressive, but his problem here is that he is too enraptured by his subject. There’s a follow-your-bliss dreaminess here that wouldn’t be out of place at a Deepak Chopra seminar or on a Mannheim Steamroller album.”

Roger Ebert, The Chicago Sun-Times: “The three key sequences are very well done. They are surrounded by sequences that are not—left adrift in lackluster dialogue and broad, easy character strokes. Why does the film amble so casually between its high points? Why is a meditative tone evoked when we have been given only perfunctory inspiration for it? Why is a crisis like the breached hull treated so deliberately, as if the characters are trying to slow down their actions to use up all the available time? And why, oh why, in a film where the special effects are sometimes awesome, are we given an alien being who looks like a refugee from a video game?”

David Edelstein, Slate: “The prospect of De Palma—the spatial-temporal wizard of modern suspense—on Mars made me feel like a 6-year-old waiting for the latest chapter of Flash Gordon. But Mission to Mars isn’t popcorn sci-fi. It’s square, stately, technobabble sci-fi with religioso undertones, and the closer it gets to its climactic revelation, the cornier and more Spielbergian it gets.”

Margaret A. McGurk, The Cincinnati Enquirer: “Things go wrong with the rescue as well, requiring some clever problem-solving that provides the movie’s most suspenseful moments and seamless special effects…Unfortunately, the filmmakers’ imagination flags in the closing sequences; the movie’s final reel looks like a high-tech museum exhibit entitled ’2001: A Space Odyssey for Dummies.’”

Matt Zoller Seitz, New York Press: “I’m not claiming Mission to Mars is a masterpiece. Parts of it are just plain bad.…Still, seeing this movie clarified De Palma’s artistry for me, in ways I never could have anticipated…His films are dioramas, train sets, marionette shows, ant farms. This director likes his characters flat and abstract, but when the story and themes awaken his visual genius and sense of play, they come alive anyway. The limited characters in this film bloom because the story has made De Palma come alive. He’s in love with gadgets, in love with filmmaking and in love with love; when he looked at the rough cut, I bet even he was surprised by his own capacity for feeling.”

Ray Sawhill, Salon: “The film begins with a visual joke—a rocket blastoff that turns out to be a toy rocket. By the final blastoff, real lives are at stake. De Palma is talking about the way we seem to be moving from an industrial culture that demands certitude and explanation to an information culture, where everything is a matter of probability and we try to comprehend the world by making models of it. Kubrick, our only other truly intellectual feature-filmmaker, got the respect for his brains (even for Eyes Wide Shut!) that De Palma has never gotten—perhaps because the later Kubrick always maintained a magisterial, Euro-serious manner. De Palma is more American and boyish; he at least tries to deliver the pop goods.”

Giuseppe Puccio, Brian De Palma’s Split World: “A work of great purity and beauty, rigorous and touching. Even if some of the usual features of De Palma’s cinema here are lacking, or anyway are greatly transformed, it is not difficult to recognize this movie as a very personal and sincere one, a film which, beyond any intellectual judgment or aesthetic admiration, deserves first of all to be loved.”

Charles Taylor, Salon: “Concerned with the wonders and limits of technology, and how we can use it without sacrificing our humanity, De Palma is addressing one of the key concerns of filmmaking, especially in an era when special effects threaten to supplant humanity in our movies.”

Armond White, New York Press: “’Amused contempt,’ is the way Salon magazine praised the critical attack on Mission to Mars. It’s a point of view that disdains emotionalism and beauty in cinema, aloof from art but reveling in smug superiority to any humane feeling that a filmmaker might express. Critics lining up to bitch-slap De Palma is the real bonfire of the vanities, a culmination of the pulp-trash culture that began by catering to adolescent cynicism, young adult hipsterism. Behind this is the dullest literal-mindedness. The issues-vs.-artistry complaint that Andrew Sarris outlined more than 30 years ago still threatens to keep movies a low medium, denying their esthetic (visual, kinetic, emotional) essence.”