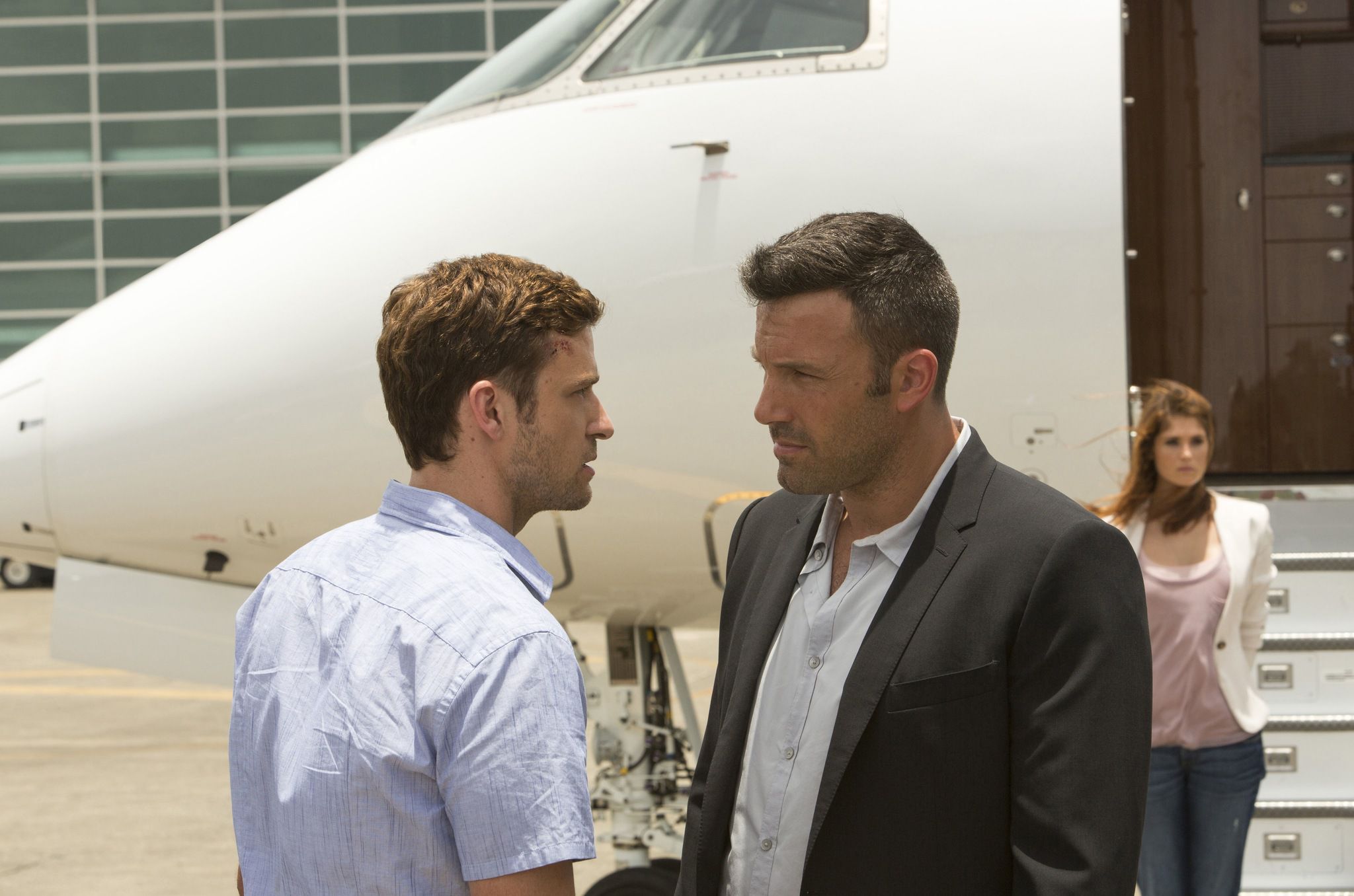 There’s a scene in Runner Runner in which gambling guru Richie Furst (Justin Timberlake) attends a debauched, carnivalesque party, with women in skimpy outfits prancing in the glow of happy rainbow lights, and a DJ wearing a massive helmet that’s part billiard ball, part Mickey Mouse. It’s like Timberlake is back at the VMAs, only this time, he’s trapped in Miley Cyrus’s performance. And like Cyrus’s hot-button work, this mediocre thriller comes with ample brouhaha that seems in service of little more than a cheap slice of derivative hedonism.

Richie, who was apparently screwed out of a gig on Wall Street, is introduced at Princeton University, where he can barely afford his pursuit of a master’s degree in finance, and gains extra cash by serving as the middle man between spend-happy students and a gambling website (a few professors are in on the action too). The subsequent opening-credits sequence acts as a crash course in the world of online gambling, and it’s the first of many barely absorbable barrages of data. Like the poor man’s version of a breathless, Tony Gilroy button-pusher, Runner Runner talks a big game, but has no original hand to play.

Directed by Brad Furman, who excelled with the gritty, Grisham-esque The Lincoln Lawyer, the film can’t amend with frantic speech what it lacks in imagination. Runner Runner doesn’t just typecast its stars, it practically lifts their on-screen personae from previous movies. When Richie is warned by Princeton’s dean that he either kicks the gambling business or gets kicked off campus, the number-cruncher proceeds to bet his bank account while hitting a gambling site himself, and the character becomes a hybrid of The Social Network’s Sean Parker and Mark Zuckerberg, complete with a posse of students piling beer bottles around his monitor while he types and clicks away. Meanwhile, Ben Affleck, who plays Ivan Block, a wanted man and owner of the website that apparently cheated Richie out of his tuition, is practically tasked to recreate his douchey swindler from Boiler Room, already a riff on Alec Baldwin’s Blake from Glengarry Glen Ross. Going to great lengths to reach, as a side player puts it, web gambling’s “Wizard of Fucking Oz,” Richie hops on a jet to Ivan’s home base of Costa Rica, and after finagling a face-to-face meeting, gets caught up in Ivan’s world of naughty excess.

Furthermore, while it’s marginally smarter and features less affected performances, Runner Runner often recalls the twisty mess of Swordfish, a film no other should even loosely aim to emulate. Timberlake essentially takes Hugh Jackman’s role as the seduced inside man, Affleck plays a dialed-down version of John Travolta’s loquacious sociopath, Gemma Arterton slips into the heels of Halle Berry’s enigmatic right-hand gal, and Anthony Mackie adopts the Don Cheadle part as an F.B.I. agent, who’s looking to use Richie to finally take Ivan down. Continuing to prove himself a competent but occasionally awkward dramatic actor, Timberlake, specifically, drains urgency from the film. He may convincingly straddle the line between geek and hunk (Richie, of course, winds up bedding Arterton’s Rebecca), but, in squeaky voiceover especially, he seems too boyishly earnest, giving the sense that Poindexter is carrying viewers through this story. It’s as oddly goofy as Runner Runner’s apparent vendetta against New Jersey, the butt of a remarkable number of out-of-leftfield jokes.

Whatever economic commentary the movie may be trying to offer is wildly obscured by its unfettered indulgences, from the Gatsby-style glitz of Ivan’s tropical parties to the bloated lingo of which the film seems especially proud. Beyond Richie’s impossible-to-follow, nonstop stream of stats and percentages, Runner Runner, penned by Ocean’s Thirteen co-screenwriters Brian Koppelman and David Levien, revels in the pompous practice of echoing choice lines, such as one about fear versus conscience, and another about every risk-taker being a gambler. The latter is particularly and unfortunately ironic, as the ultimately forgettable Runner Runner is, for a gambling film, markedly risk-averse.