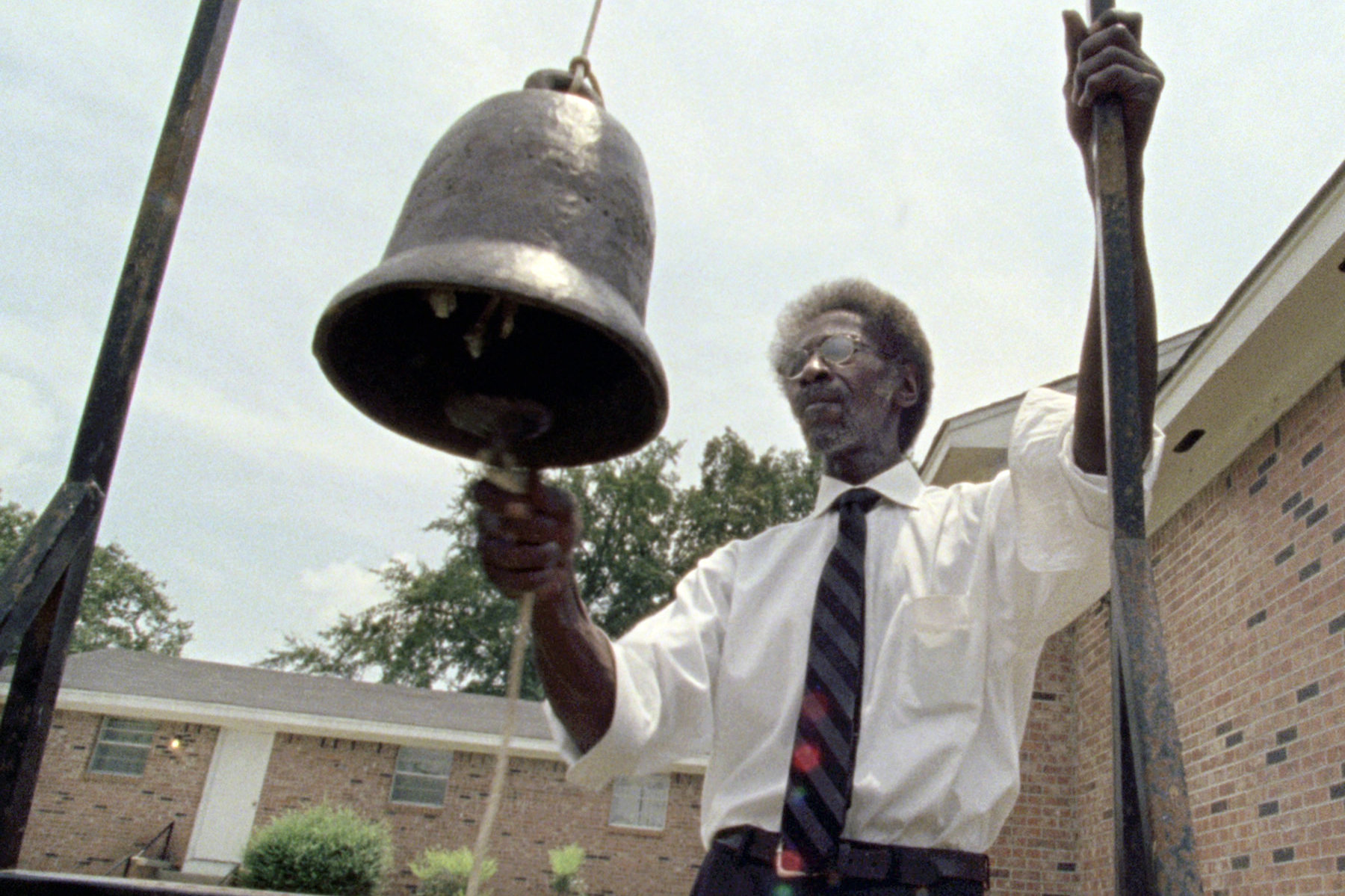 Kevin Jerome Everson introduced the world premiere of his 10th film, The Island of St. Matthews, at Rotterdam by saying that it’s like the others, but different: a familiar subject matter (“black folks in America,” as he put it) approached with a unique method. Indeed, his latest feature, shot on 16mm, is an unusual blend of documentary and avant-garde modes that broaches the historical, the theological, the economic, and the personal. A series of staged actualités sets the film into motion: a man walks along the top of a dam wall; another water skis along the Tombigbee River that runs alongside the Everson family’s town of Westport, Mississippi; others, draped in anachronistic white robes, perform a baptism; another tolls the bell of St. Matthews Church. Everson’s poetic sound design makes these disparate scenes, like postcards from a bygone era, glide into one another and, later, function as a sort of chorus in between verses of talking heads.

Interspersed with the Westport residents’ recollections of the major flood in 1973 and the smaller ones that followed almost yearly are various meditations on the drastic preventative measures that the flooding has necessitated. Far from a bitter indictment of the government, though, the film recognizes the legislation that insures up to $250,000 of damage to houses and celebrates the erection of the dam. Everson gives key supporting roles to the civil servants that monitor the water levels around the facility. He also lavishes the dam walls with screen time, occasionally gazing at them for the length of a magazine, recalling James Benning’s 13 Lakes in contemplation of the glimmering water.

As fundamental to The Island of St. Matthews as the landscape may be, the faces reign supreme (the film’s title describes how Westport feels now that the dams have cut off the locals’ direct access to neighboring towns). Everson largely decided to make a film about the 1973 flood when he learned that it destroyed his family’s photographs. With The Island of St. Matthews, he’s not only probed the contours of this natural disaster, but he’s also culled together a whole new album. Everson’s aunt appears on many of its pages, depicted amid her job teaching at the Harris School of Cosmetology. Hook, who recounts his memories of the floods from his porch, is another star. Capped with an Obama hat, he revels in being alive, despite losing his right hand and being diagnosed with Parkinson’s disease. “Most of my classmates are gone on or dead,” he says, “I’m just proud to be here.” An even more perfect synecdoche of Westport’s pride derived from its survival is the water skier riding along the Tombigbee. Like Westport, the water knocks him down at first, but each time we subsequently see him, he withstands the turbulence of the wake and stays standing, smiling, on his own two feet.

Fresh from its world premiere at Sundance, It Felt Like Love explores another American waterfront enclave close to the filmmaker’s roots. Eliza Hittman’s first feature is a coming-of-age tale set in Gerritsen Beach and adjacent working-class neighborhoods in southern Brooklyn that, in the rare instances in which they appear on screen, usually double for New England waterfronts (see The Departed). Lila (Gina Piersanti), a scrawny, confused 14-year-old, spends the summer by the water, playing third wheel to her precocious best friend, Chiara (Giovanna Salimeni), and her boyfriend, Patrick (Jesse Cordasco). Lila’s widowed father, jaded yet sensitive, assures her that, as much as it may seem like it, they’re not really in love. Anxious for her own sex life to begin, Lila starts to trail the first guy that crosses her path, initiating herself into an older Guido-fab world dominated by blunts, forties, and promiscuity.

The familiar subject matter is enlivened by a distinct visual style centered upon close-ups and soft focus. Cinematographer Sean Porter captures young female faces with the same grace, poignancy, and grayish palette that he brought to Megan Griffiths’s Eden, bolstering Piersanti’s impressively assured performance and Hittman’s architecture of a community in which Lila doesn’t quite belong. The summer setting guards her (and the audience) from the embarrassment of social hierarchies in high school, but her insecurities emerge in any remotely sexual situation. Hittman meticulously traces the edges of comfort, focusing on details like Lila and Chiara holding hands as they walk, or Lila’s younger male neighbor squirming as she stretches her legs alongside his while they watch TV.

Despite her obvious unease about boys, Lila naïvely attempts to impress those around her by bragging about bogus sexual exploits. The consequences range from darkly humorous situations to ephemeral moments of panic. As close as It Felt Like Love occasionally hues to the shock value that Larry Clark’s teen films have veiled in an aura of underground authenticity, it shares more with Trust and other early films of Hal Hartley, an acknowledged influence. Like Hartley’s, Hittman’s characters flaunt their blemishes and self-doubts, and they talk like real Brooklynites.

Hittman’s unabashedly noncommercial spirit and attunement to the texture of blue-collar New York life would be reason enough to kvell about her debut feature. It’s also has non-traditional good looks. Take, for instance, the close-up of Lila, lacquered in sunscreen and facing the camera with the ocean behind her like an adolescent Giulietta Masina, which rhymes with the closing shot of her behind a white mask, leaping through a baroque dance in sync with her ensemble. Lila may never master the hip-hop dancing that gives Chiara and others their sex appeal, but she’s already showing improvement at integrating herself with her peers.

Review: Bullet to the Head