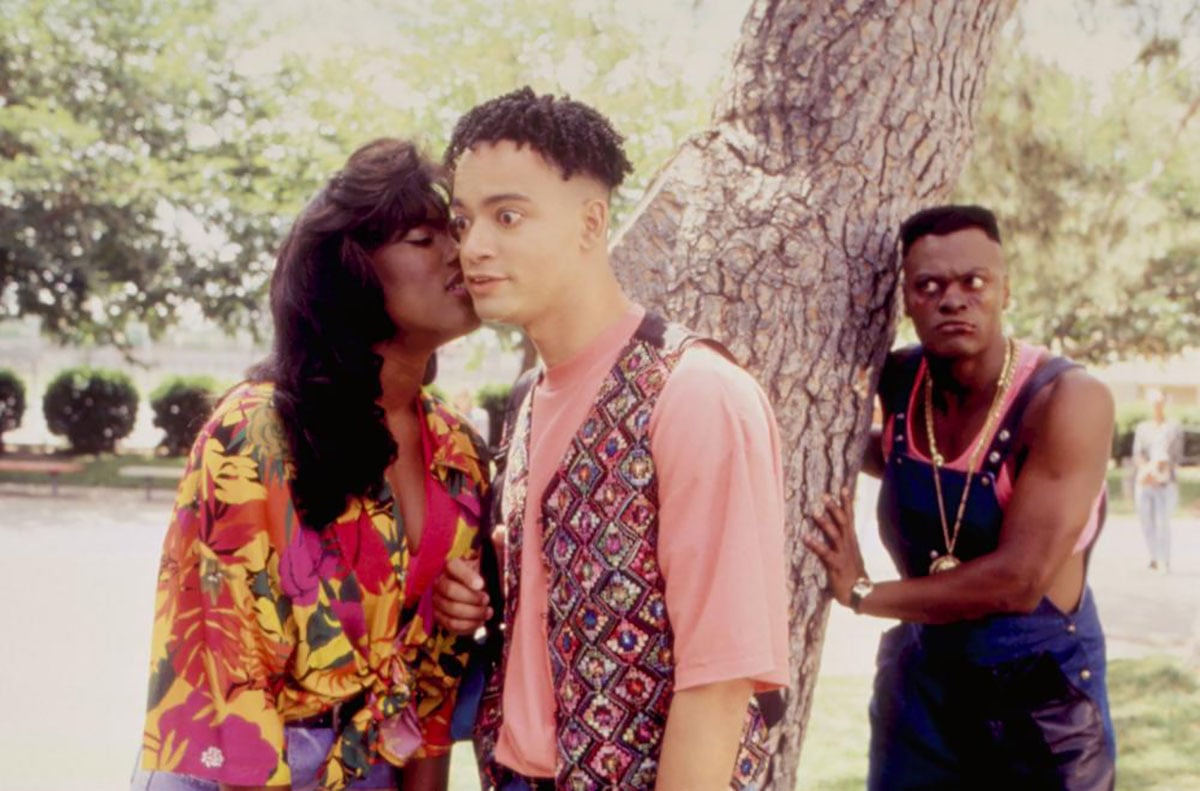 Randall Miller’s Class Act is the third film, following 1990’s House Party and 1991’s House Party 2, to star the charismatic rap duo Kid ‘n Play, whose unique look, bouncy rhymes, and famous dance moves made them prime candidates for cinematic success. Christopher “Play” Martin has a slippery, lady-killing charm that he easily maximizes with a simple glance at the camera. And his sidekick, Christopher “Kid” Reid, is a limber physical comedian whose impressive, eight-inch-high top fade sits atop a rubbery face tailor-made for the silent comedies of Hal Roach. Critic Jim Emerson called them a “hip-hop Laurel and Hardy,” but their films more often brought to mind a fantasy matchup between a less hyper Jerry Lewis and an even cooler Dean Martin.

Class Act swaps Kid and Play’s well-defined personae, at least on paper. Because of some titty-related slapstick, the high school files of Play’s juvenile delinquent, Blade, are swapped with Kid’s A-student nerd, Duncan. This forces them to impersonate one another for a variety of rather lame reasons. Blade’s parole requires that he stay out of trouble and pass his classes, while Duncan’s college scholarship is threatened because he’s failing gym class. Blade needs Duncan’s brain, and Duncan needs Blade’s physical acuity.

Additionally, Blade wants to keep his rep as the toughest brother since Jim Brown, so he forces Duncan out of his nerdy comfort zone and into more thuggish roleplay. Whenever it looks like Duncan’s written a check that his ass can’t cash, Blade swoops down to secretly beat the crap out of people. In return, Duncan helps Blade study for his advanced classes. Both guys hook up with women who’re turned on by the other guy’s personality type. The Fresh Prince of Bel Air’s Karyn Parsons plays Ellen, Play’s love interest, and Alysia Rogers is very good as Damita, Duncan’s sweetheart.

There’s even time for a cool Kid ‘n Play rap number, which puts a visual representation on Class Act’s strongest asset: soundtrack-derived nostalgia. The onslaught of familiar new jack swing hits from the early 1990s is overwhelming enough to make you drag out old posters of Jodeci and Teddy Riley. Which is to say, you may as well save time and just listen to the soundtrack, because while Kid ‘n Play’s shared chemistry remains as strong as it was in House Party, not enough is done to capitalize on the plot’s familiar, mistaken-identity trope. This is a film that never commits to an ultra-smooth Kid or a pratfall-prone Play. The best it can do is swap their hairstyles, but even then, only Kid commits to the gleeful insanity of Play’s braids. Play’s take on Kid’s fade, by comparison, is disappointingly low-key.

Get past such missed opportunities and you may notice the intriguing cultural business going on in the film’s casting department. In this predominantly black film, all the smart, privileged kids and do-gooders are light-skinned, and all the troublemakers and poorer kids aren’t. This “paper bag test” is blatant enough to draw attention, but there’s a weird disconnect at play here, because though we’re aware of this stereotyping, the plot certainly isn’t. Had the characters in this film been on the same wavelength as its casting director, the school administrator wouldn’t believe that Duncan is Blade and vice versa. So it feels like the film is subverting its own optics. But is this really intentional or is this cinema’s first instance of “accidental wokeness”?

The waters of race-based intentions muddy even further when, for some unexplained reason, Pauly Shore shows up as his annoying Weasel character from MTV. The film reacts to him the same way the black audience I saw this film with did back in 1992: Who the hell is this idiot white dude, and why is he here? You can almost see the celluloid on which Class Act was printed recoiling with confusion and horror. Did Warner Bros. impose on the filmmakers the mandate that this film needed to capture white teenaged viewers, and if so, was Shore’s casting the filmmakers’ snarky response?

Bear in mind that these questions aren’t ones that arose from my recent viewing of Class Act. I was once again reminded that this film would make a good double bill with the similar (and superior) 1991 film Strictly Business. Like Class Act, that Halle Berry-Tommy Davidson starrer consciously perpetrates the tired assertion that to be truly black, one must be (to paraphrase Donny and Marie Osmond) “a little bit bougie and a little bit thug asshole.” But Strictly Business bypasses the identity swap for a personality transplant between the bougie dude and his streetwise pal so that the former can snag the girl of his dreams. While both male characters are of a similar hue, the lady is far lighter than either of them. While I still wonder about Class Act’s casting decisions, I’m sure the folks who made Strictly Business knew exactly what they wanted to say about theirs.