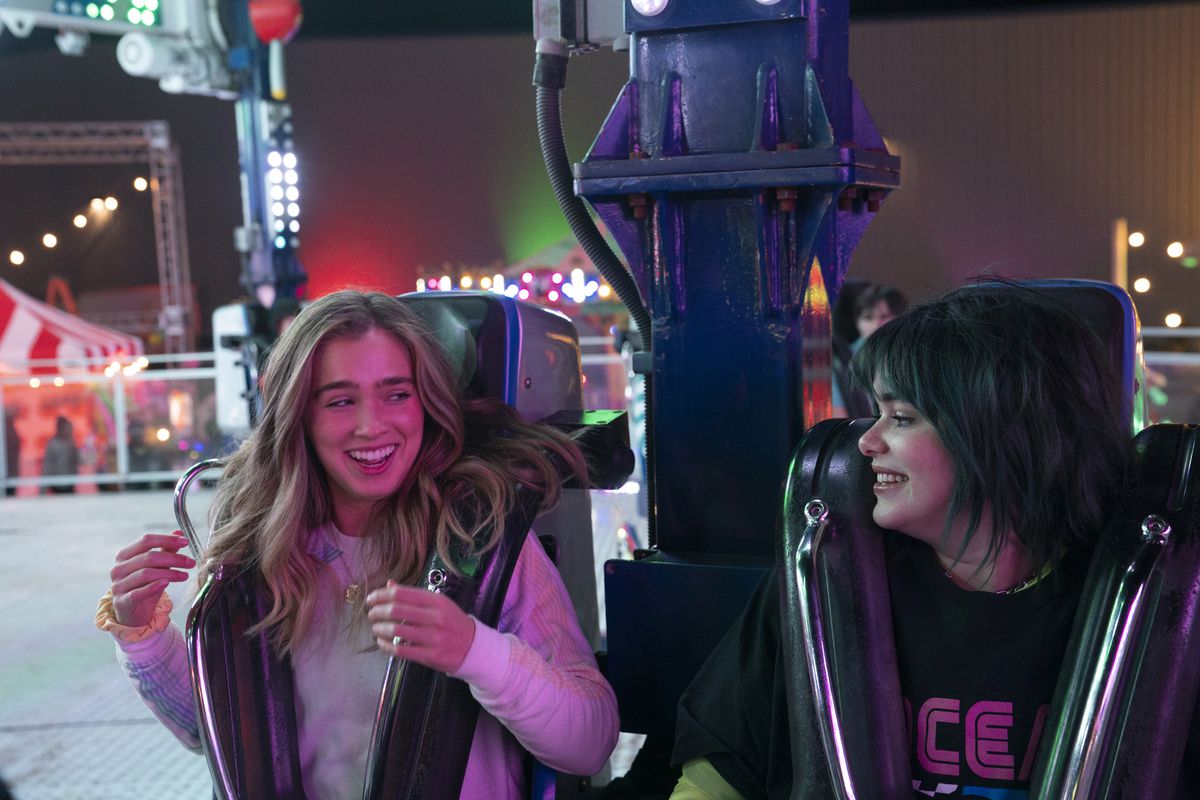 The heroine of Rachel Lee Goldenberg’s Unpregnant is introduced while sitting on a toilet, a pregnancy test in her hand. This opening suggests that the film might be as unsanitized a treatment of teen pregnancy and America’s abortion wars as Eliza Hittman’s Never Rarely Sometimes Always. Both films are about 17-year-olds who leave home to seek an abortion in a state where parental consent isn’t required, but the crucial difference between them isn’t that Veronica (Haley Lu Richardson) has to cover a lot more distance than Sidney Flanigan’s Autumn in Hittman’s critical hit. It’s that Unpregnant is far sunnier and mostly comic, even though at its most invigorating it allows itself to get angry.

Where Autumn in Never Rarely Sometimes Always has to get from Pennsylvania to New York City, Veronica must travel from Missouri—which has some of the country’s most restrictive abortion laws—to Albuquerque. Obsessively organized and reasonably affluent, the teen thinks she can accomplish her goal and return before her mother (Mary McCormack) realizes she’s not actually at a friend’s house for a cram session. And because Unpregnant is a road movie, that means that Veronica must have a travel buddy. The odder the couple, the bigger the laughs, so the tidy Veronica is paired with the messy Bailey (Barbie Ferreira), the high school outcast. The two used to be best friends before divorce, puberty, and college plans intervened. The matchup allows for 900 miles’ worth of reminiscences, recriminations, and rebonding.

Unpregnant’s first half follows conventions of the road movie so faithfully that viewers might well expect the young women’s departure in their muscle car to be fueled by Steppenwolf’s “Born to Be Wild.” As they charge forward, they turn their backs on Veronica’s useless boyfriend (Alex MacNicoll) and a schoolhouse-rocking gossip frenzy about whose positive-pregnancy test was found in a dumpster. Soon they’re rediscovering their pre-teen private jokes and junk-food affinities. Naturally, the uptight, Ivy-League-bound Veronica also learns, of course, to loosen up. Portraying a more conventionally appealing adolescent than she did in The Edge of Seventeen, Richardson is every bit as likable as Unpregnant requires. Ferreira has more fun with Bailey, whose backstory is as difficult as her emotions.

The young women’s liberation ends when they’re sidetracked by a seemingly helpful couple (Breckin Meyer and Sugar Lyn Beard) who turn out to be anti-abortion kidnappers. Goldenberg switches to horror-film tropes before invoking Thelma and Louise, flirting with slapstick, and then allowing Veronica to deliver a public service announcement: “Fuck you, Missouri state legislature!” There’s a Taser incident and a knife-wielding survivalist (a humorously ominous Giancarlo Esposito) who drives a stretch limo—a nutty idea whose payoff is a prom joke that demonstrates how little distance Unpregnant manages to put between itself and a standard high-school comedy. Goldenberg, who directed the 2020 musical update of 1983’s Valley Girl, is no cinematic Thelma or Louise, prepared to drive her vehicle over the edge. Instead, she guides the film toward a sentimental coda. But Unpregnant at least neatly mirrors Veronica’s persona: meticulous and conventional, but occasionally freed by flashes of rage.

Review: Notturno Is a Powerfully Experiential Look at a Land Riven by War