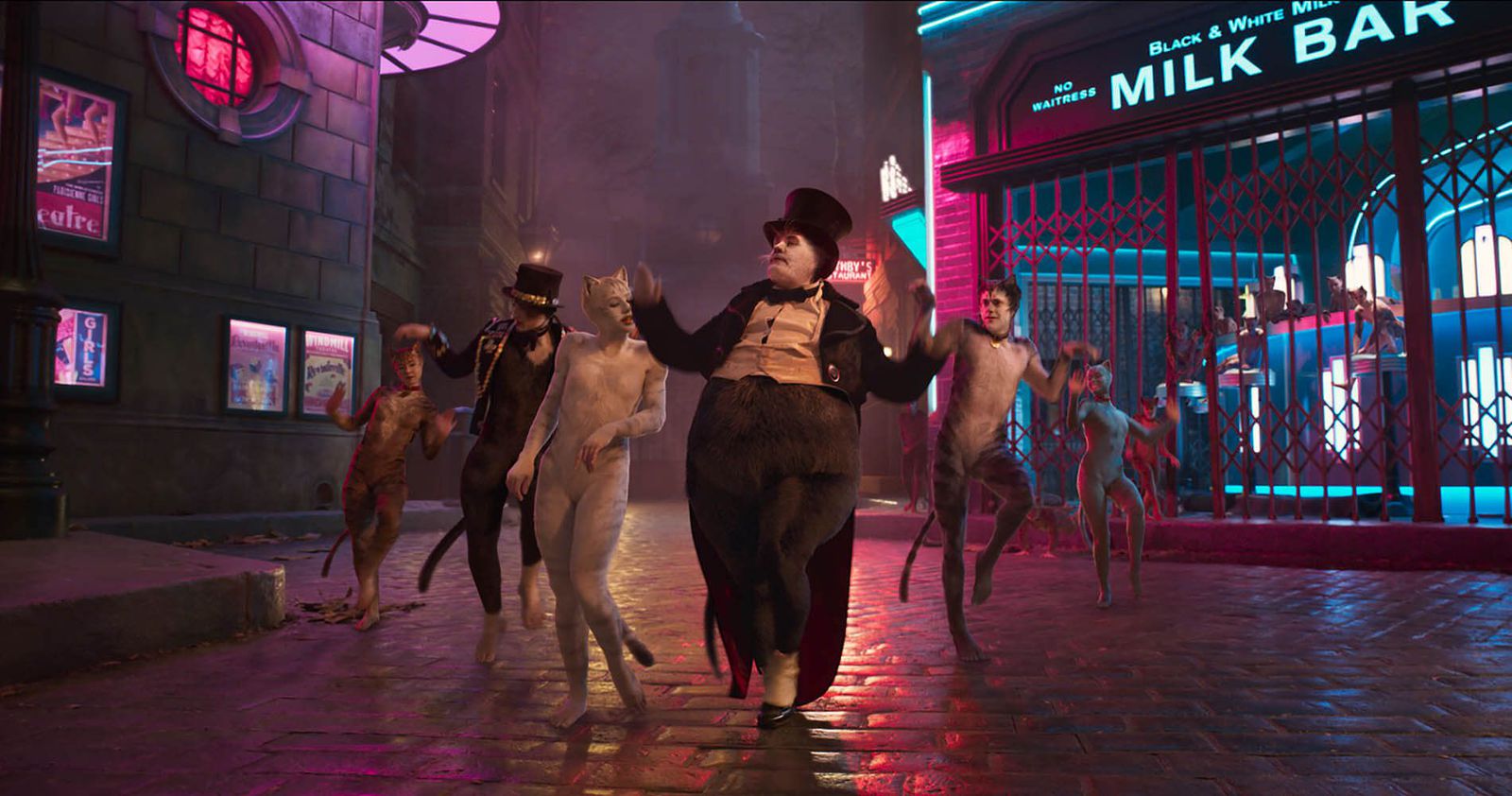 One of the most dire cultural artifacts of the 1980s, Cats remains perhaps the most baffling musical to ever enjoy blockbuster success. Compensating for its profound narrative deficiencies with the sheer technical innovation of its moving stage and a latticework of catwalks that achieved an intense degree of intimacy between the performers and the audience, Andrew Lloyd Webber’s musical is a triumph of excess over substance. And Tom Hooper, who previously adapted another musical famed for its dynamic stage design, Les Misérables, to the big screen, is at the helm here, reliably whipping up the same busy, arrhythmic energy that ultimately sank his take on Claude-Michel Schönberg’s epic.

This adaptation gets straight to the heart of the material, which is basically two hours of stray cats introducing themselves. The film sprints out of the gate with Victoria (Francesca Hayward) being dumped on a London street by her owner, at which point the frightened kitty is accosted by various strays, who proceed to explain their nature as Jellicle cats. (T.S. Elliot originated the term Jellicle, and it was his poetry collection Old Possum’s Book of Practical Cats that inspired the musical.) In an exasperating portent of things to come, the cats describe in great detail all of the things they do without truly getting at how a Jellicle differs from any other breed of cat. This sets the template for the rest of the film, in which various cats sing entire solo songs dedicated to letting the other characters and the audience know who they are, yet never once build or develop an actual character outside of some basic traits.

This, of course, is a defect of Webber’s musical, but everything in the film is run at such a dizzying clip that it’s as if the original Broadway cast recording were being played at 1.5x speed and the visuals were paced to match. The chaotic rush only exacerbates the tonal whiplash that was always a part of the musical’s peculiar song sequencing. The filmmakers eliminate what little breathing room existed between the songs, which only makes it more discombobulating to go from the lascivious funk stomp that introduces the Rum Tum Tugger (Jason Derulo) to the morose torch song that Grizabella (Jennifer Hudson) performs during her first appearance and finally into the Sgt. Pepper’s-esque psych vaudeville that heralds the arrival of that gluttonous raconteur of a cat, Bustopher Jones (James Corden).

Hooper handles these dramatic mood swings the only way he knows how: by wielding a camera that never stops moving, never holding a shot long enough to take in a full action. As ever, the filmmaker blends violently shaking handheld shots and nominally stable compositions that are nonetheless wildly off-center and constantly spiraling. Set in London during the wee hours, Cats is shrouded in darkness and fog that fails to obscure the flat, plastic textures of the buildings and interiors that loom over the characters. And the waxy sheen of the backgrounds is exacerbated by the ugly, muted color palettes of grays and browns that are offset by the occasional splotch of red or purple that smudges the frame like a birthmark. It also doesn’t help that, for a musical, the film’s sound mixing is erratic, with sudden spikes and lulls in volume that contrast sharply with the actual tenor of a given song.

Eventually, the film arrives at its motivating drama, the question of which of the street cats shall be selected by the sagely Old Deuteronomy (Judi Dench) to be the “Jellicle choice” to ascend to the Heaviside Layer to be reborn. To be chosen for this prized reincarnation, cats must audition by, you guessed it, singing about who they are and what makes them special, capping off an hour of cats singing about who they are with a second hour of other cats doing the same. Because the film manages to make even Webber’s musical seem considered and precisely ordered by comparison, these scenes have no impact, and it’s difficult to be impressed by any of Old Deuteronomy’s would-be reincarnates. Not even the showstopping “Memory” has any soul, despite Hudson’s spirited rendition as the fallen, downtrodden Grizabella, thanks to the clumsy manner in which Hooper rushes through every moment.