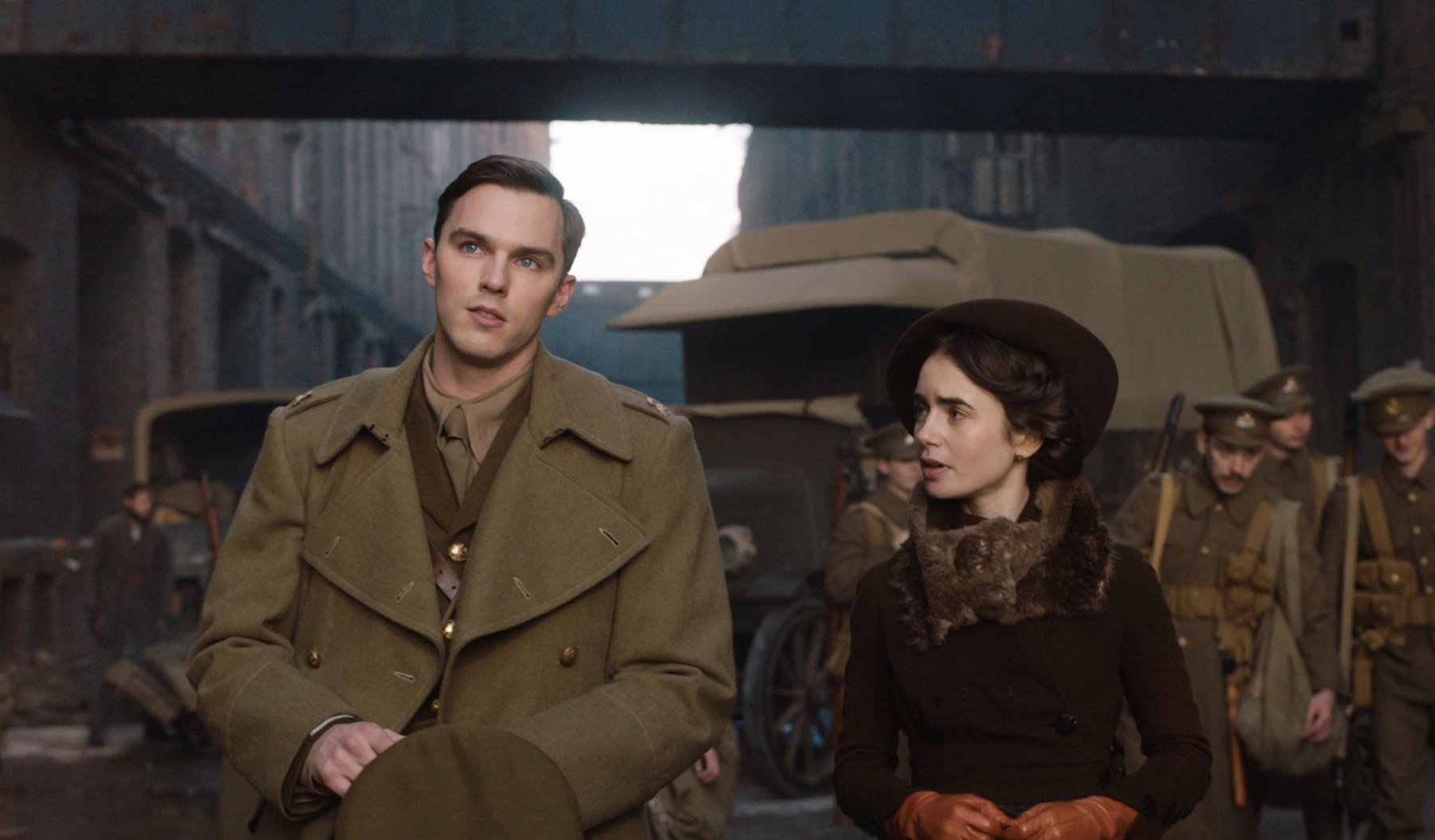 In his youth, J.R.R. Tolkien’s interest in linguistics and philology led him to invent various languages, influenced by Greek and Old English, and to develop a strong fondness for random words (like “cellar door”) that together made unexpectedly beautiful sounds. This unique approach to language, along with a fascination with mythical stories, played a critical role in lending both of Tolkien’s earliest, most legendary works, The Hobbit and The Lord of the Rings, a vividness that continues to grip readers to this day. Would that even a smidge of the famed author’s ability to enliven familiar narrative frameworks with inimitable personal flourishes had rubbed off on Dome Karukoski’s woefully paint-by-numbers Tolkien.

Like Goodbye Christopher Robin and Saving Mr. Banks before it, the film spins yet another uninspired yarn about a visionary author, resting its laurels on the unquestionable talents of its subject while treating the artistic process in the most frustratingly reductive of ways. Tolkien, in fact, seems downright immune to the powers of imagination, repeatedly suggesting that fictional ideas stem not from an innate curiosity or creativity, but from specific real-world experiences. As such, much of the film’s running time is spent dutifully charting the various personal events that helped to shape the most famous incidents and characters from Tolkien’s novels, ham-fistedly drawing direct parallels between reality and fiction.

Opening during one of World War I’s bloodiest episodes, the Battle of the Somme, the film locates young Tolkien (Nicholas Hoult) in the midst of an unimaginable hellscape. But it never bothers to delve into the realities of his time at war or the specificities of the psychological trauma he experienced there. Such battle scenes are merely sprinkled throughout the film in the form of flashbacks and flash-forwards to provide brief glimpses at the visual touchstones that informed Tolkien’s later writing, as in dissolves between a flamethrower and a dragon breathing fire and from ever-burning fires in the distance into the hellscape that is Mordor.

The bulk of the film, though, unfolds during Tolkien’s no-less formative years when, after the sudden death of his mother, he moves to Birmingham to attend a highfalutin private school. And while the allusions to Tolkien’s later writing are a tad less frequent in these sequences, they’re no less thuddingly blunt in their delivery. Like the fires in the French battlefield, the smokestacks of Birmingham also dissolve into a shot of Mordor; elsewhere, the “stick of authority” that Tolkien and his friends use to mimic their overly strict elders clearly suggests Gandalf’s staff. The repeated references to Wagner’s “Ring” cycle, the favorite opera of Tolkien’s girlfriend and future wife, Edith (Lily Collins), speak for themselves. And the secret brotherhood that John forms with his more passionate and artistically inclined friends is, of course, revealed to be the “fellowship” that lies at the heart of The Lord of the Rings.

But even outside of all this insipid referencing of Middle-earth, Tolkien relies on the overplayed tropes and predictable arcs of both the biopic and films about tortured young artists. With all its rebellious upper-crust teens and strict authority figures hell-bent on crushing the creative spirit as a means of molding more pragmatic young minds, the film most frequently plays out like a tepid regurgitation of Dead Poets Society, preaching of the love of creative freedom without finding an original form of expression of its own. Karukoski himself has said that he wants “those who love the books to be able to trace everything you see in the film forward into Tolkien’s work.” And it’s that sort of reverse engineering that leads Tolkien to do far more service to Tolkien’s fans than to the man whose story it’s supposedly telling.

Review: Dreamland Wears More than Just Its Influences on Its Sleeve

Review: El Chicano Is a Superhero Movie Without the Mythic Grandeur