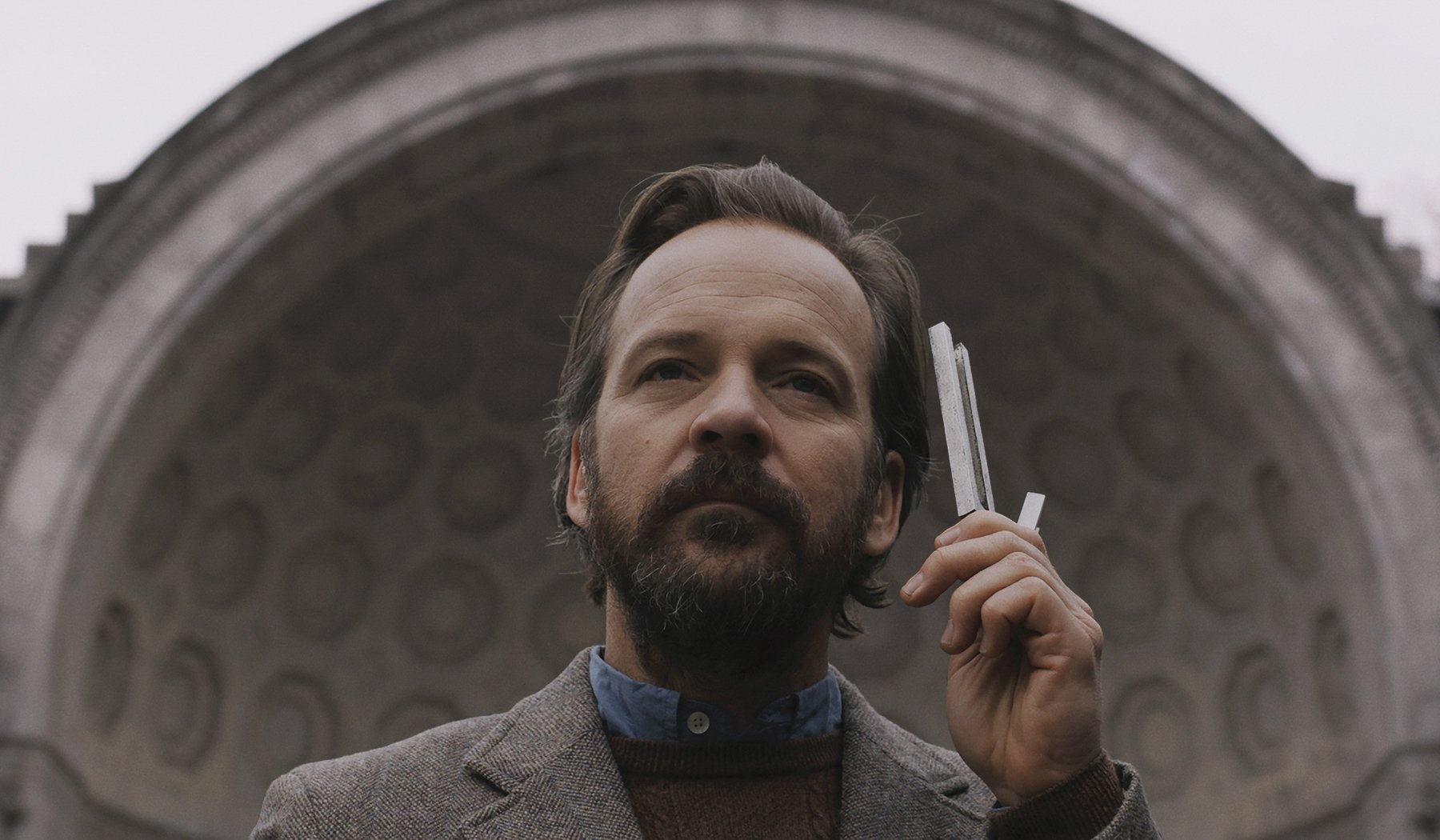 Based on his 2013 short film Palimpsest, Michael Tyburski’s The Sound of Silence is built around a fascinating and eerie premise. Peter Lucian (Peter Sarsgaard) is a “home tuner” who visits people’s residences with tuning forks and specialized recorders and headphones, determining the intricate symphonies of sound spectrums governing the places. Early in the film, Peter declares an old radiator to be a “B flat” and wraps a copper ring around a portion of it, changing its sonic profile and altering the aural dimension of the residence, improving the inhabitant’s ongoing mood in the process.

These opening sequences are the film’s most compelling, as Tyburski emphasizes convincing and intricate details, savoring the pleasure that a professional derives from his work. Peter appears to have found the ultimate introvert’s job, as he must enter a meditative state of quietness, examining other people’s worlds so as to keep his own personal life on ice. Most haunting, however, is the notion of sound as a controlling force—as an everyday god that, as Peter has it, denies humankind free will. In the film, people’s lives are dramatically altered by the smallest adjustments, such as the changing of kitchen appliances.

At times, The Sound of Silence suggests a certain strain of paranoid thriller about men who concoct elaborate conspiracies in order to explain their own alienation from society, such as Francis Ford Coppola’s The Conversation and Darren Aronofsky’s Pi. In the film’s most hypnotic sequences, Tyburski shows Coppola and Aronofsky’s flair for rendering the mechanics of thought process suspenseful. Peter’s job resembles exorcism in certain fashions, and Tyburski encourages the audience to parse the film’s soundtrack, listening for things that are “off.” Like Coppola and Aronofsky, Tyburski viscerally links the protagonist’s job to his mental state, suggesting that the former has become an attempt to ease the imperilment of the latter. Peter is another control freak who needs to believe that we are all puppets.

In the tradition of solitary people all over, Peter takes perverse comfort in the idea that his estrangement is fated, and Tyburski telegraphs Peter’s yearning by offering juicy illustrations of the man’s fanatical efficiency. Intolerant of imprecision and sloppiness (his voicemail greeting is the film’s comic highlight), Peter speaks to people only professionally, and has utilized his knowledge of sound to wall himself off from the chaotic vitality of New York City. Peter’s home, a monument to instruments of the analogue era, is quite reminiscent of the protagonist’s home and working area in The Conversation, while his idea of a date is a cup of hot water with someone in a cavernous hall to the strains of an ancient piano. These details complement Peter’s painstaking professional process, and Sarsgaard, who has a phenomenal ability to communicate thought on screen, is an ideal actor to lead us into this hermetic world.

Unlike Coppola and Aronofsky, though, Tyburski isn’t willing to follow his hero down a rabbit hole of madness. The house-tuning concept gradually takes a backseat to a formula, in which Peter develops a potentially romantic relationship with a client, Ellen (Rashida Jones), who wears her isolation even more pointedly on her sleeve than Peter himself. The Sound of Silence has one great moment in its second half, in which Peter finally loses control of his measured demeanor after an idol tells him that his theories are nonsense, but the redemptive template otherwise slows the film down, dampening its initial mysteries with moralizing.

Yet Tyburski doesn’t ease up on his arthouse mood even as he succumbs to clichés, as the film continues to be formally composed of silences, ringing, and static tension, with almost supernaturally earthy cinematography and somewhat opaque plotting. This combination represents a worst of both worlds: The Sound of Silence loses the initial tension of its artiness, while refusing to entirely sell its blossoming sentimentality. A wonderful high concept is compromised for another story of lonely people learning to connect, but Peter is more interesting, and resonant, when he’s estranged from everything around him.

Review: The Goldfinch Clamors with Melodrama and Existential Anguish