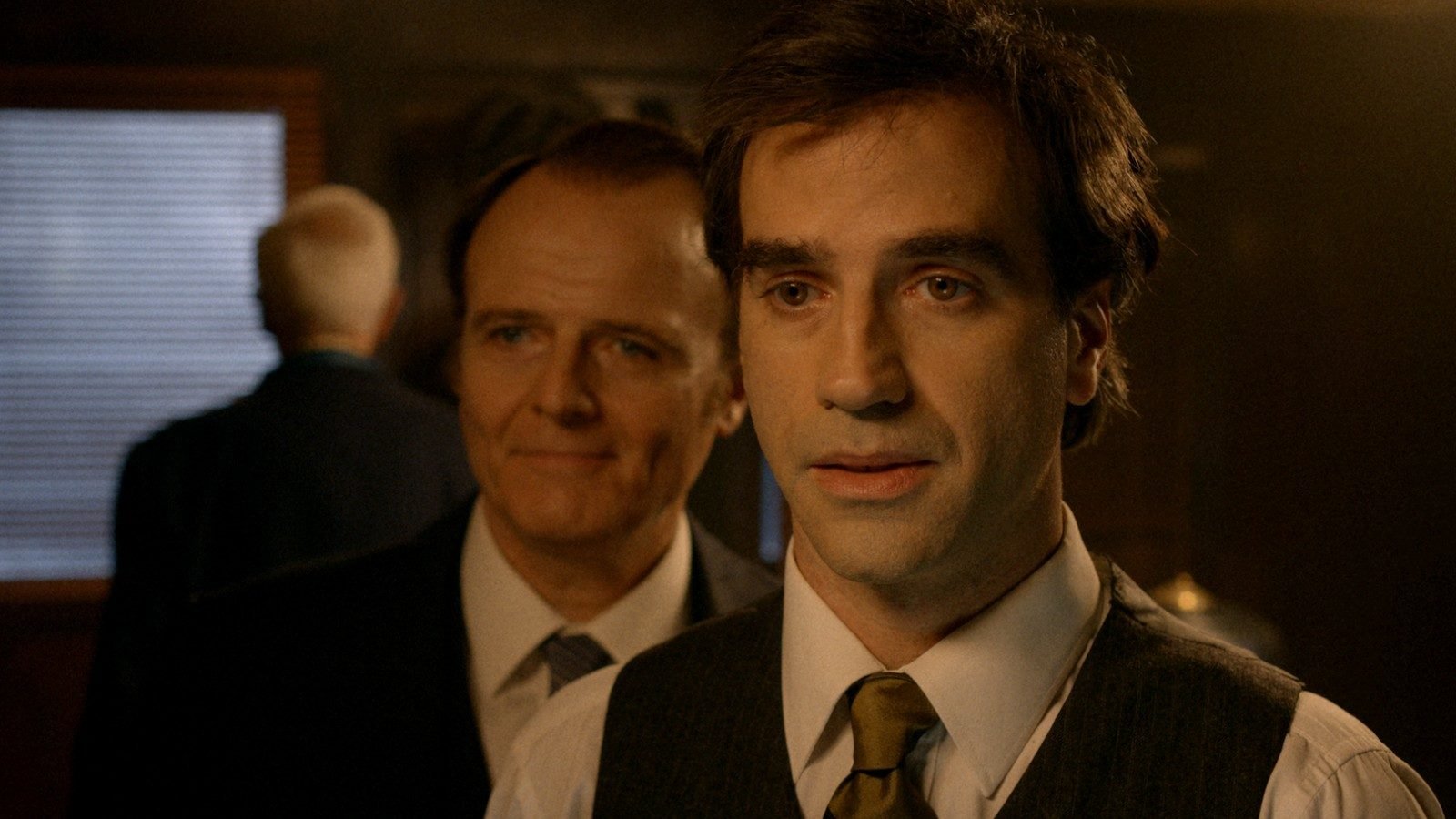 Federico Veiroj makes films about professional men at crossroads or dead ends. His latest, The Moneychanger, takes place over two decades, charting the prosperous, morally rotten career of Humberto Brause (Daniel Handler), a prominent money changer for all manner of ne’er-do-wells. The opening voiceover, aping that of a 1990s-era Martin Scorsese crime epic, immediately strikes a Catholic-confessional pose—and that’s not just because the film begins with Jesus’s cleansing of the Temple.

Humberto is penitently self-denigrating from the moment we hear him speak. As the biblical scene unfolds, the money changer reminds us that his trade has been “the root of all evil” since time immemorial, and Humberto, revealed to be speaking from 1970s Uruguay, begins recounting his ignoble path to becoming a successful money changer. Looking back, even he can’t understand why the respectable Señor Schweinsteiger (Luis Machín) took him on as an apprentice in the ‘50s, but he did, and Humberto learned to enjoy all that money can buy, soon making a name for himself throughout the southern cone of South America.

Veiroj emphasizes the petty life beneath Humberto’s lucrative business suit rather than the job of money changing itself. Much is made of gestures like hand-tailoring suits to transport money, but the movement of cash—from client to Humberto to various far-flung locations around the globe—is by and large curtly presented. One transatlantic money-moving trip is compressed into three shots, and the first of many corrupt dealings ends with a quick handoff of a cash-filled briefcase. Significantly, Humberto’s first real transgression occurs with Schweinsteiger’s school-age daughter, Gudrun (Dolores Fonzi), his eventual wife, as Humberto forges her report card for her during their courtship. Deemphasizing the mechanics of money changing undercuts the ostensive sexiness that might derive from Humberto’s white-collar-criminal lifestyle and instead highlights his own nervous state.

After Humberto does a prison stint and makes his proper entry into the world of criminal money changing, The Moneychanger is characterized by a marked shift in tone. Hendler spends much of the first part of the film feeling like an out of place comedian. He’s goofy looking and can make any suit seem shabby even though his performance is fairly straitlaced, if often telegraphing over-eagerness. Later, Humberto is frequently convalescing with stress-related heart disease or traipsing across the politically fractious region to patch up business trouble with his increasingly dangerous clientele, now an assortment of seedy political agents, opposition figures, and businessmen looking to hide excess income.

By this point, the film verges on the farcical, with Humberto engaging in a Force Majeure-esque act of cowardice during a shooting while driving with his wife in Argentina and a rushed scheme to steal from a dead man before he’s interred, among other indiscretions. While these scenarios are somewhat absurd and funny, they feel calculated in their attempts to stress just how pitiful Humberto has become that he has to turn to such pathetic ploys to stay afloat.

It’s apparent that Veiroj disdains no one so much as Humberto, but the film makes vanishingly little of the man’s undoubtedly twisted psyche. Throughout, The Moneychanger maintains a monolithic meanness, skirting even the smallest gesture of sympathy for Humberto and bulldozing him with further proofs of his depravity—that he’s nothing more than a worm. His skeeziness is clear from the early moment where he informs Gudrun of the STD he gave her just before destroying Schweinsteiger’s trusted name, but Veiroj belabors the point. Where another filmmaker might have identify the virtue in the man’s scrappy acumen, Veiroj seeks further ways to point out that Humberto is cowardly, impulsively greedy, and lustful, despite his successes, continuously underlining in red ink his particular corruption.

In stark contrast to Humberto’s gratingly flat characterization, Veiroj expresses his protagonist’s suffocating work environment in neatly calibrated compositions. In Veiroj’s 2018 film Belmonte, the eponymous painter was often shot in impasto lighting, his airy apartment covered with paintings of agonized, naked men, at times enclosing him in them completely. The Moneychanger has a similarly claustrophobic sense of framing, with Veiroj often emphasizing the edges of an interior space or closing off activity by shooting it through windows and door frames, not to mention a literal bank vault intimating an impending death. The film’s prevailing use of deep blues and gray undertones suggests a queasy depth to Humberto’s offices and his entrapment in these environs. His first heart attack happens right after a boat trip while he’s having sex on a beach, with the horizon is wide in the background.

Humberto’s worst punishment is ultimately the powerlessness his money brings. Prosperity makes him cruddy and pathetic. For all his wealth—yachts, nice clothes, a large home—he spends much of the film sweaty, graying, fretting over secret police or people coming to collect, and a marriage only held together by material comfort. The Moneychanger is in some respects the story of Humberto’s midlife crisis, but it’s more so one about his end. Having pigeonholed himself into a lifetime of dangerous and unpredictable business partners, he’s now stuck. At the film’s conclusion, narrative and personal development are precluded, but so is tragedy. The money will come, life will never get better, or much worse. Humberto’s fate is set: a wife, a kid, a yard, and armed guards to keep it all afloat.