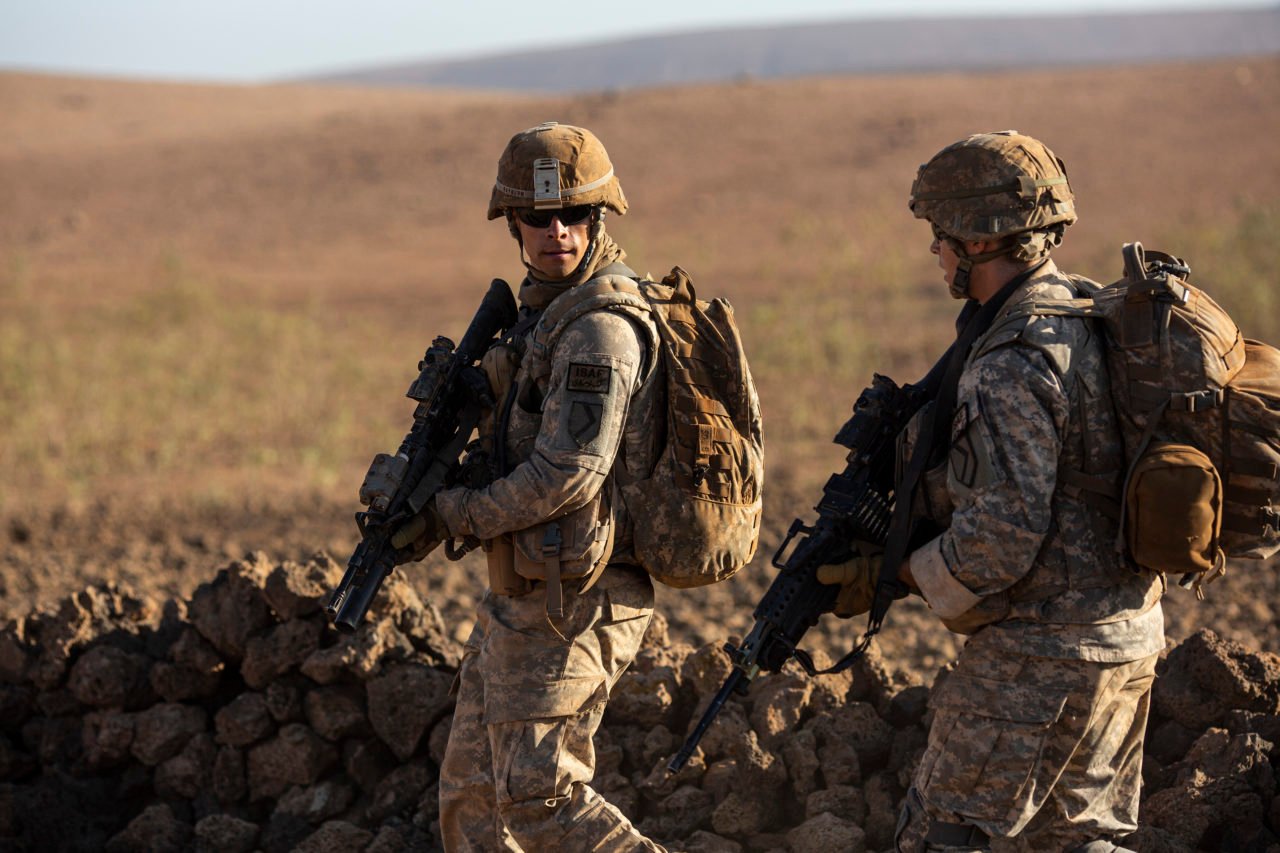 Based on true events from 2009, writer-director Dan Krauss’s The Kill Team suggests that the war in Afghanistan—America’s longest by an unhealthy margin—long ago reached the state of a self-perpetuating feedback loop. The story concerns a group of soldiers whose frustration and rage at the death of colleagues was channeled into a campaign of terror in the Kandahar countryside. Led and allegedly manipulated by a rogue commanding officer, the unit executed randomly selected villagers, framing them after the fact as insurgents by planting weapons next to their bodies and concocting false battle reports.

The Kill Team opens with the death of the team’s commanding officer, Sergeant Bruer (Zackary Momoh), who’s killed by an IED while offering candy to children. Throughout its telling of this and other events, the film sets up Private Andrew Briggman (Nat Wolff) as the audience’s surrogate, an eager and sensitive recruit who observes his fellow soldiers’ actions almost from an outsider’s perspective. He doesn’t smoke hash with his fellow soldiers, and he doesn’t, like them, begrudge the locals their differing traditions and language. He also doesn’t relish the opportunity to fight and kill. After Bruer is killed, his unit is assigned a new commanding officer, Sergeant Deeks (Alexander Skarsgård), an imposing, stone-faced figure who begins cultivating insecure attachments with the men under his command, bestowing and withdrawing favor at a whim in order to make them dependent on his approval.

While Krauss’s film examines the way that the young men’s subsequent embrace of an amoral warrior’s mentality leads to inhuman consequences, its reflection on both the inherent violence of war and the loss of a sense of mission among the occupiers remains incomplete. This battlefront thriller has a clearer moral sense than other cinematic attempts to cope with the conflicts formerly known as the War on Terror, such as Kathryn Bigelow’s Zero Dark Thirty, but it achieves this clarity largely by finding confining itself to a scenario with a clear moral dichotomy: that between the relatively innocent Briggman and the icy madmen Deeks.

In Deeks, the fictionalized version of the real commanding officer convicted of encouraging the young men to view all Afghans as animals, Krauss captures the sociopathy of a truly committed warrior. To play a killer who entices young men to join him in almost ritualistic slaughters, Skarsgård deploys the coldly attractive moral nonchalance familiar from his role as the vampire Eric Northman on HBO’s True Blood. “We kill people. That’s what we do,” Deeks explains softly and plainly to the uncomfortable Briggman at one point. Briggman averts his eyes, attempting to square the apparent truth of Deeks’s warrior philosophy with the “hearts and minds” mission his unit has often been sent out on.

Deeks turns missions into hunts, compelling the men under his command to find an Afghan man to be shot. In these scenes, which frequently cut away from the actual act—to, say, Briggman coming across the men discussing their cover, or to the body of an Afghan man lying on the ground behind them—we can see one end of a thread tying together American forms of authoritarian violence. The murder scenes captured from Briggman’s perspective on the margins, or just after the fact, strike an overtone that resonates with the police shootings and cover-ups that have triggered unrest at home while our Mideast wars have been raging.

The Kill Team gives us snapshots of a rural Afghan population whose hearts and minds are, as of 2009, very much not won over. Men and women alike shout fruitlessly in Pashto as their loved ones are pulled aside by the American soldiers. The trembling, battered face of a man picked up from the road outside the U.S. base, and whom Deeks attempts to convince Briggman to torture, is a powerful image that could stand as an indictment of the war itself. But the story limits its perspective to the experience of Briggman as he struggles internally, and in messages back home to his father, with what to do about the situation. The film’s focus on the private only becomes more acute as the circle around him tightens, the group of killers growing concerned that he will rat on them. The lives of the villagers killed becomes of secondary concern, as suspense in The Kill Team is increasingly driven by the question of whether Briggman will survive or be betrayed and murdered by his compatriots.

Krauss’s evident outrage at the commission of war crimes is something that’s sorely lacking in what meager public discourse about our continuing wars exists, but it doesn’t follow this outrage to what seems its logical, if radical ends. As the sergeant not entirely inaccurately asserts, the Army is there to kill. Given such a directive, perhaps liberal fantasies of a “clean war” are untenable. Warfare breeds bloodthirst; it produces people like Deeks. But despite glimpses of a larger critique of the American project in Afghanistan, and of the psychological and social sicknesses cultivated by two decades of continuous warfare, The Kill Team lets us escape from the horrors of war before it finishes demolishing the illusion of a clean one.