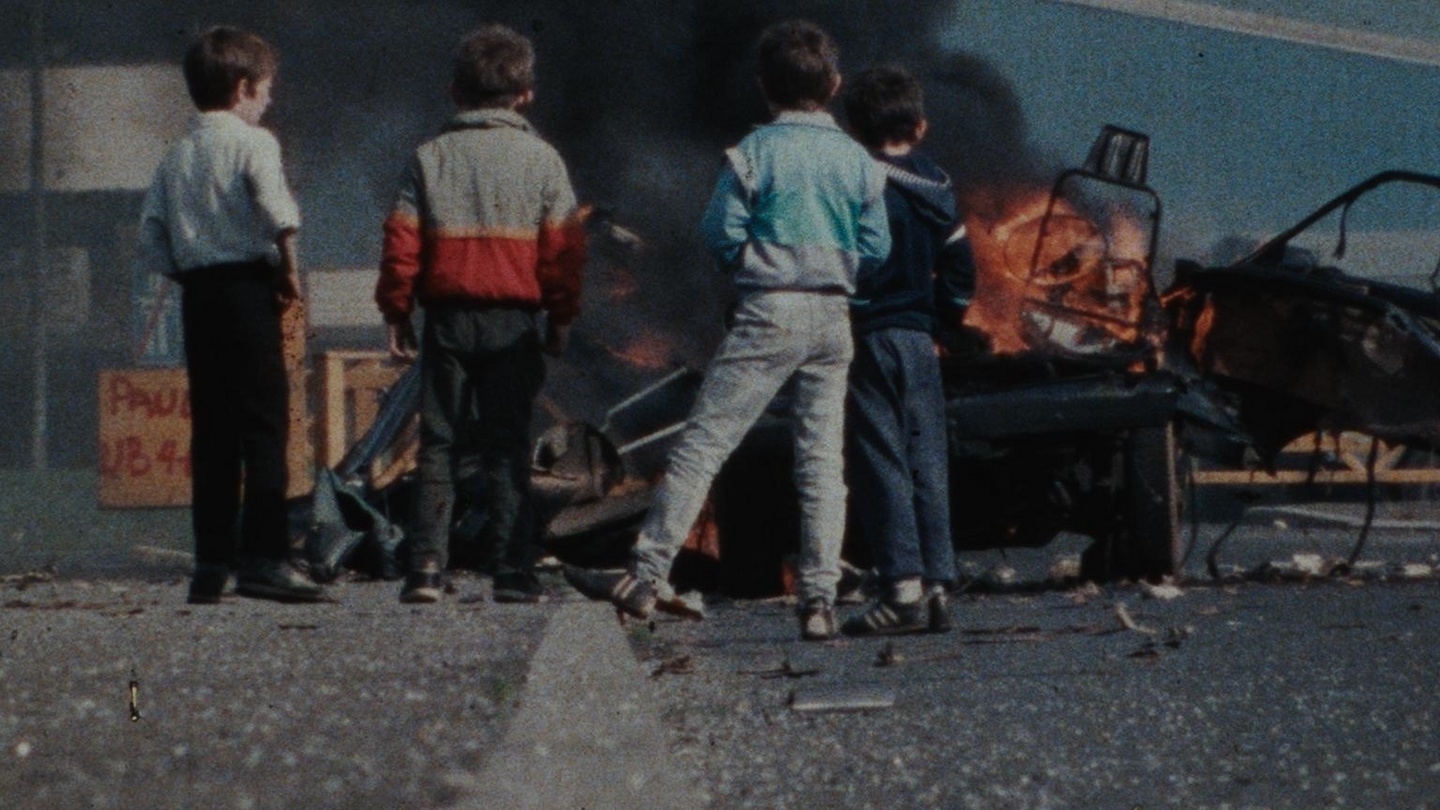 Dónal Foreman describes his late, estranged father, filmmaker Arthur MacCaig, as “an American living in Paris, making films about Ireland.” MacCaig was a displaced but nevertheless trenchant voice in the battle against Britain’s occupation of Northern Ireland, and his documentaries—stirring counter images to the British mass media’s demonization of the I.R.A.—hit like splinters in the empire’s eye. The Patriot Game, from 1978, is perhaps his most famous, striking for its radical politics, dynamism, and its compression of 300 years of history into a legible narrative arc, from centuries of cultural colonization by the British all the way through to the start of the Troubles in the late ‘60s.

Started in the wake of MacCaig’s death in 2008, The Image You Missed is composed of archival footage shot by MacCaig and finds Foreman exploring a variety of connections in their relationship—or, rather, the lack of one. Foreman traces a portrait of his father, who never seemed to have the time to make it from Paris to Dublin to visit him, from all this footage: a train bridge MacCaig once rode over, a character named Dónal from one of his unproduced screenplays, similarities between Foreman’s childhood movies and MacCaig’s own, a relative’s footage of Northern Irish cities taken at the same time MacCaig was on the ground filming.

Foreman’s documentary also sees him obsessively parsing coincidences and missed connections. He clings to them as so many furtive psychic lodestars, so as to bring MacCaig closer to him. Even the referent of the “you” in the film’s title is overloaded with meaning. It’s probably directed to MacCaig, but it could just as well be aimed at British viewers. Or, perhaps, it’s self-reproach on Foreman’s part, as he sifts through MacCaig’s archive.

This is a personal essay in the shape of one man’s projection of another man’s life. It’s undoubtedly first-person, but being, as the opening credits reveal, “a film between Dónal Foreman and Andrew MacCaig,” The Image You Missed avoids squarely being about either man. Foreman offers only a few biographical details about his life—that he’s from Dublin, made movies starting in 1997, and moved to New York City—while offering plenty about his father’s own, drawn from photos, memories, MacCaig’s travels, readings of letters, interviews MacCaig gave, and even snatches of the occasional appearances he made in his own movies. Foreman provides much of the voiceover, and yet he feels most present when noting his father’s absence, as in his footage of Occupy Wall Street accompanied by the complaint that he lacks his father’s ability to see the whole picture of a political moment.

At one point, Foreman remarks on MacCaig’s intransigent refusal to depict fractures in the anti-British forces: “shot, reverse shot, nothing in between.” It’s an impression of unity that The Image You Missed seeks to find in its correlation of Foreman and MacCaig’s lives. One virtuosic sequence shows a home video of one of Foreman’s friends emerging from a closet covered in fake blood, from which Foreman cuts to footage from a MacCaig film depicting a bloodied man emerging from a building in Belfast, which then cuts to an image on a television screen, which then becomes an image on an editing machine during a video interview with MacCaig. The sequence is essentially a reverse of one from The Patriot Game that begins on a TV screen and ends on the streets, and underscores the distance between Foreman and MacCaig, a maze of images in which father and son fail to meet each other.

Political images, or politicized ones, have a paradoxical effect when they’re divorced from the specific times and places that motivated their creation. As documents of their time, they hold the directness of testament; as products of unfamiliar conditions, they can be inscrutable, alienating. The Image You Missed is cut through with Foreman’s separation from his material. As a Dubliner, he was removed from the political situation that informed his father’s films on Northern Ireland. Born in 1985, he can’t grasp the political spirit that drove MacCaig and his generation to armed warfare against the British occupation during the Troubles.

The Image You Missed begins “in the wake of the failure of those movements, the failure of those images,” playing out the difficulty of reaching across time to finally depict the political milieu in which MacCaig lived and worked. It lends a persistent taste of lament for this bygone political moment, best exemplified by frequent contrasts between MacCaig’s films and Foreman’s contemporary footage of advertisements covering political murals and tourists taking selfies at peace walls. And Foreman seems especially disappointed when showing an interview in which MacCaig, who swore to fight until the end for a unified Ireland, embraced the parliamentary peace that ended the Troubles but failed to unify the island.

This attitude often vacillates between disenchantment with MacCaig and with the independence movement as a whole, such that it can be difficult to disentangle Foreman’s political observations from his feelings about MacCaig. This twinning of the political and personal can feel oppressive, but it forces us to navigate the uncomfortable way these elements almost seem to refuse separation in Foreman’s own biography. Often, Foreman directly identifies himself with the distance between his and his father’s politics, as when, over his dad’s footage of an Irish Pride parade in New York, he rebukes MacCaig’s brand of nationalism: “I always thought of myself as from a place, not a nation.”

One can see in all this a flirtation with a leftist melancholia, the defeatist sense that the radical days have come and gone, now that the fervor that drove the I.R.A. and other anti-imperialist struggles has receded. One can also see Foreman entertaining a hope made all the more important for its private meaning. He’s searching his father’s archive for whatever will invite a reconciliation. In dwelling on the slightest resonances with MacCaig’s world, he makes reunion, however elusive, seem momentarily necessary.

Review: Godzilla: King of the Monsters Swings Erratically for the Fences