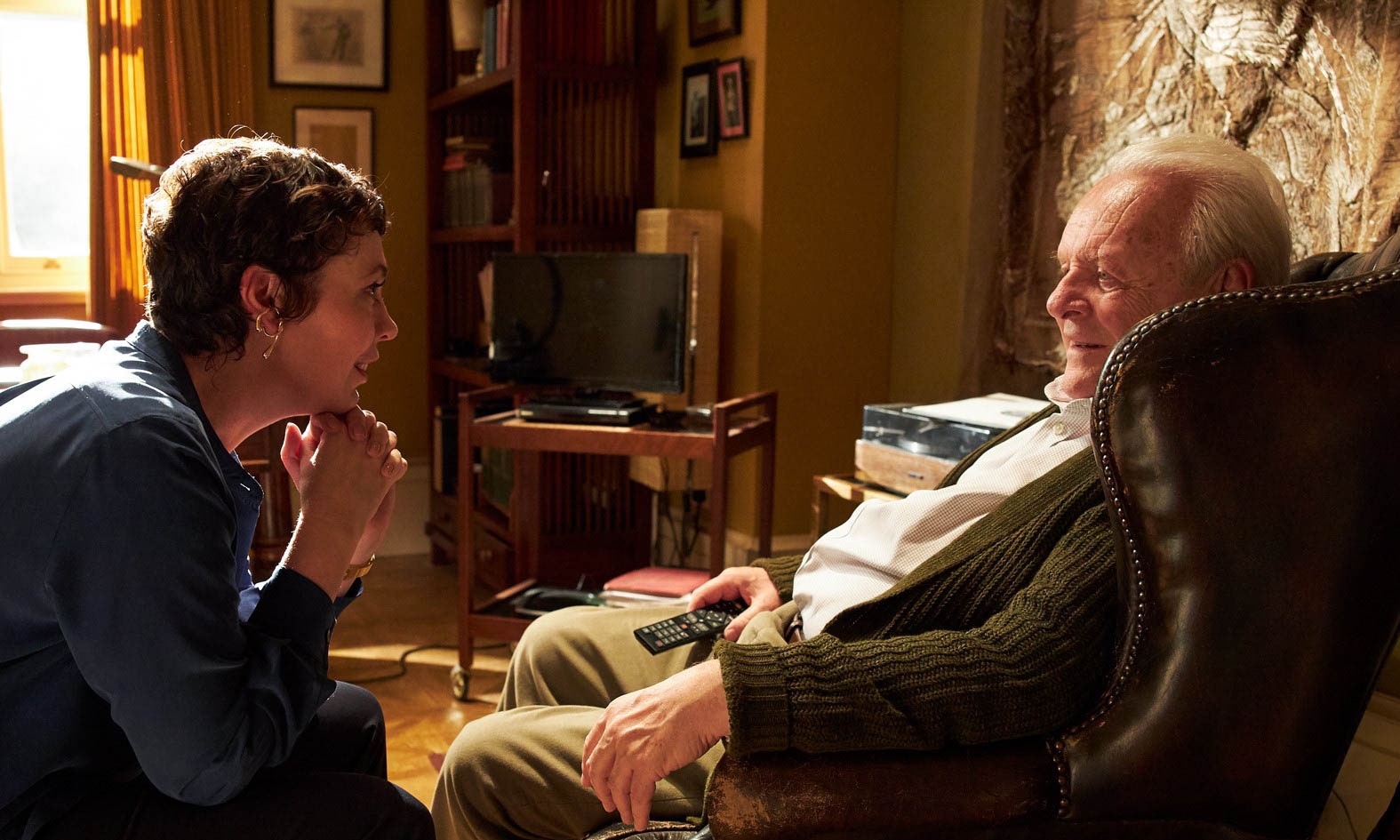 A quietly terrifying drama about dementia, Florian Zeller’s adaptation of his 2014 play The Father starts off inauspiciously as a simple chamber piece in which a daughter spars in semi-comic exasperation with her retired father over his inability to live on his own anymore. Set in a tony London flat, the drama initially appears to take place inside the kind of tastefully cinematic milieu where nothing earth-shattering ever seems to happen. But before long, Zeller upends expectations by revealing the true depths of the father’s problems through dramatic perspective shifts that undermine any sense of cozy remove.

The Father begins with Anne (Olivia Colman) coming into what appears to be the flat of her father, Anthony (Anthony Hopkins), intending to have a big talk about how he’s chased off the latest home health aide she hired to look after him. The two bat their arguments back and forth. She’s patient but ever more anxious, needing him to understand that he is not as self-reliant as he imagines. Meanwhile, he ducks and dodges, first waving off her assistance in apparently fully cogent “I don’t need anyone” fashion before suddenly launching into a more reality-disconnected rant about his supposedly stolen watch. The more she communicates her concerns, the more he begins to panic that soon his independence is going to have more limits. The more he panics, the more apparent the cracks in his cognition become.

Even though these early scenes feel somewhat familiar, Zeller exhibits a sublime confidence in his actors during these early moments that’s well rewarded. Colman’s performance is centered on a thinly held restraint; Anne is desperate to be calm and reassuring even as her panic over what to do is boiling up inside. Even though the title role is the sort of thing that Hopkins could breeze through without exerting much effort, he delivers a wonderfully subtle, well-calibrated, and occasionally surprisingly emotive performance. As Anthony’s mental misfires shunt him from one mood to the next with little warning, Hopkins deftly toggles between multiple overlapping moods and threads these states together with a keen vulnerability that ratchets up dramatically once Zeller starts throwing curveballs at Anthony and the viewer.

The Father approximates the dislocation of Anthony’s mind with a frighteningly slippery ease. One moment he will be in an argument with Ann, and the next there will be a man (Mark Gatiss) he doesn’t recognize sitting in the apartment saying that he lives there. Anthony becomes confused because Ann just told him she is moving to Paris with her new husband, which is why she wants him to have an aide in his flat. But then different people start coming through and telling Anthony different things, such as this may actually be Ann’s flat, and that she’s thinking about putting him in a home. Further straining his grip on reality is the untethering of characters to fixed personalities (they give him a name in one scene and then a different one later) and the addition of new characters (Rufus Sewell and Olivia Williams) who directly refute what he’s previously been told and look at him as though he were losing his mind. As Anthony’s confusion and paranoia mounts, the reactions from Ann and the man who may or not be her husband become increasingly strained in response.

Once Zeller makes the entirety of what we’re seeing up for grabs, the film enters a state in which Anthony is caught in the same slipstream of distorted reality as the audience. Zeller does this unobtrusively, with no jolting music stings or tension-tightening edits, just the steady accretion of contradictory details and suggestions (is this his flat? Did that man really just slap him?) that chip away at Anthony’s foundation of certainty. In scrambling expectations for the audience, Zeller puts them in the same position as Anthony, confused and looking for something to hang on to. Like Vonnegut’s Billy Pilgrim, Anthony has become unstuck in time. Unlike Pilgrim, who remembers everything at once and lives an entire lifetime simultaneously, Anthony can only watch as his mind slowly erases everything he once knew.

Review: Hunter Hunter Is a Survival Thriller with a Haunting Stinger in Its Tail