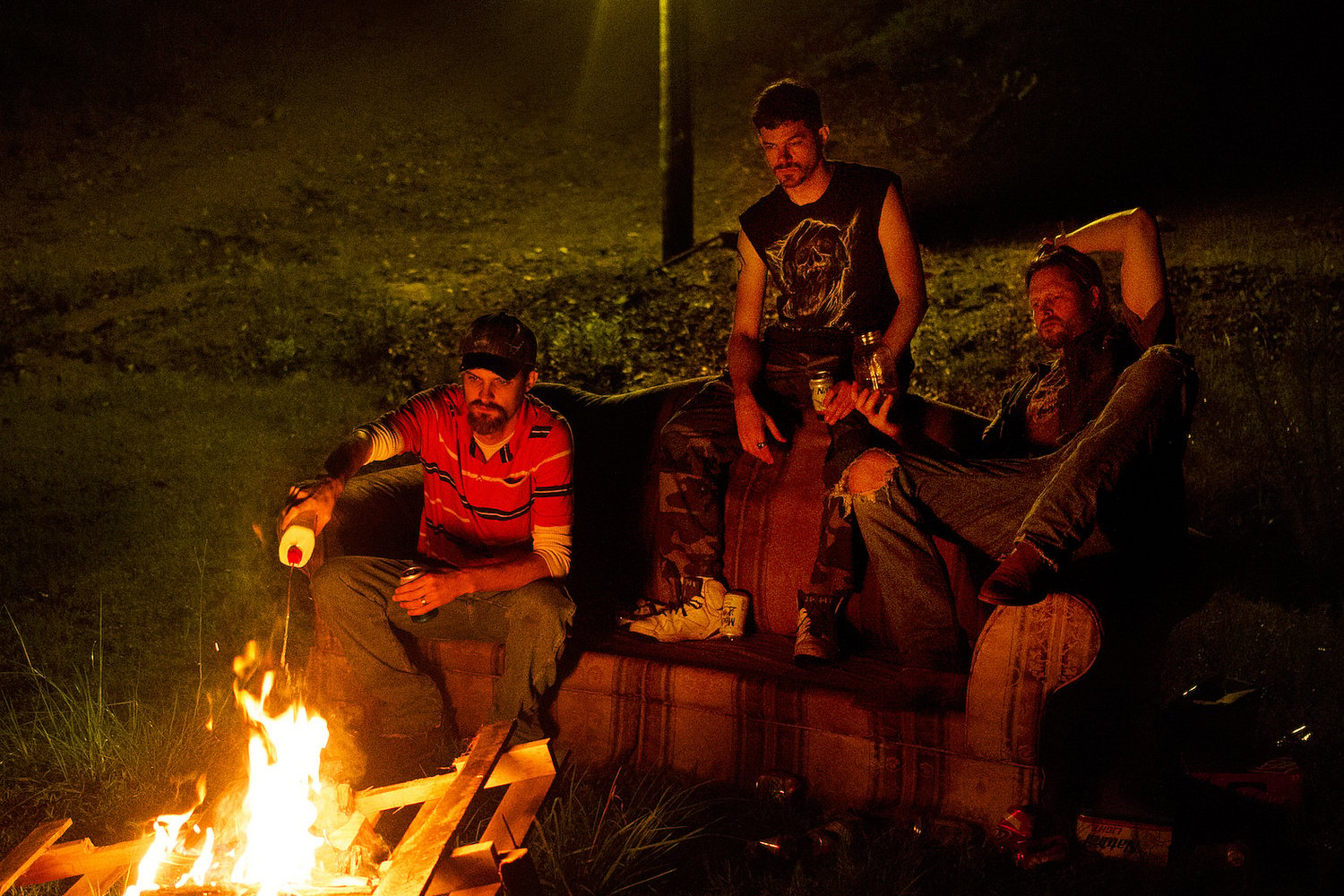 For a film populated almost completely by utter morons, Daniel Scheinert’s The Death of Dick Long is shot through with a surprising emotional complexity. While its characters may appear to be, and often behave as, stereotypical rednecks and bumbling small-town cops, the film approaches them not with contempt, but with a bemused kind of empathy, finding a very human vulnerability lurking beneath their strange and oafish behaviors.

Make no mistake, the people in the film do some pretty bizarre things. “Hey, y’all mother fuckers wanna get weird?” the soon-to-be-deceased title character (Daniel Scheinert) asks his ne’er-do-well pals, Zeke (Michael Abbott Jr.) and Earl (Andre Hyland), after they’ve just wrapped up band practice and Zeke’s wife (Virginia Newcomb) has put their little girl (Poppy Cunningham) to bed. And so they do, shotgunning beers, smoking tons of weed, shooting off fireworks, and firing rifles in a raucous intoxicated haze, all of which is captured in elegiac slow motion, and lit with chiaroscuro beauty. But The Death of Dick Long withholds the truly freaky stuff these guys get up to that night until nearly an hour into its running time. All we know is that somehow this evening of country-fried debauchery results in a fatal injury to Dick, whose near-dead body Zeke and Earl unceremoniously dump at the local hospital.

The film proceeds as a Deep South riff on the Coen brothers’ Fargo, with Zeke and Earl desperately, and very stupidly, attempting to cover their tracks. At one point, after dumping Zeke’s blood-soaked station wagon in a pond (shades of Hitchcock’s Psycho), the two men find that the water is so shallow that it only covers half the car. Meanwhile, Officer Dudley (Sarah Baker), who feels like Marge Gunderson’s supremely incompetent cousin, is, well, cold on their trail. She’s excited to be on such a big case, but her natural sunniness and trusting nature consistently blind her to the painfully obvious clues sitting right in front of her face.

When the cause of Dick’s death is finally revealed, it’s shocking, horrifying, and brutally funny, a hugely satisfying answer to the film’s central mystery. But it’s also weirdly moving, a tragicomic peek inside the fragile, fucked-up heart of the disaffected white American male. Like John Cassavetes’s Husbands or Todd Phillips’s Hangover films, The Death of Dick Long recognizes the potential for both humor and horror in a certain kind of toxic male homo-social relationship that’s based primarily around getting utterly hammered.

Scheinert approaches this tricky material with the same tone of wry pseudo-sincerity that he and Daniel Kwan brought to their 2016 film Swiss Army Man, keeping the audience at a slight remove from the characters’ outlandish travails while still investing us, on some level, in their emotional journey. Scheinert’s careful foreshadowing of the reason for Dick’s death is so subtle and clever that one is likely to identify the hints only in retrospect. If The Death of Dick Long’s Coenesque tone of ironic distance often encourages us to laugh at this collection of buffoonish weirdos, Scheinert never loses sight of their fundamental humanity.

Billy Chew’s screenplay sharply explores the bizarre and shame-filled byways that result from straight men shutting out the women in their lives in order “get weird” together. And the impact of the film’s plot revelations derives in no small part from the reactions of its female characters, who discover how little they truly know about what the men in their lives get up to when they’re not around. For Zeke, Earl, and Dick, getting drugs and going wild is their haphazard, self-destructive means of fleeing from the demands of their lives, which they’re ill-equipped to deal with responsibly. While the film never lets them off the hook, dropping countless hints about how indolent, pathetic, and dependent on the women in their lives they are, it also recognizes the loneliness and despair that lies deep in their hearts.

Review: Abominable Is Both Poignant Tale of Grief and Commodity Fetish