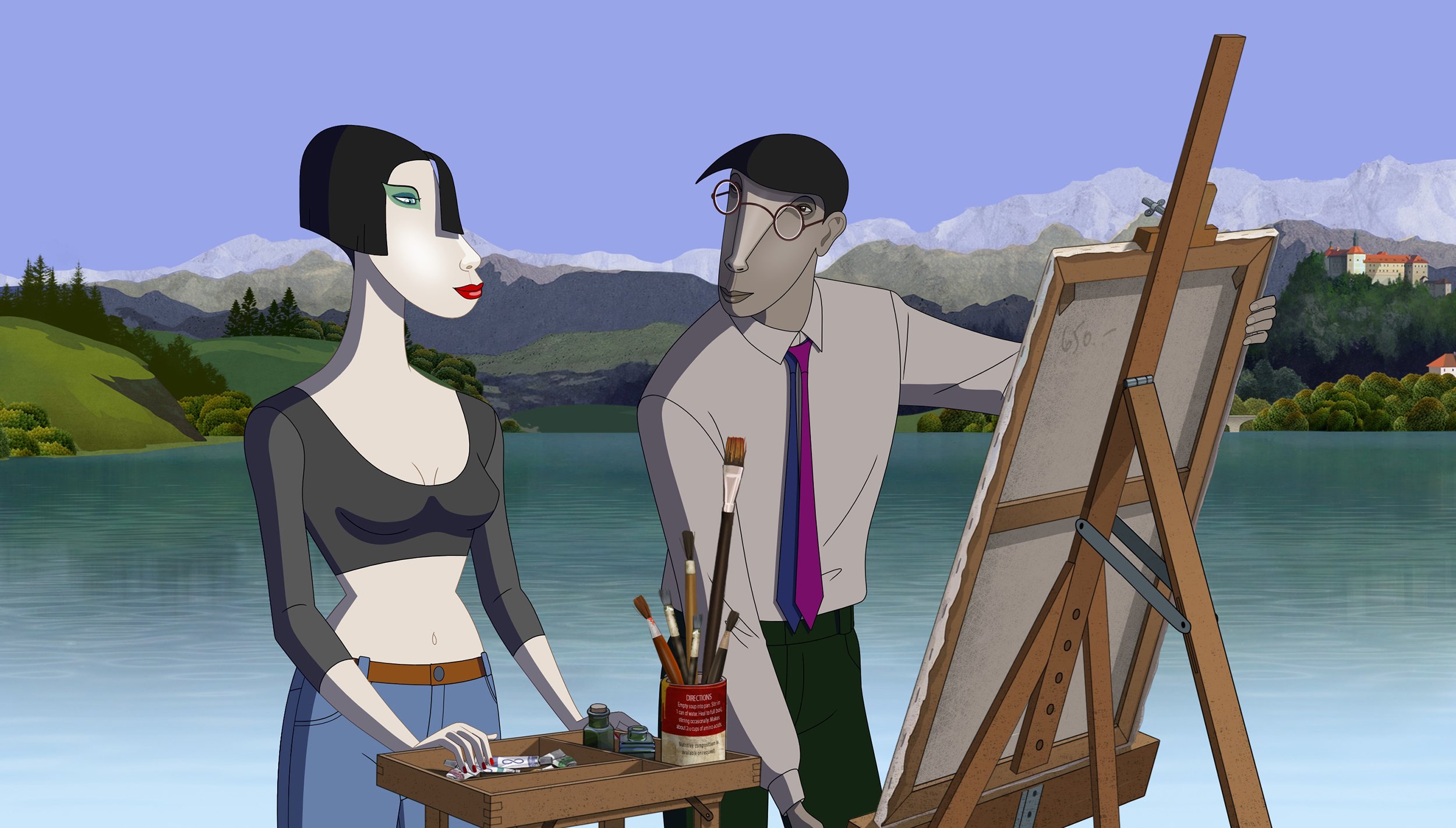 Anything thrilling can be broken down into moments of dullness. A car chase, at the atomic level, is someone turning a wheel, working a pedal, looking sidelong into a small mirror. These elements must be assembled just-so to yield the desired adrenal response in the viewer. Ruben Brandt, Collector has ambitions of being a thrilling assemblage. A work of largely hand-drawn animation, it can range without undue budgetary strain across a wide array of spectacle: train capers, fisticuffs, hot pursuits, violent ends, exotic locales, hot-air balloon rides, and glass-bottomed pools. What it can’t do is apply the necessary touch and precision to balance these sleek, chromed parts into a revving whole.

Ruben Brandt (Iván Kamarás) has bad dreams. In each, a different work of art tries to assault him: Andy Warhol’s Double Elvis guns him down; one of the men from Edward Hopper’s Nighthawks stabs him in the throat; and Botticelli’s Venus, having transformed into a tentacled horror, pulls him into the sea. It’s all too much for Ruben, who just wants a good night’s sleep. Fortunately, he’s a psychotherapist who numbers several master criminals among his patients, and this loyal clientele hatches a scheme to steal the troublesome works of art and turn them over to him so that, by the power of possession, he can render them inert. In the meantime, the gang is pursued by man of mystery, Mike Kowalski (Csaba Márton), as hints are dropped regarding some past trauma responsible for Ruben’s fear of oils.

Director Milorad Krstic has worked primarily as an artist, and his film’s heavy plotting is paired with dense, allusive visuals, crammed with homages and asides (ripe for a tie-in: Hitchcock-shaped ice cubes). Even outside of Rubens’s dreams, various great works of art are referenced, reproduced, and mined for parts, though most of the film’s imagery is ultimately filtered through a noirish, sharp-shadowed cubism. Characters often have one too many features, or wear their profiles on the front of their faces. The result is sometimes striking but also a bit oppressive. Krstić is drawing from the dead center of the Western cultural tradition, and his visuals can have a fusty weight. In the end, the film feels like browsing through a museum gift shop where every mug and calendar is a celebration of some masterpiece.

Ruben Brandt’s caper plot, silly and self-consciously action-packed, should offer a countervailing lightness. Unfortunately, it never manages to come together into a satisfying whole; the elements never engage, never magnetize with each other. Much of the fault lies with the film’s lack of fluency with traditional genre forms. There are several heist sequences, for example, but none attempt the elongated, calibrated plan-act-react pleasures that lie at the clockwork heart of a Bob le Flambeur or an Ocean’s Eleven film. Instead, we get one quick fun bit followed by the next, small scenes that only glancingly reference each other and that could almost be played in any order. The point of a great heist is the linkage, the build to something big, the “and then.” Ruben Brandt only gives us the “and.”

Even the giant truck-mounted crane claw that enlivens the film’s capstone car chase can’t substitute for a broader commitment to setup and payoff, the low-glamour work of playing on our nerves. As a result, there’s little tension to Ruben Brandt, which constantly falls back on visual ingenuity to maintain our interest. And when the visuals flag, as they do during a long, ill-considered fight scene that takes place in a featureless room, then all this frenetic activity is just tiring. Krstic’s film is more compelling when it pauses, when it scales down, as in its striking opening vignette. In it, a snail heaves its long flexible shell-pinned body over a length of track, as a train bears down on it. It might be a throwaway bit, but all the elements thrillingly cohere: the weight of the shell, the hard angles of the track, the train’s awesome size, the final soulful flop with which the snail escapes being crushed.

Review: The Golden Glove Is an Exploitation Movie in Search of a Message