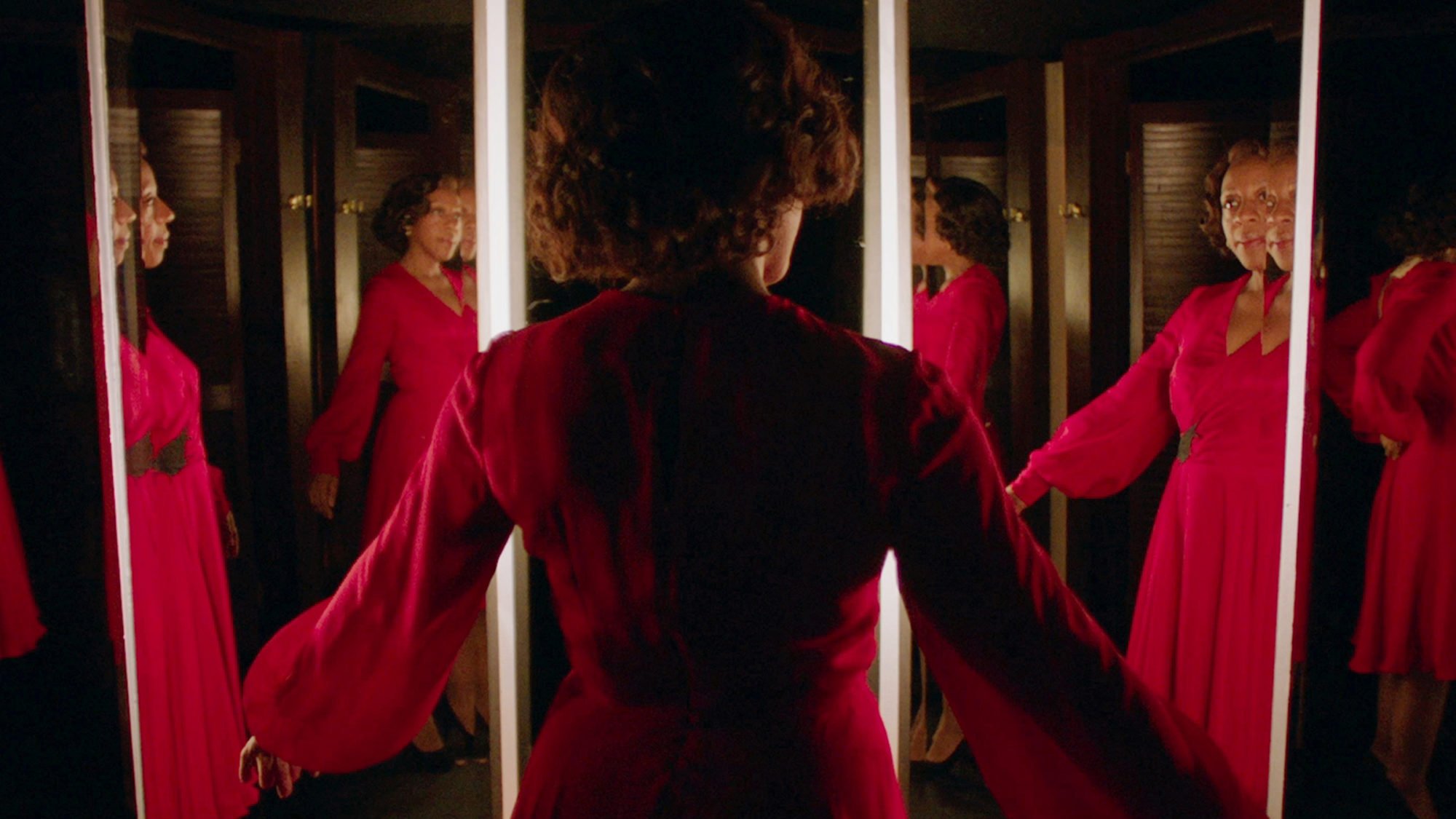 Peter Strickland’s films are fetish objects that rue the perils of fetishism. The British filmmaker’s characters are walled off from others, channeling their longing into various acts of aestheticism, which parallels his own obsession with emulating the stylistics of the giallo, softcore pornography, and classic European chamber dramas. In Fabric finds Strickland doubling down on these qualities, mounting a gorgeous and lonely horror film that expresses emotion via a series of increasingly abstract motifs. Strickland allows his dreamy atmosphere to take over the film, as the characters are eaten alive by their hungers and uncertainties, though this free-floating reverie has a moralistic streak.

In Fabric’s object of longing is a red dress that has a way of shifting its shape to perfectly emphasize the curves of whatever insecure woman is wearing it. The film’s opening shot shows the dress arriving in a package that’s opened with long antique scissors—an image that Strickland freezes on to signify the specialness of its delivery. The freeze frame is also there for its own inherent stylistic pleasure, suggesting the totemic thrill of consumerism, which is driven first by coveting objects. (The film is ostensibly set in the 1990s, though Ari Wegner’s grainy, vibrant cinematography suggests the ‘70s.) Montages of such freeze frames pop up throughout In Fabric, and characters consistently reference the sales specials at a boutique store called Dentley and Sopers, which serves as the narrative’s malign nucleus.

The very conception of the store is one of Strickland’s best jokes. Dentley and Sopers suggests a coven, as Strickland rhymes witchcraft with the cultish behavior of employees of ritzy stores that many of us can’t afford and subsequently fail to comprehend. Presiding over the shop is Miss Luckmore (Fatma Mohamed), who pitches garments to women in speeches that are both poetic and brazenly absurd. (“The hesitation in your voice, soon to be an echo in the recesses of the spheres of retail.”) Miss Luckmore talks in spells and dresses like a vampire—with a black wig and white kabuki makeup that suggest Robert Blake’s demonic prankster from Lost Highway—because why the hell not? Strickland stirs his influences together and asks his audience to drink up, and the film’s pleasure springs from his effrontery.

Strickland unleashes one particular moment of show-stopping surrealism. At night, Miss Luckmore and her underlings undress a female mannequin, sensually caressing its breasts and stomach. Gradually, they remove the mannequin’s underwear to reveal real pubic hair and a vagina that has the capacity to menstruate. Miss Luckmore dips her finger in the menstrual blood and licks it, while an older man (Richard Bremmer), another of the boutique’s ghouls, furiously masturbates. In this scene, Strickland daringly suggests the link between sexual frustration and consumerism (not to mention filmmaking), while plunging into the ether of his own fantasies. This link is also embodied by the sensual flow of the dress itself, especially as it billows supernaturally in the air, causing damnation for those who buy it.

The first woman to buy the dress is Sheila (Marianne Jean-Baptiste), a fiftysomething single mother who works as a bank teller under stifling conditions and suffers the indignation of her spoiled teenage son, Vince (Jaygann Ayeh), who routinely has loud sex with his older lover, Gwen (Gwendolyn Christie). Everyone speaks to Sheila with open contempt, including the boorish men she meets from want ads. If Strickland is stacking the deck here, having everyone relentlessly pile on Sheila, he nevertheless unearths a real behavioral texture: the tendency to resent those who are most in need. Sheila’s loneliness and eagerness to please, while moving, also scan as weakness, which Jean-Baptiste dramatizes with a subtle, tightly coiled fervor. When Sheila slips on the dress, Strickland gloriously frames her in a triple split screen of mirrors, suggesting the rebirth for which she’s longed.

If Strickland had homed entirely in on Miss Luckmore, Dentley and Sopers, Sheila, and the red dress, In Fabric might’ve achieved the insular emotional power of Berberian Sound Studio and The Duke of Burgundy. For its first hour, and for certain stretches in its second, In Fabric has the same ephemeral lushness. This time, however, Strickland springs gimmicks with diminishing returns. Dentley and Sopers is an evocative and weirdly sexy expression of how commerce clouds our dreams and hang-ups, but the corporate satire at Sheila’s bank offers an oblique yet stale rehash of Office Space and the various incarnations of The Office, with a bit of Roy Andersson-style absurdism thrown in for a bit of art-house flavor. And Sheila’s story is brutally curtailed just as it’s gaining momentum, just as Sheila threatens to gain autonomy and break the shackles of Strickland’s bleakly rapturous worldview.

At its halfway point, In Fabric starts all over again, utilizing the bifurcated structure of Psycho and Death Proof. Those films narratively and formally mutated with the killing of pivotal characters, while a “business as usual” quality begins to seep into In Fabric, despite the grounded and moving performance by Hayley Squires as the dress’s next intended victim, Babs, who recalls a nightmare she once had of getting skinnier while her dress size nevertheless ballooned. Such a moment underscores the film’s strengths as well as its weaknesses. Despite the pull of Strickland’s formal fireworks show, there may be too much “theme” in In Fabric. The dress is too insistently offered up as a demon of capitalist manipulation. It might’ve been even more chilling, and resonant, if it were simply deathly pretty, if people desired it because it was simply innately desirable.

Interview: Céline Sciamma on Redefining the Muse with Portrait of a Lady on Fire

Review: Daniel Isn’t Real Is Haunted by Its Superior Predecessors