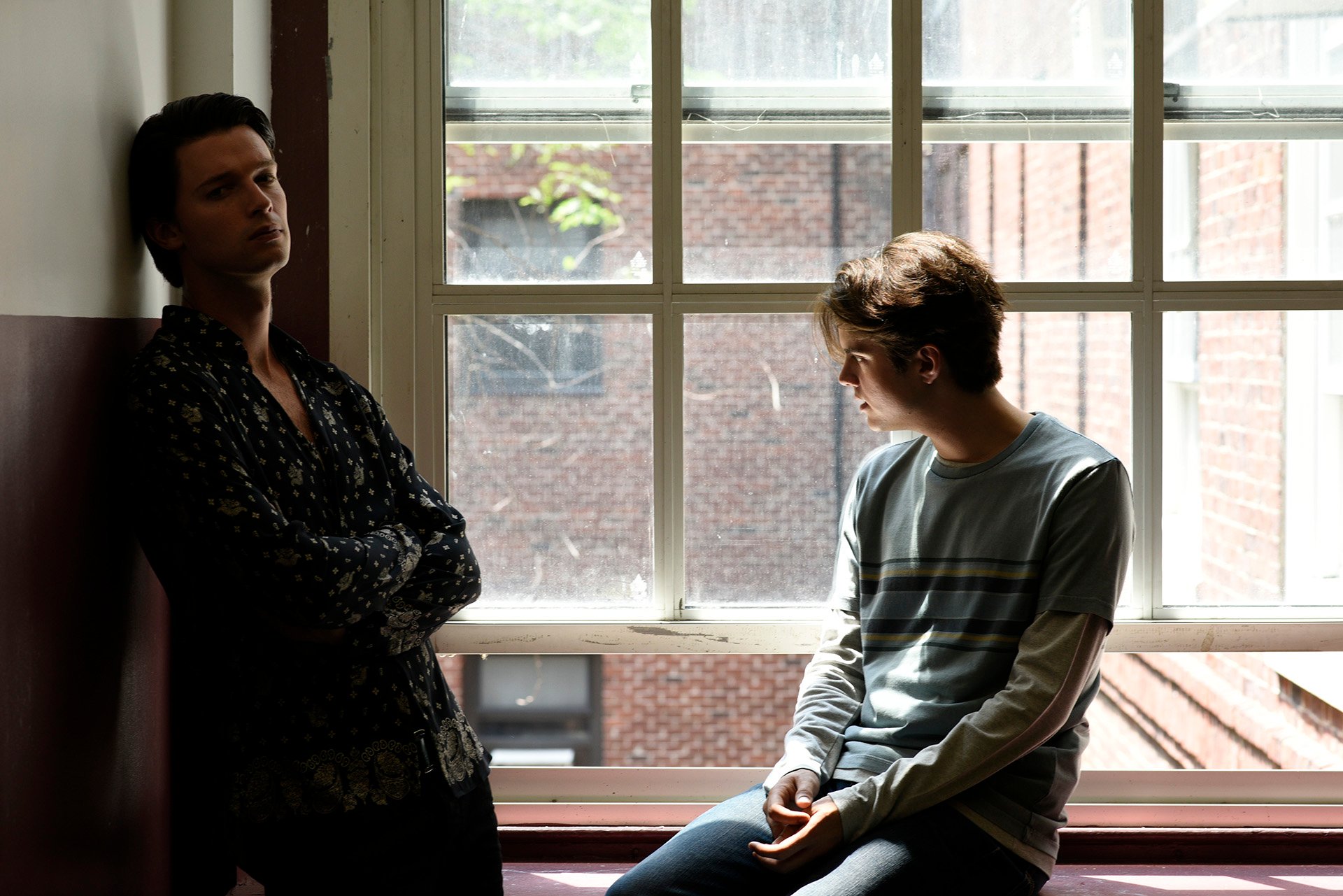 Adam Egypt Mortimer’s Daniel Isn’t Real opens with a close-up on a warm-hued milky swirl that spirals into darkness. Mortimer’s repeated use of this initially unmotivated visual symbol—spirals will reappear at significant moments—adds a feeble art-film aura to this familiar story of masculinity on the verge of violent disintegration. This abstract symbolism, along with the use of oversaturated colors and visions of bodily transmogrification, signal that Daniel Isn’t Real belongs to the nebulous subgenre of psychological horror. But these elements are little more than fashionable window dressing, thinly masking a rather banal view of male subjectivity and inner conflict.

It’s clear that two of the film’s major reference points are two turn-of-the-millennium men-in-crisis classics: Richard Kelly’s Donnie Darko and David Fincher’s Fight Club. Perhaps the filmmakers intend the relevance of the story—based on a 2009 novel by Brian DeLeeuw, who also co-wrote the screenplay with Mortimer—to distance the film from its predecessors. It opens with a mass shooting that’s presented, with effective terror, from a single, circumscribed perspective. But the topicality of mass shootings hardly covers for a film with little new to say about or to do with the tale of a man haunted by his demonic alter ego.

The shooting is meant to loom large in the life of the film’s protagonist, Luke, played as a child by Griffin Robert Faulkner and then as an adult (with an atrocious haircut) by Miles Robbins. Wandering out of his home as a young boy, Luke witnesses the aftermath of the shooting, and as he stares at the bullet-ridden body of the perpetrator, a new friend suddenly appears beside him: the slick-haired, stone-faced Daniel (Nathan Chandler Reid). It’s here that the film’s pacing takes a turn toward the peculiar, rushing as it does through Luke and Danie’s friendship and a few very dramatic occurrences before jumping ahead to the former’s adulthood.

As the title of film proclaims, Daniel isn’t real. Luke’s mother, Claire (Mary Stuart Masterson), mentally unstable herself, refers to him as an “imaginary friend,” but as viewers may well guess from the moment Daniel appears on screen, the film suggests that there may be more to him. Repressed for much of Luke’s life—shut away, semi-metaphorically, in Claire’s dollhouse—Daniel reemerges when Luke is in college, now bearing the blandly handsome visage of Patrick Schwarzenegger. Luke has grown into a mopey aspiring photographer beset by his mother’s declining mental health, and his rediscovered ego-ideal represents (like Fight Club’s Tyler Durden) the sturdier, cockier, willfully violent personality he both represses and desires.

The queer subtext here is unmistakable, particularly when Daniel helps Luke cheat on a physics exam by stripping nude to reveal the answers inscribed on his body. Following this line of thought, though, leads to some troubling places, given how simplistically Daniel figures in the film as an evil and pernicious influence on the straight boy that DeLeeuw and Mortimer don’t let us forget that Luke is. They conjure up a female love interest, Cassie (Sasha Lane), to serve as a hinge in the plot, a reason for Luke to reject Daniel’s excessive masculinity. Never much of a character in and of herself, Cassie and her bad-girl foil, Sophie (Hannah Marks), arguably serve largely to defuse the homoerotic tension between Luke and his fantasy man.

In fact, none of the film’s principal figures evince much nuance. When the freshly reawakened Daniel asks what Luke’s photography is about, his “real” counterpart responds, “I’m just trying to connect with people—empathy, I guess.” Neither the screenplay nor Robbins, however, indicate Luke’s desire to branch out to others outside of this apparently genuinely statement: As far as the actual action of Daniel Isn’t Real is concerned, Luke’s only defining characteristic is his struggle with his inner demon. Daniel, too, is a broadly sketched version of an inner demon. Schwarzenegger plays Daniel as a vain Mephistopheles, but the actor convinces neither with his impishness nor with his sense of cool, exuding a forced approximation of villainous charisma that hardly chills one’s bones or even chews the scenery.

Schwarzenegger isn’t aided by a turgid plot that attempts to elevate the peccadilloes of young adulthood to the level of cardinal sins. Daniel is the devil on Luke’s shoulder, either a manifestation of Luke’s inherited tendency toward schizophrenia or an actual demon, often compelling Luke to the make the kind of bad decisions college undergraduates might make anyway. A crucial and extended scene, embellished with the film’s showiest special effects, sees Daniel usurp control of Luke’s body to party, do coke, and have sex with a consenting young woman. Horrifying trespasses, indeed. In the end, the simplistic association of drugs and sex with Daniel’s accompanying penchant for violence and murder betrays a reliance on conventional morality lurking behind the film’s performatively extreme imagery.

Review: I See You Is a Twisty, Atmospheric Look at the Ties that Bind