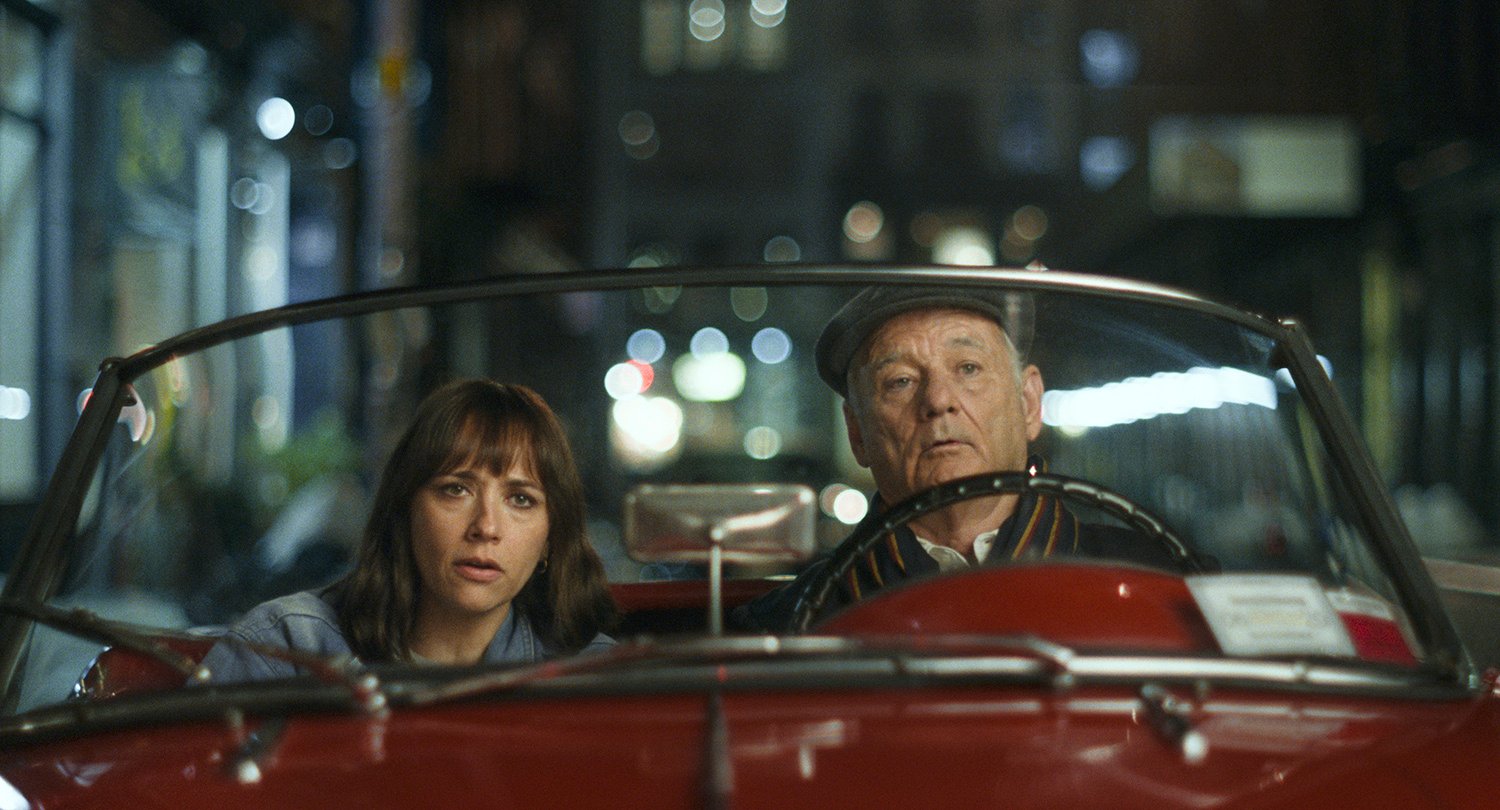 Sofia Coppola’s On the Rocks opens with a series of gestures that establish the film’s entire emotional framework. In a voiceover against a backdrop of darkness, a man tells his daughter—playfully but with an unmistakable edge of seriousness—that she will always be his, even after marriage. We then see Laura (Rashida Jones) and Dean (Marlon Wayans) getting married, and soon descending an elaborate spiral staircase into the cavernous pool of an elegant hotel. Coppola then cuts to Dean already in the water waiting for Laura, who takes the plunge to join him, before then cutting to toys on the floor of a New York City loft—years of marriage compressed into a heartbreaking handful of seconds, as a relationship has evolved from storybook infancy into a romantic partnership that’s enriched by and freighted with obligation, while haunted by an obsessive father’s influence.

Like many Coppola protagonists, Laura and Dean are casually affluent, living in a glass cage of designer parties and restaurants. Yet this is the world that Coppola knows, and her films don’t feign pretense of understanding working-class universality, whatever that may be to begin with. In fact, guilt over this rarefication complicates Laura’s encroaching not-quite-midlife crisis. She feels relentlessly average next to Dean’s chic collaborators, yet she senses that it’s unseemly to feel the pain of the struggling, and such anxieties are embodied by the myopic, comically self-pitying droning of a fellow mom, Vanessa (Jenny Slate). Jones’s body language communicates this anguish vividly, nearly subliminally: Laura is a poignant lump who stands and dresses in order to vanish, coming to see herself only as a supplicant to her children. And she suspects that this behavior might lose Dean’s attention.

In On the Rocks, Coppola utilizes the comic-melancholic tone that she perfected in Somewhere. A shot of Laura lying on her bed, as one of those little robot vacuums buzzes about in hapless circles, instantly evokes Laura’s ennui. And Coppola is particularly adept at expressing the growing confusion between Laura and Dean, who isn’t the cartoon of the inept husband in Lost in Translation but a realistically distracted man too busy to see that he’s ignoring his wife’s needs. One moment is especially strange, even a little dangerous: Dean plops down in the bed in the middle of the night exhausted from work, kissing and touching Laura hungrily until she speaks and ruins the moment, killing the spontaneity of pure sex, the “fucking” that’s referenced in a Chris Rock special that Laura was watching earlier in the night, with the ongoing reality of the work of their relationship. Coppola never over-emphasizes any moments or symbols, particularly a moving motif with wrist watches, cultivating a growing tension that’s intensified by fraught close-ups and passages of pointed silence.

As Laura becomes convinced that Dean is having an affair, her father, Felix (Bill Murray), eases back into her life after returning from a trip to Paris. Rarefied even by Laura’s standards, Felix is an art dealer and womanizing bon vivant who sucks the oxygen out of every room. Felix’s thoughtfulness is somehow selfish, as he showers Laura with the sort of attention that Dean should pay her, except it’s suffocating and vainglorious. He isn’t quite the paralyzed lonely rich man that Murray played in Lost in Translation and Coppola’s 2015 Netflix holiday special A Very Murray Christmas; this character’s loneliness is subtler, hidden under extroversion and revealed fleetingly in startling moments, such as when Felix, feeling a sudden desolation, asks his driver to take him home. There was glamour to Murray’s earlier lost men, who were so quiet that you could project yourself onto them, but Murray renders Felix pathetic even as the character abounds in his distinctively curt and caustic charm.

Laura and Felix work their way through New York, with a side trip to Mexico, in order to find out if Dean is cheating on her—a screwball adventure that Coppola invests with richly unresolved, contradictory undercurrents. Felix has a penchant for absurdist sexism (one of the best bits in the film finds him convinced that he’s growing deaf only to female voices), and he displays undisguised glee at the prospect of proving Dean’s infidelity, which might normalize his cheating on Laura’s mother years ago. Laura might initially be rooting for Dean’s betrayal as well, as it offers a pat answer to her feelings of stagnation.

Their adventure is dotted with lovely curlicues, such as Felix prattling on while recklessly driving a sports car around New York until he’s pulled over by police offers whom he readily charms with his hail-fellow-well-met routine. Coppola, Jones, and Murray capture how such charm is both real and fake, affirming and demoralizing all at once. No wonder Laura feels eclipsed by everyone, including her husband. She was taught early on by Felix to be a spectator, and her latent rage erupts in a moment of reckoning in Mexico.

There are few modern filmmakers who possess Coppola’s gift for capturing how our idealized, movie-fed ideas of “night life” reflect our longing for adventure as well as our loneliness. On the Rocks has the same piercing, hazy, noir-esque beauty as Lost in Translation, Somewhere, and A Very Murray Christmas, as quite a bit of it is set in dimly lit hotels and bars that allow people to be anonymously captivating while getting loose on expensive cocktails.

Sitting across from one another, talking of their own relationship while pretending to speak of Laura’s marriage, Felix and Laura make for an enchantingly odd couple, their energies redolent of a classic movie duo, merged with the despairing yet droll preoccupations of a filmmaker who appears to be cutting to the heart of her own demons. Yet On the Rocks has a bounce—a swing and sense of hopefulness—that’s new to Coppola’s work. As Laura implies, endless passion is exhausting, expected only by the selfish. Somewhere on the sliding scale between combustible heat and resignation is something like grace, where communion is likely.

Review: The Trial of the Chicago 7, While Timely, Exudes Movie-of-the-Week Vibes