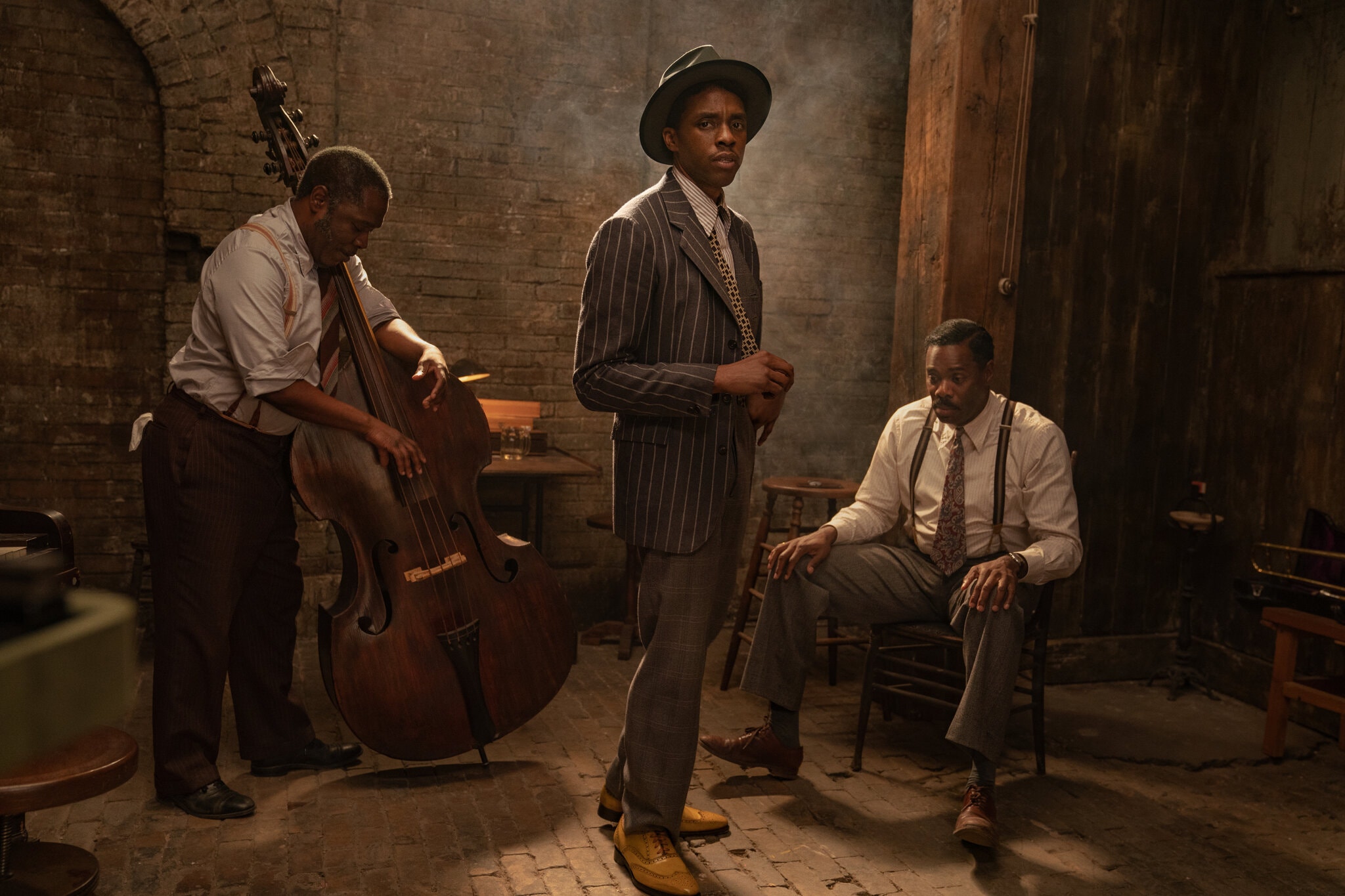 In the canny opening moments of Ma Rainey’s Black Bottom, the camera swoops over the heads of two black men sprinting through the woods at night, tripping over branches in their haste. The sequence, calculatingly staged to evoke an antebellum-era escape, invites our assumptions about who these men might be and from whom or what they might be running, but it turns out that the two men are just music fans on the move to catch a concert performance by Gertrude “Ma” Rainey, the Southern singer dubbed “Mother of the Blues.”

It’s a pain-to-pleasure illusion that runs in reverse throughout the rest of George C. Wolfe’s film, which has been thoughtfully, gently adapted by Ruben Santiago-Hudson from August Wilson’s 1984 play. Though Ma Rainey (Viola Davis), here a fictionalized version of the real-life pioneering recording artist, may command sell-out crowds and booming record sales, she also knows what she ultimately represents for the white managers and producers who profit from her talent: “They don’t care nothing about me,” she explains early in the film. “All they want is my voice.” Ma Rainey’s Black Bottom chips away at the seeming triumph of a celebrated chanteuse to reveal the bitter truths below the surface.

Ma Rainey, gilded and painted, is playing a part. With gold teeth and coarse coats of makeup highlighting a face often frozen in a withering sneer, most often directed at the white men who pay her but sometimes at the rogue trumpeter in her band, Levee (Chadwick Boseman), or at her chorus-girl lover, Dussie Mae (Taylour Paige), she’s miles away from vulnerability.

Ma Rainey’s Black Bottom takes place over the course of a few hours in the recording studio where Ma presides over her deferential manager, Irvin (Jeremy Shamos), disgruntled producer, Sturdyvant (Jonny Coyne), and her four-man band, which, in addition to Boseman’s Levee, includes Toledo (Glynn Turman) on piano, Slow Drag (Michael Potts) on bass, and Cutler (Colman Domingo) on trombone. For Ma Rainey, as long as the microphones are on, she has total power, and she relishes in elongating that reign through the power of refusal: she won’t sing until she has her Coke; she won’t move on until her nephew, Sylvester (Dusan Brown), who stutters, perfectly delivers the introduction to the recording; and she won’t sign the release form that would liberate her white manager and producer from her say-so.

Davis, coarsely, tauntingly, slowly slurping on that Coca-Cola, communicates Ma Rainey’s premeditated defiance: As long as she controls the recording session, she rules over the white men who crave her sound, her strength and talent arising not in spite of her black body, but through it. And if that simultaneous tribute to, and desecration of, her artistry is ultimately heartbreaking to her, Ma Rainey isn’t about to let them see through her armor.

For the rest of the band, though, things are different. Levee has visions of forming his own band, of getting his original songs recorded, of winning over Ma Rainey’s beloved Dussie Mae. His jaded bandmates have seen it all by now, though, and they know Levee’s cocksure dreams will backfire. What they cannot anticipate are the frightening ways in which Levee’s grief has already hardened into powder kegs. If Ma finds small, sustaining triumph in refusal, Levee leans heavily on the blinding comforts of denial, and Boseman offers a deliriously frantic performance of contradictory extremes that eclipses the rest of the film when he’s at his most urgent and sweltering. Of the other bandmates, it’s Turman’s Toledo who most memorably emerges from Levee’s shadow: He’s the oldest of the musicians and the clearest-eyed in his surety that the rewards of individual artistic glory, the kind that Ma embraces and Levee pursues, will make scant difference in improving black lives in lasting ways.

Wolfe, best known as the razor-witted playwright of The Colored Museum and the original director of Angels in America, takes a hands-on approach in sending sparks of activity through the film’s claustrophobic spaces. In the small basement room where the band practices as they await Ma Rainey’s arrival, the camera often ricochets from man to man, as frenetic as the film’s briefer depiction of the Chicago streets above. Successful in the early scenes at animating what could otherwise feel static on screen, that perpetual motion may also somewhat undercut the boiling stillness that eventually erupts. Wilson’s trademark undercurrent of simmering rage against the divine—the same desperate resistance that distinguishes the climaxes of plays like Fences and The Piano Lesson—only sneaks in occasionally, and, when Levee’s restless hopelessness explodes into destructive action, it neither feels wrenchingly inevitable nor cathartically shocking.

That’s not through any fault of Boseman’s. Indeed, though Davis’ gritty, authoritarian presence at the mic complexingly layers the seductive highs of stardom and the exhausting veneer of Ma Rainey’s temporary, performative power, it’s Boseman who most movingly gives voice to the ghosts that haunt Wilson’s play. In his final role, Boseman meticulously charts the breakdown of a man discovering, within the mirages of 1920s blackness, that pursuit and escape, fleeing from and running toward, are inextricably intertwined.

Review: Happiest Season Is Paint-by-Numbers but Earns Its Emotional Payoff