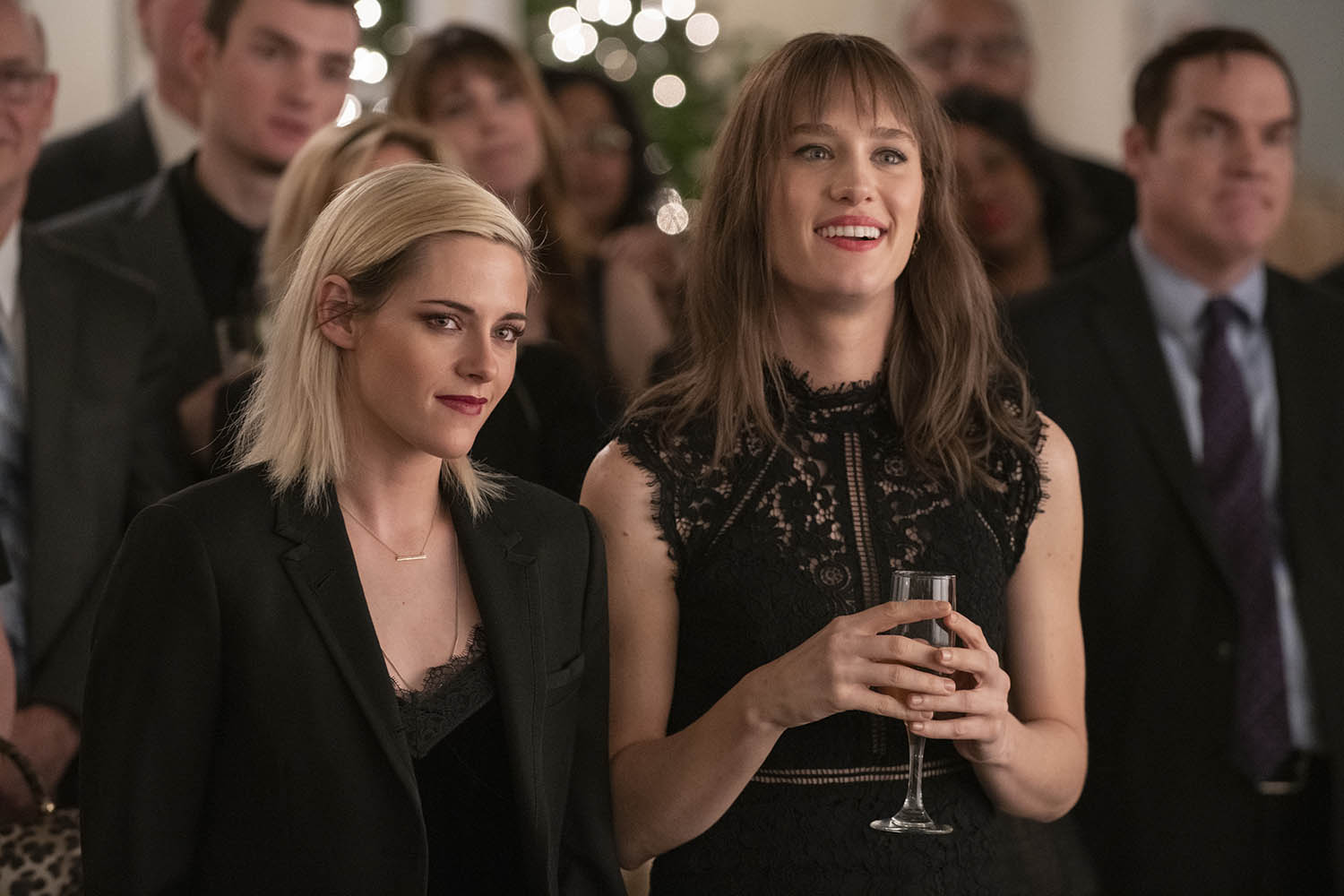 Clea DuVall’s Happiest Season isn’t a radical holiday movie. Indeed, from a certain, say, militant queer-feminist perspective, it might be considered a counterrevolutionary one. Early on, it asserts its comfort with outdated notions of coupledom that are peddled by the average romantic comedy when Abby (Kristen Stewart) tells her friend John (Dan Levy) that she’s planning to propose to her girlfriend, Harper (Mackenzie Davis), on Christmas morning. Abbey reveals not only this affront to John’s anti-heteronormative inclinations, but that she’s going to first ask for the blessing of Harper’s father, Ted (Victor Garber). “Way to stick it to the patriarchy, really well done,” John archly replies.

The rest of the film, like Abby, proves eager to mimic the innumerable non-gay Christmas movies that preceded it, trotting out the quirky family, the handsome hometown ex-boyfriend, the misunderstood suitor, the betrayal that must be rectified, and the final holiday moral—namely, that family is important. The plot of Happiest Season is best summed up, in short, as “gay Meet the Parents.” But this assimilationist bent certainly doesn’t stop Duvall’s film, which is stacked with a supporting cast of solid comic performers like Levy, from sharpening humor that surely seemed mild on the page. It’s even much more affecting than most of its heteronormative predecessors, in large part because the stakes of its comedy of errors are greater than whether or not one man “lets” another man into the family.

Abby and Harper begin Happiest Season as a blissfully happy couple, still young and in love enough to risk trouble with stunts like sneaking onto a stranger’s roof to gaze at neighborhood Christmas lights, and, when they’re chased away, pausing their flight to make out in an alley—a clean alley, though, as they live in post-gentrification Pittsburgh. In the heat of the moment, Harper invites Abby, whose family died tragically some years ago, to come home with her for Christmas. It’s only when they’re on the road that Harper finally brings herself to confess that she’s lied to Abby about being out to her parents; that her family believes Abby is her (straight) roommate; and that she told them that she invited Abby along because she’s an orphan.

Harper, it turns out, is the favorite daughter of an important local family whose priorities are dominated by her mild-mannered but ambitious father, the very embodiment of soft patriarchy. Ted’s running for mayor, and Harper can’t risk causing a scandal in her small Pennsylvania town by coming out in the middle of his campaign. We’ll learn that, in addition, favorite-child Harper also has to maintain her edge in her lifelong competition with her humorless, extremely hetero older sister, Sloane (Alison Brie). With these characters’ gazes fixed on Harper’s strange new roommate, the masquerade that Abby’s forced into grows increasingly difficult—particularly as Harper’s first love, Riley (Aubrey Plaza), appears on the scene and lends Abby both a sympathetic ear and surprising insights into Harper’s past.

There’s a delicate balance between comedy and distress that the films needs to strike in relation to Harper’s multilayered betrayal, because the scenario pulls double duty: It’s amusing when her oblivious, bougie family keeps treating Abby like a refugee from a Victorian orphanage, but wrenching when Abby must watch her would-be fiancée flirt with her old boyfriend, Connor (Jake McDorman), to keep up appearances. Sometimes, DuVall doesn’t quite find this balance, and what’s meant as frivolous comedy elicits anxiety. At times it’s more intuitive to be feel distressed by Abby’s plight—like when she’s arrested by overzealous mall cops (Timothy Simons and Lauren Lapkus) because she’s mistaken as a shoplifter after Harper ditches her to hobnob with Ted’s campaign donors—than amused by it.

But then, it’s remarkable that a film that’s in so many ways a paint-by-numbers romantic comedy actually delivers to much emotional heft. If by Happiest Season’s midway point it’s easy to write off Harper as too privileged and selfish to be truly worth all this trouble, Stewart makes Abby’s decision not to immediately split believable by leaning into her wallflower persona, communicating silent heartbreak and confusion on the margins of her character’s jittery, awkward interactions with the denizens of Squaresville, PA. It might be going too far to call DuVall’s film groundbreaking, but like the best rom-coms, it smuggles a few nuggets of truth into its predictable formula, translating the often difficult realities of a specific kind of marginalized love into a story with broad appeal.