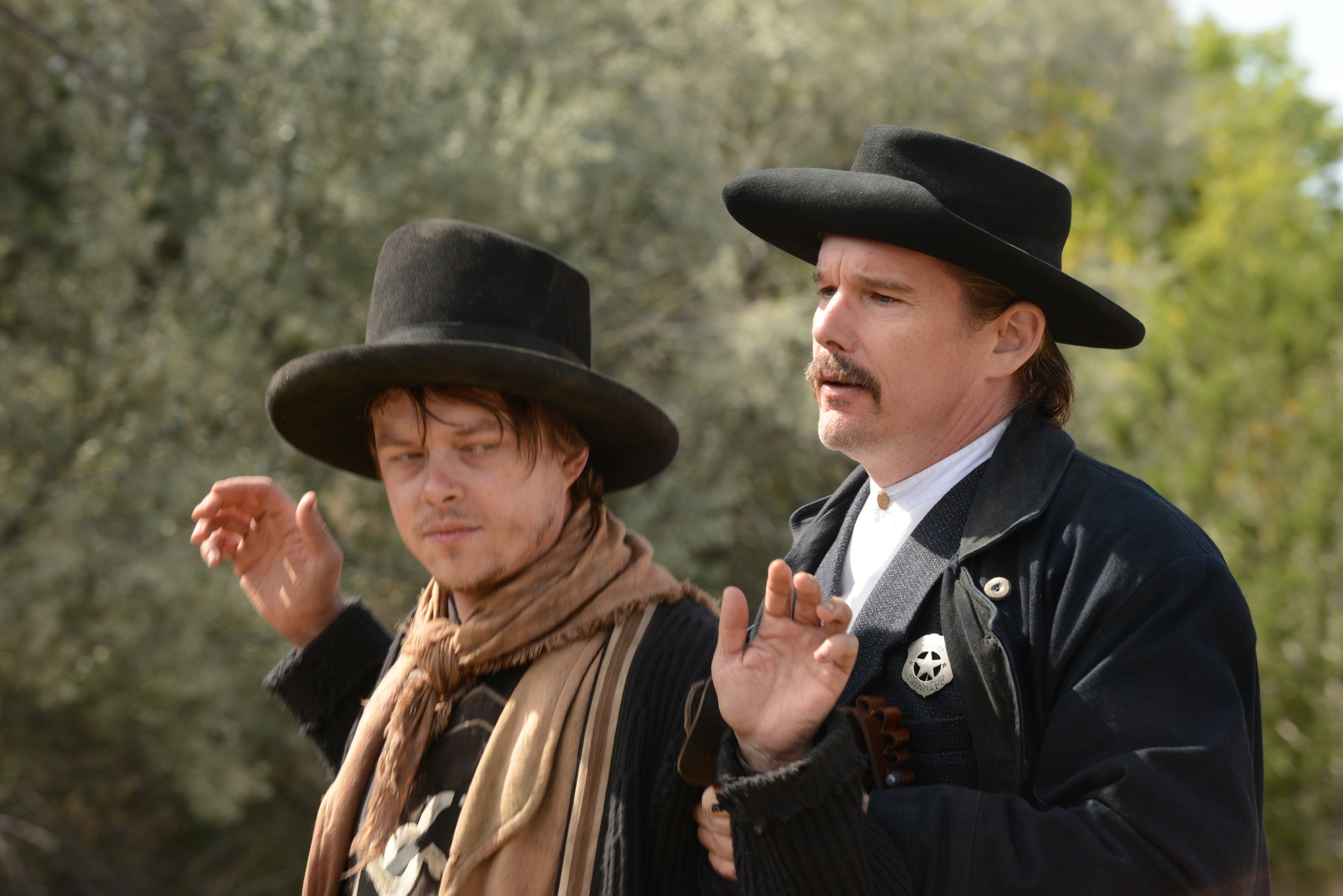 The characters in Vincent D’Onofrio’s The Kid never just converse with one another. They shout and scream, deliver long-winded monologues, glower at each other, and occasionally drop faux-meaningful pearls of wisdom like, “It doesn’t matter what’s true. It matters the story they tell when you’re gone.” An overheated riff on the legend of Pat Garrett and Billy the Kid, the film is little more than a procession of shouty—not to mention shoot-y—confrontations between grizzled, morally compromised men.

Caught in the middle of all this violence is Rio (Jake Schur), a doe-eyed young boy who slays his father after witnessing him beat his mother to death, thereby incurring the wrath of his villainous uncle, Grant Cutler (Chris Pratt). Rio and his sister (Leila George) go on the lam, running into the notorious outlaw William Bonney (Dane DeHaan), and just in time to see him get picked up by grouchy, self-serious lawman Pat Garrett (Ethan Hawke).

D’Onofrio’s film attempts to position Pat and Billy as moral opposites. Will Rio follow the straight and narrow path of the sheriff, or will he succumb to the alluring amorality of the outlaw? The choice is a potentially tantalizing one, but Andrew Lanham’s screenplay is too muddled to draw out this quandary with any clarity. The Kid is at once too heavy-handed in establishing the parallel between Pat and Billy—having each one tell Rio detailed stories about the first time they ever killed a man—and too confused about what exact distinction between these two men it wants to draw. Pat may solemnly intone that “a man’s wrongs matter,” and Billy may recount his many sordid past deeds with an unrepentant yellow-toothed grin on his face, but the filmmakers never make us understand their worldviews.

That’s no fault of Hawke, who brings a solemn gruffness to Pat, or of DeHaan, who infuses Billy with a certain slimy charm. Nor can you blame Matthew J. Lloyd, whose shadowy, Deakins-esque images infuse The Kid with a rich ambiguity. Rather, the problem lies with D’Onofrio’s over-reaching direction, which attempts to turn every scene into a fiery, intense battle of wills. He never lets his actors breathe or allows the narrative to develop naturally.

There’s no sense of pace or rhythm to the film’s plot; its scenes wildly escalate to a fever pitch at the drop of a hat, before then ending, more often than not, with abrupt violence. Instead of taking the time to develop Pat, Billy, and Rio, D’Onofrio constantly resorts to brutal, fire-and-brimstone theatrics. The result is a cluttered, clunky take on a well-worn western myth, one that’s more interested in howling at its audience than in telling it a story.

Review: Gloria Bell Could Have Been an Expectation-Ducking Comedy