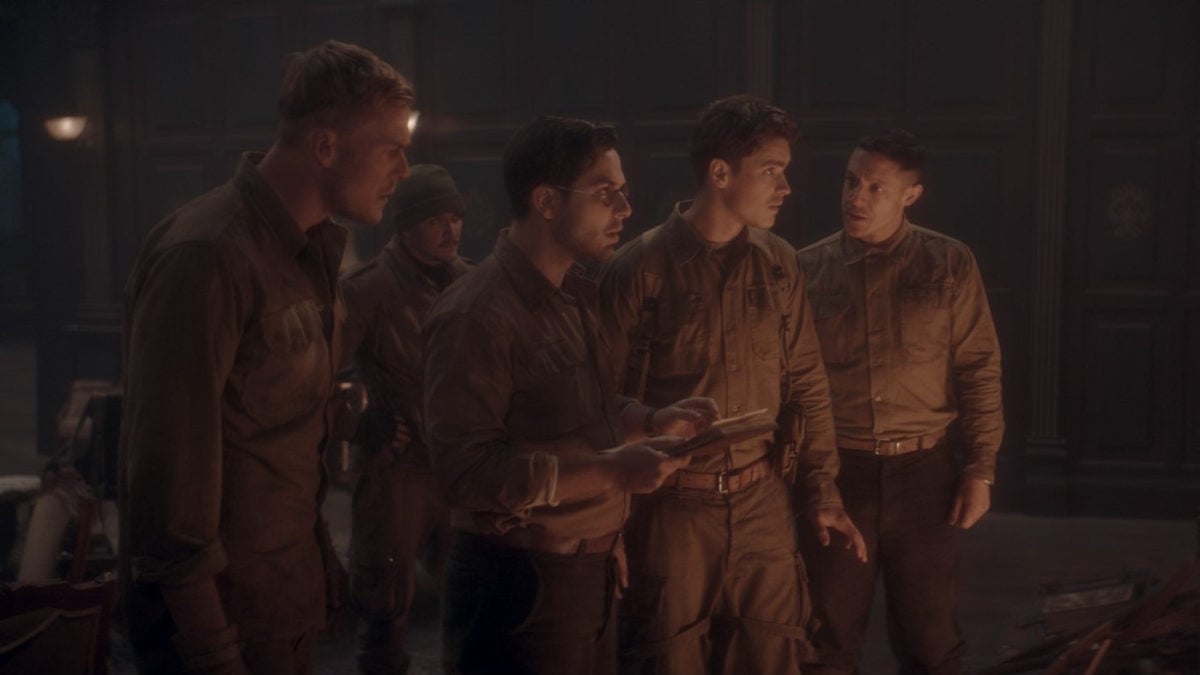 As a horror film that deals in hauntings and temporal displacements, writer-director Eric Bress’s Ghosts of War almost feels aptly dislodged in time. It could easily have come out two decades ago, around the time of Bress’s own The Butterfly Effect—that post-Sixth Sense era when suspense films seemed almost obligated to reveal their structuring conceit in a last-minute twist. Ghosts of War harkens back to this era of “gotcha” thrillers, building toward a climax in which significant moments we’ve seen are played back to us in rapid montage so we can piece together the supposedly clever ways we’ve been misdirected.

The device of the explanatory twist appears here as an apparent means of papering over some rather glaring inconsistencies in the World War II-set horror story, anachronisms and abrupt tone shifts whose gradual accumulation results in more incoherence than mystery—like when we catch sight of gaunt refugees in striped concentration-camp garb in Eastern France in 1944, or when a scene ends with a character’s fingers being horribly mangled, and the next opens with the same character coolly discussing scrambled radio messages. The big reveal assembles some of these disjointed pieces into a conspiratorial whole that, conveniently, could account for almost any preceding logical lapse. But some oddities can only be explained as continuity errors, like when the characters suddenly have wounds they will receive in a later scene.

The story that’s doomed to be consumed by its own ending concerns five Army grunts assigned to set up camp in a chateau in the French countryside just outside of Strasbourg, relieving another fireteam whose members, when our heroes arrive, wear the sleep-deprived and nerve-wracked faces of men who’ve spent several nights in a haunted house. Left with a radio that’s quite plainly relaying scrambled eldritch whispers from the beyond, a room decorated with creepy porcelain dolls, and a journal kept by the Nazi commanders who used the chateau as a headquarters, the five soldiers might be able to read these signs and guess they’re in for a modern movie haunting, if only they’d been born a few decades later.

One of the soldiers, Eugene (Skylar Astin), whose spectacles and aversion to combat peg him as the group’s intellectual, speaks German, so he begins reading the Nazis’s detailed account of their torture and murder of the family who lived in the house. The spirits of the Hellwigs still haunt the mansion, which we learn through the soldiers’ spooky encounters, which often resemble gags at Disney’s Haunted Mansion attraction: the silhouette behind a curtain that disappears when the cloth flutters; footprints that form in the sand before our eyes; and the family photo from which the human subjects disappear, leaving behind empty furniture.

Starting on the basis of these hokey effects, Bress’s screenplay takes up and then immediately drops several distinct threads of development. The old hobbyhorse of Hitler’s interest in the occult is dusted off, ridden around for 10 minutes, then forgotten. Suspicion between the soldiers wanes as soon as it waxes: For about three minutes, Chris (Brenton Thwaits) suspects Eugene of knowing more than he lets on, and everyone briefly suspects Tappert (Kyle Gallner) of harboring some violent intentions or other. There’s little sense that all this is going anywhere, and, of course, the twist ending will render much of it meaningless. At one point, the team tries to leave the mansion, and finds that they’re caught in some kind of spatio-temporal loop. They never feel more relatable than they do in this moment.

Noteworthy in Ghosts of War is that the Nazis aren’t the vicious paranormal force threatening the lives of our boys in uniform, but rather their victims. It’s a distinctive choice that initially suggests the film may intend to use the conventions of the ghost story to talk about something like the lasting spiritual impact of mass conflict and murder. But in a move that ends up being as morally ghastly as it is intellectually flabbergasting, the conclusion entails drawing a direct parallel between persecuted Jews hiding from Nazi slaughter and armed American soldiers hiding from enemy discovery. Perhaps the sloppy jingoism of a Nazi horror movie shouldn’t rankle so much, but Ghosts of War delivers its simultaneous celebration and exploitation of America’s “good wars” with an unreflective earnestness that’s haunting in all the wrong ways.

Review: Blessed Child Only Half-Lifts the Veil on a Family’s Ties to a Cult

Interview: Bill and Turner Ross on the Constructions of Bloody Nose, Empty Pockets