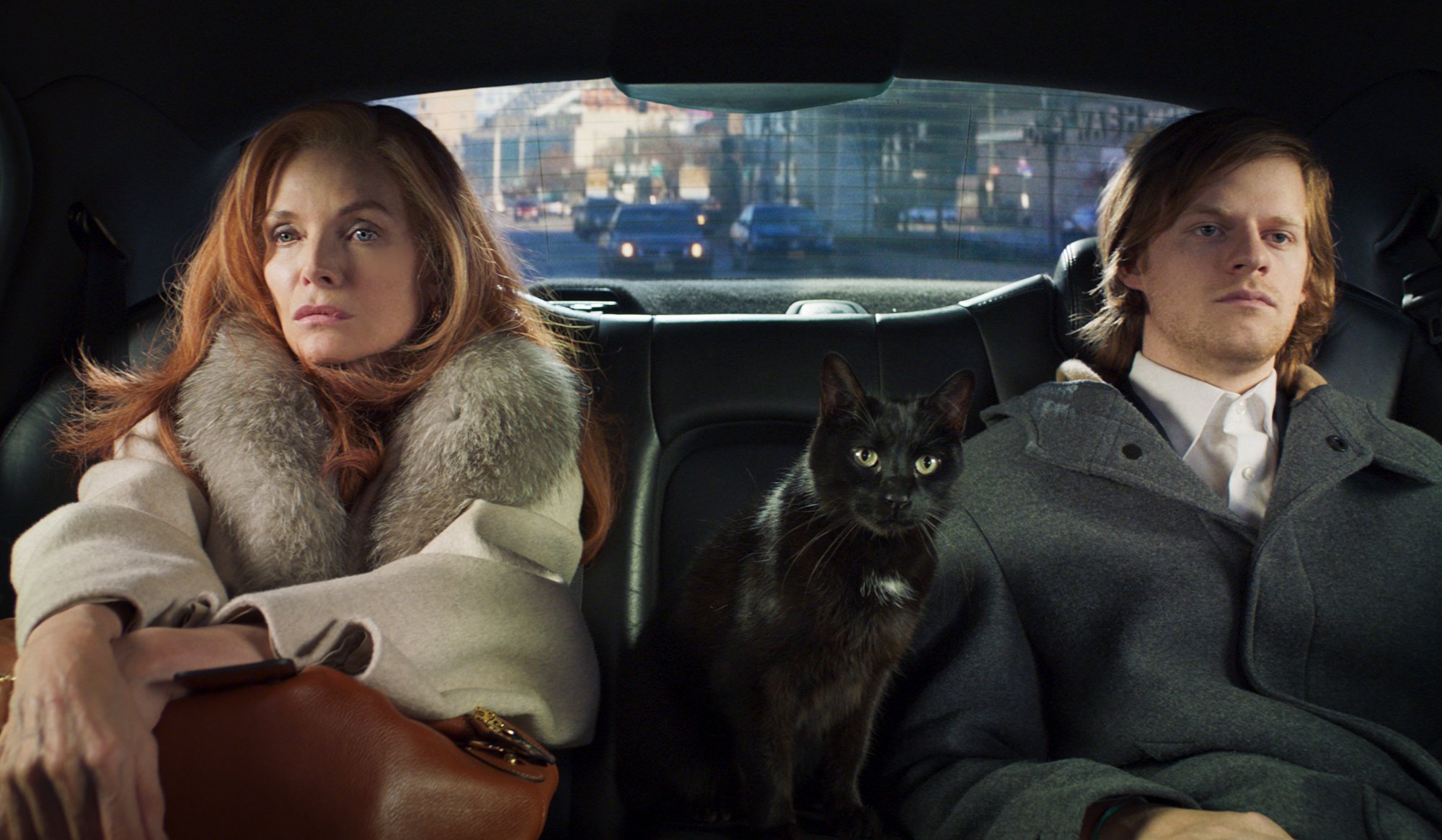 Like Sofia Coppola’s On the Rocks, Azazel Jacobs’s French Exit suggests a 1930s-era screwball comedy that’s been informed by a contemporary class consciousness. Both films are set in dreamy, rarefied realms in which posh characters quietly rue their encroaching irrelevancy—and Coppola and Jacobs, who both hail from privileged artistic families, are at once empathetic and critical of their heroes, who’re given to glorious artistic flights of fancy that are nevertheless understood to be rooted in tunnel vision and selfishness.

In French Exit’s first act, Jacobs and screenwriter Patrick DeWiit, adapting his own novel, come as close to capturing the tone of the screwball comedy as any modern filmmaker has, understanding that the genre is driven by an oxymoronic kind of sentimental amorality. Frances (Michelle Pfeiffer) is a haughty, aging socialite who speaks with a deliciously barbed tongue, wearing her snobbishness and obvious loneliness and misery as badges of honor. She’s a kook in the mold of a Preston Sturges character, with a dash of Charles Dickens and John Kennedy Toole, and Pfeiffer delivers her bon mots with a fine-edged precision that’s likeable for its commitment to unlikability. Like Bill Murray’s character in On the Rocks, Frances is charismatic at the expense of her child, Malcolm (Lucas Hedges), whose solemn, self-effacing, fiercely committed devotion to Frances also recalls, weirdly, the relationship between Gloria Swanson and Erich von Stroheim’s characters in Sunset Boulevard.

French Exit, though, doesn’t have the doomy neuroses of the Billy Wilder classic. Jacobs’s film is an airer affair, with Frances and Malcom offered up as insular yet benevolent outcasts who need to find a way to connect with other people—a schematic that’s evident from the start but doesn’t overtake French Exit until its second half. Jacobs initially conjures an atmosphere of pointed, delightful, melancholic randomness that’s generally unburdened by plot arcs. In the tradition of many cinematic socialites, Frances has piddled her wealth away, requiring an adventure to rediscover herself: She sells most of her belongings and moves with Malcom to Paris to live in a flat belonging to a prosperous friend, Joan (Susan Coyne).

This quest is rich with wonderful details. On Frances and Malcolm’s transatlantic cruise to Europe, Malcolm befriends a clairvoyant, Madeleine (Danielle Macdonald), who has a habit of telling her rich and elderly clients when they’re going to die—a puckish, morbid joke that parodies wealthy entitlement while paralleling Frances’s escalating fears of poverty and death. Madeleine also claims to be able to speak to the family cat, Little Frank, who’s named after Frances’s deceased husband and who’s a beautiful black feline with a way of quietly stealing scenes, his lounging offering the plutonic visual equivalent of the mother and son’s malaise.

Throughout this stretch of French Exit, scenes keep popping up and surprising you. When Frances and Malcolm settle into their new life in Paris, they’re invited to a party by someone once tangentially associated with Frank, Mme. Reynard (Valerie Mahaffey), who suggests the loon that Frances might’ve become without Malcolm in the picture. Reynard doesn’t guard herself like the mother and son duo, confessing to her loneliness and vulnerability directly and emanating a flakey off-kilter energy that’s amusing and quite poignant.

In French Exit’s best passages, sadness and curt, resonant comedy exist side by side unceremoniously, sans speechifying. We’re led to assume that Frances and Malcolm will continue a series of semi-related adventures until we’re eventually required to leave their company. French Exit drones on, however, growing cuter and more obvious, with Frances and Malcolm collecting a variety of eccentrics who’re defined only by their mildness and disappointment with themselves. This sentimentality particularly betrays the fire and steel of Pfeiffer’s performance: One scene of Frances showing a homeless man kindness is lovely, while two such moments pointlessly and obviously stack the deck in the character’s favor. And it’s a shame to reduce Frances and Malcolm to people with the usual husband and daddy issues, even if such revelations are laced with unexpected whimsicality. Great screwball comedies never sacrificed style for pathos, as they understood these elements to be one and the same.

Review: Totally Under Control Is a Damning Summation of Trump’s Covid Failures