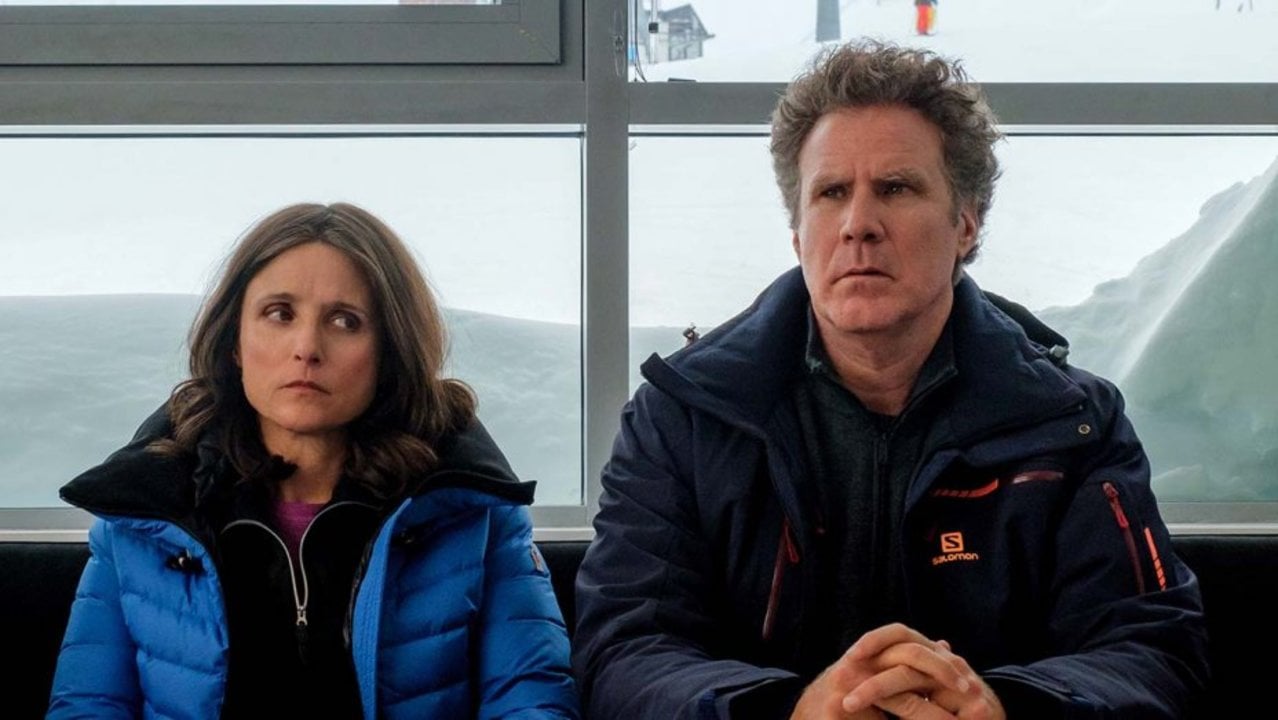 Ruben Östlund’s 2014 film Force Majeure brims with precisely calibrated depictions of human misery—shots that capture, with a mordant, uncompromising eye, the fragility of contemporary masculinity and the bitter resentments underlying the veneer of domestic contentment. The observations it makes about male cowardice and the stultifying effects of marriage aren’t exactly new, but Östlund lends them an indelibly discomfiting vigor through his rigorous yet playful compositions. Given the clarity of that vision, it probably goes without saying that Nat Faxon and Jim Rash’s Downhill, an Americanized remake of Östlund’s film, faced an uphill battle to not seem like an act of redundancy.

Downhill not only borrows the basic outlines of Force Majeure’s plot, but also attempts to mimic its icily cynical sense of humor. The result is a pale imitation of the real thing that never builds an identity of its own. Like its predecessor, Downhill tracks the fallout from a single catastrophically gutless moment, in which Pete (Will Ferrell), the patriarch of an upper-class American family on a ski holiday in the Alps, runs away from an oncoming avalanche, leaving his wife, Billie (Julia Louis-Dreyfus), and two sons, Finn and Emerson (Julian Grey and Ammon Jacob Ford), behind—though not before grabbing his phone.

This scene, which Östlund covers in a single indelible long take in Force Majeure, is broken up here into a conventional series of shots. It’s reasonably well-constructed, and it effectively sets up the chain of events that follow, but perhaps inevitably, it doesn’t carry the same weight. And the same is true of so much of Downhill as it moves from one mildly amusing cringe-comedy set piece to the next, never making much of an impact.

Comedy of discomfort usually depends on the willingness to linger on an awkward moment, to make it impossible for us to shake off that discomfort. But Faxon, Rash, and co-screenwriter Jesse Armstrong lack the courage of their convictions. They craft some truly cringe-inducing scenarios, such as an explosive debate between Pete and Billie as they attempt to convince a couple of friends, Rosie and Zach (Zoe Chao and Zach Woods), whose version of events about the avalanche is correct. But they don’t give us enough time or space to soak in the uneasy atmosphere. During the debate, for example, Billie rouses Finn and Emerson and has them testify before Rosie and Zach that her memory is correct. But almost as soon as the sheer inappropriateness of the decision to bring her kids into the center of a brutal marital dispute hits us, the moment has passed, and the film has moved on to the next gag.

It’s hard not to feel like Faxon and Rash are pulling their punches, perhaps anxious that going a little too dark or getting a bit too uncomfortable might upset the delicate sensitivities of an American audience. Rather than really dig into the marital strife at the heart of the film’s premise, they’re mostly content to step back and let Ferrell and Louis-Dreyfus do their thing. And the two actors bounce off each other with a pleasantly nervous energy, Ferrell’s clammy desperation so well contraposed to Louis-Dreyfus’s rubber-faced emoting.

Ferrell plays Pete as a man terrified of his own feelings, unable to reveal his deep insecurities to anyone, including himself. Louis-Dreyfus, on the other hand, wears every emotion, however fleeting, right on her face, which is in a state of constant flux. Throughout Downhill, Billie’s emotions range from unease to anger to self-doubt to pity, often in the span of seconds. More than anything else, it’s Louis-Dreyfus’s performance that sticks with you after the film is over.

If Force Majeure was essentially a film about male cowardice, Downhill is in many ways about the lies women must tell themselves to remain sane in a man’s world. It’s apt, then, that one of the pivotal images in Östlund’s film is that of the husband’s pathetically weeping face as he breaks down in a fit of self-loathing in front of his wife, and that the most lasting image in this remake is the look of shock, confusion, and rage on Billie’s face as Pete tells her the same. Unfortunately, it’s one of the few truly striking and meaningful images in the entire film.

Review: Onur Tukel’s The Misogynists Stagily Addresses the State of a Nation

Wes Anderson’s The French Dispatch, a Tribute to Journalists, Gets First Trailer