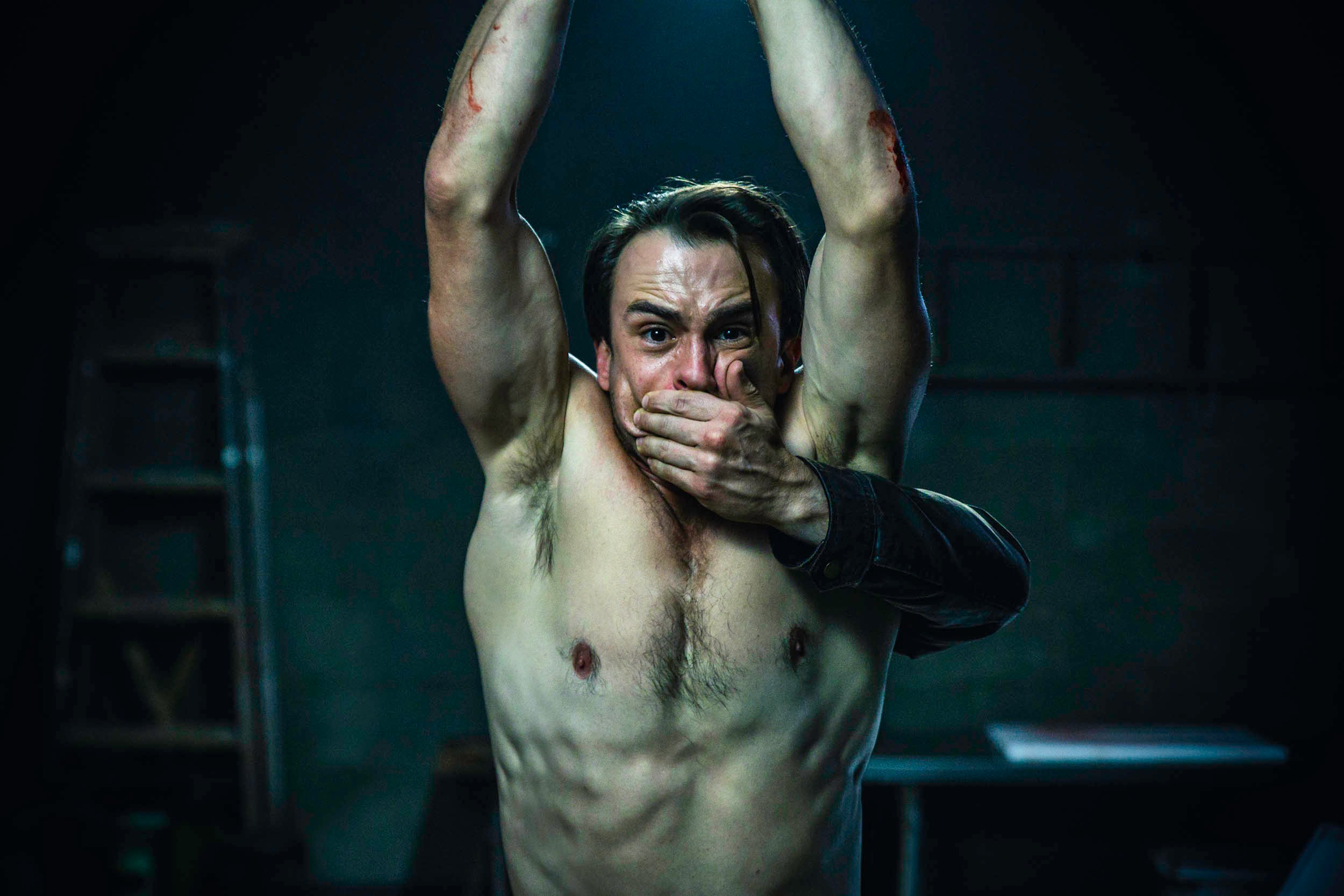 Alister Grierson’s Bloody Hell is surprisingly brisk for much of its running time considering that its protagonist, Rex (Ben O’Toole), spends over half of the film tied up in the basement of a demented family’s home outside of Helsinki. The film bears many of the hallmarks of the exploitation picture, and Grierson wrings a good deal of twisted humor and white-knuckle tension from Rex’s kidnapping and subsequent torture, in no small part thanks to the charismatic O’Toole’s performance. Whether through Rex’s increasingly absurd and violent encounters with his captors or his spirited back-and-forth with the physical embodiment of his inner consciousness, the film makes plenty of room for O’Toole, recalling a young Robert Downey Jr., to show off his comic timing and physical prowess as an over-the-top vigilante who’s compared by other characters to both John Wick and Jason Bourne.

Bloody Hell opens in Boise, Idaho, where Rex, a military vet with a perpetual itch to scratch, waits in line at a bank, eagerly waiting to chat up a teller, Maddy (Ashlee Lollback), who we’re led to believe he may already be dating. But his chance at flirting with her is thwarted when a group of robbers arrive on the scene and Rex, with encouragement from his cocksure inner self, leaps into action and saves the day. He becomes an instant folk hero but lands in jail for eight years—and for reasons that aren’t fully revealed until late in the film.

The kinetic action and bawdy humor of the opening bank robbery establishes the tone of Bloody Hell, as well as Rex’s uncanny ability to take out baddies, which inevitably colors our perception of his quandary after he travels to Finland as a means of slipping into total anonymity, only to find himself roped up in a basement with the lower part of one of his legs missing. And the film is at its best when it simply fixates on Rex’s primal need for survival, slowly revealing the depths of his kidnappers’ depravity and our hero’s psychological tumult without ever abandoning its irreverently comical take on his horrifying situation.

Sadly, Bloody Hell insists on returning, over and over, to the bank robbery via flashback, leaning on exposition and needlessly fleshing out how Rex has weathered romantic disappointment. While this thread eventually plays into his befriending of Alia (Meg Fraser), the one offspring of the Finnish family who isn’t totally insane, it’s quite a long walk for such paltry returns. In constantly cutting away from Rex’s tense, gut-wrenching plight, the film becomes so convoluted that its manic blend of gore and cheeky comedy is diluted. Which is to say that Bloody Hell, in the end, is less grindhouse cinema than grind.

Review: Hunted Gets Stuck in a Holding Pattern As It Riffs on Fairy Tale Tropes