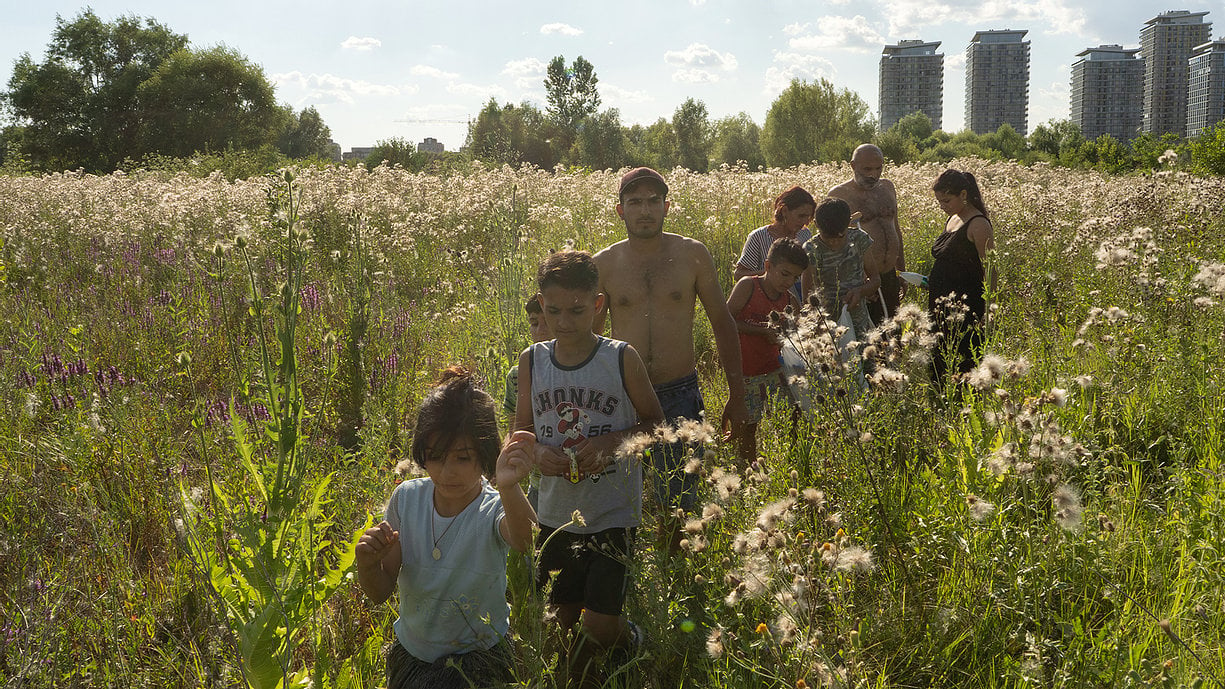 Radu Ciorniciuc’s Acasa, My Home observes the day-to-day life of the Enache family—father Gică, mother Niculina, and their nine children—who have lived in a hut next to an abandoned reservoir just outside of Bucharest for the better part of two decades. Theirs is a world of symbiosis with nature. Removed from modernity, they have little concept of an inside. They catch fish by hand, while other animals serve as pets, playthings, sometimes even the casual targets of spilt-over domestic violence. There’s a clear sense here that the arrangement stems from the patriarch knowing that to engage with “the city” at all is to be wounded by it, but also from his wish to control his children. For one, Gică refuses to let them go to school, at one point throwing a book that would teach them how to read, and as such help them to transition into another existence, straight into the fireplace.

A similar logic of perverse parental authority is at work in Yorgos Lanthimos’s Dogtooth. Except that in that Greek Weird Wave masterpiece it’s the world outside that’s robbed from children, as they never get to leave their fenced-in country compound. And if the intensity of parent-child love isn’t exactly on Dogtooth’s mind, it abounds in Ciorniciuc’s documentary, as both Gică and Niculina’s affection for their kids and each other is palpable throughout, as in the hide-and-seek games they find themselves playing with child services early on.

Child services workers, though, aren’t the only ones that bother the Enaches. Authorities constantly show up to tell them off for poaching, burning garbage, and illegally planting willows—reminders to Gică, no doubt, of why he retreated from society in the first place. Eventually, their refuge becomes untenable, which helps drive Ciorniciuc’s observational style into more narratively driven terrain: When the massive patch of land that serves as the family’s habitat is designated as an urban wildlife reserve (at one point, Prince Charles gets the ball rolling on the project with a ceremonial shovel), they’re forced to relocate.

Placed in government housing, the family is greeted by a landlady who tells them that she isn’t racist, only for her subsequent words to prove otherwise, while their neighbors treat them as nuisances. “Go stay with the gypsies by the lake,” says the old man across the way as he walks to his car. Though the children are initially giddy about having actual rooms and impressed by the inner workings of a washing machine, the family unity quickly crumbles. Gică falls literally ill from losing his children to the world: its schools, buses, public squares, cellphones. A sort of ancestral yearning to go back to the park and build another hut consumes him, but the family bonds have been severed and his desires can only take shape as a gloomy nostalgia.

It’s at this point that the 17-year-old Vali, the oldest son, starts resenting his father for having isolated the children from the rest of the world for so long. One of the most moving aspects of Acasa, My Home is watching the younger children’s faces react, like fully invested but ultimately impotent spectators, to the quarrels they witness. Especially poignant is the sight of Rica, slightly younger than Vali, expressing his own wish to return to the shack, taking his older brother to task for moving in with his girlfriend and abandoning the family.

Rica misses his closeness with nature, the quietness of his old home, where the raucousness that characterized the family’s life there was of their own making, not that of a city constantly demanding something of them that they cannot give. “It’s like a prison. Are we supposed to eat concrete?” Rica says in tears. A much younger sibling stares at his crying brother, eventually finding the words to heartbreakingly say that before they had to share their lives with strangers, when the family was the entirety of the world, “even the food tasted better.”

Review: The Mauritanian Relates Story of U.S. Torture with an Impersonal Touch