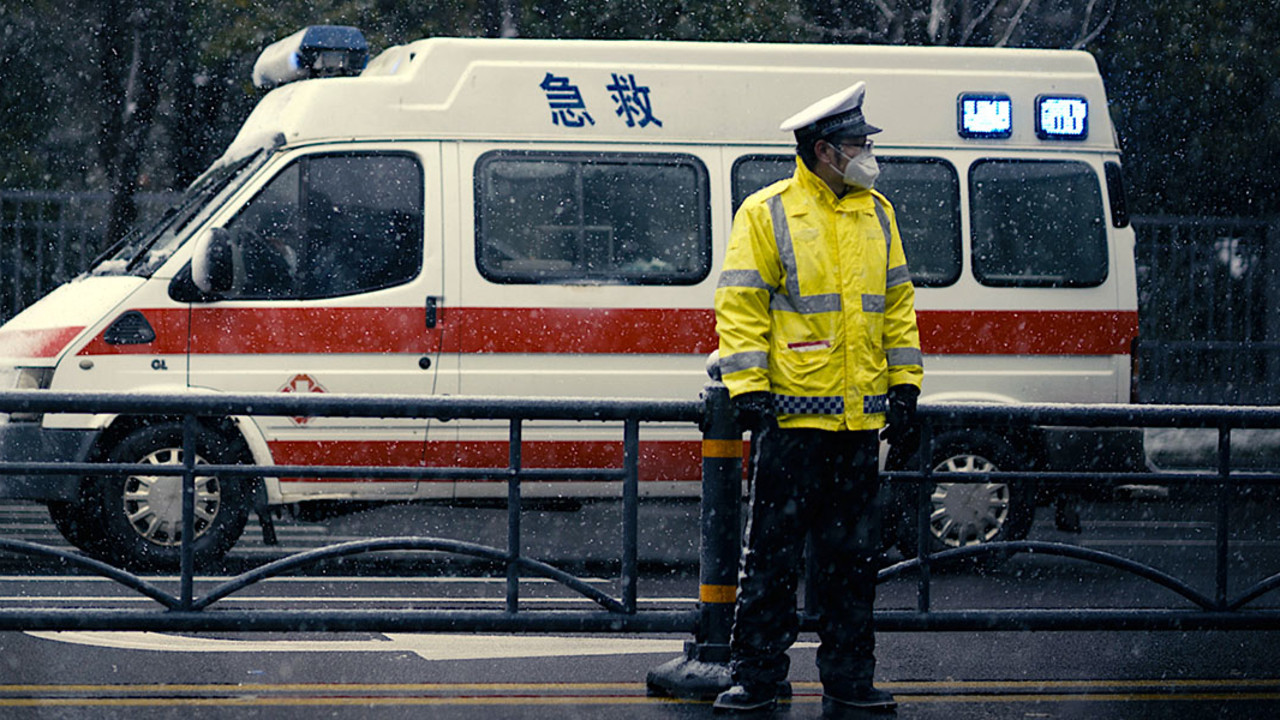 Like Ai Weiwei’s Coronation, Hao Wu and Wiexi Chen’s 76 Days—co-directed by another journalist who chose to remain anonymous—documents the early days of the Coronavirus outbreak in Wuhan, China. While Ai’s film manages to slip a number of pointed critiques of China’s authoritarian tactics passed the country’s typically hawk-eyed censors, 76 Days, which takes its title from the length of Wuhan’s lockdown early in 2020, presents China in a more universally flattering light. What the film lacks in political commentary, however, it makes up for with its tight focus on the daily grind of the medical staff and countless volunteers tirelessly working at the Wuhan Red Cross Hospital.

Much of the film follows doctors and nurses, clad in protective gear, as they make their rounds, reassuring patients that everything will be fine, even as they’re only just beginning to understand the virus and how to treat it. The toll this regiment of 12-plus-hour days takes on the staff is palpable in virtually every frame, with insert shots of the medical team asleep on benches or slumped over in chairs speaking to the sheer exhaustion of being a cog in a medical machine, quickly churning through patients with no light at the end of the tunnel. One nurse, while being comforted as her dying father is taken away to quarantine, is ultimately told that she needs to remain composed so she can ready herself to return to work the next day.

Although the staff’s sacrifice and composure under fire is amply documented, 76 Days never stoops to sentimentality, eschewing fawning talking-head interviews and a musical score. Throughout, we’re left brimming in the immediacy of the chaos at hand; only the glimpses we catch of patients who’ve spent weeks, sometimes months, in the hospital provide a concrete sense of time’s passage since the start of the lockdown. Most memorable of these patients is an elderly man who repeatedly leaves his room to wander around the hospital and is continually corralled by different nurses back to his room. His exploits lend the film a bit of levity even as his backstory, once revealed, makes his foibles all the more heartbreaking.

The nightmare of caring for thousands of patients during a pandemic also extends to the intake and discharge processes. This makes for a few touching and cathartic scenes once certain patients finally receive the approval to return home, such as when the aforementioned older gentleman receives applause and well wishes from many of the nursing staff as he exits the hospital. But the film’s most poignant moment comes when an endlessly patient young couple finally meets their newborn child for the first time several weeks after her birth.

These brief glimpses of joy are counterbalanced not only by the gravity of the pandemic as it’s being fought on the frontlines, but also by the cumbersome and often tragic logistical tasks that the hospital staff must perform, such as dealing with the belongings of the dead. Among said belongings is the still-functioning cellphone of one deceased patient that displays 31 missed messages, a mere hint of the suffering that even many of the healthy residents of Wuhan endured in those early days of the outbreak. 76 Days is full of small yet revelatory moments like this, and in keeping its gaze so firmly planted on both the medical staff and patients as they’re forced to navigate the uncharted territory of a deadly new virus, the film may be the defining portrait of the dawning of the Covid-19 pandemic.

Review: Kill It and Leave This Town Vividly Marries the Mundane and the Dreamlike

Review: Soul More Sublimely Mediates on the Pull of Music Than It Does the Afterlife