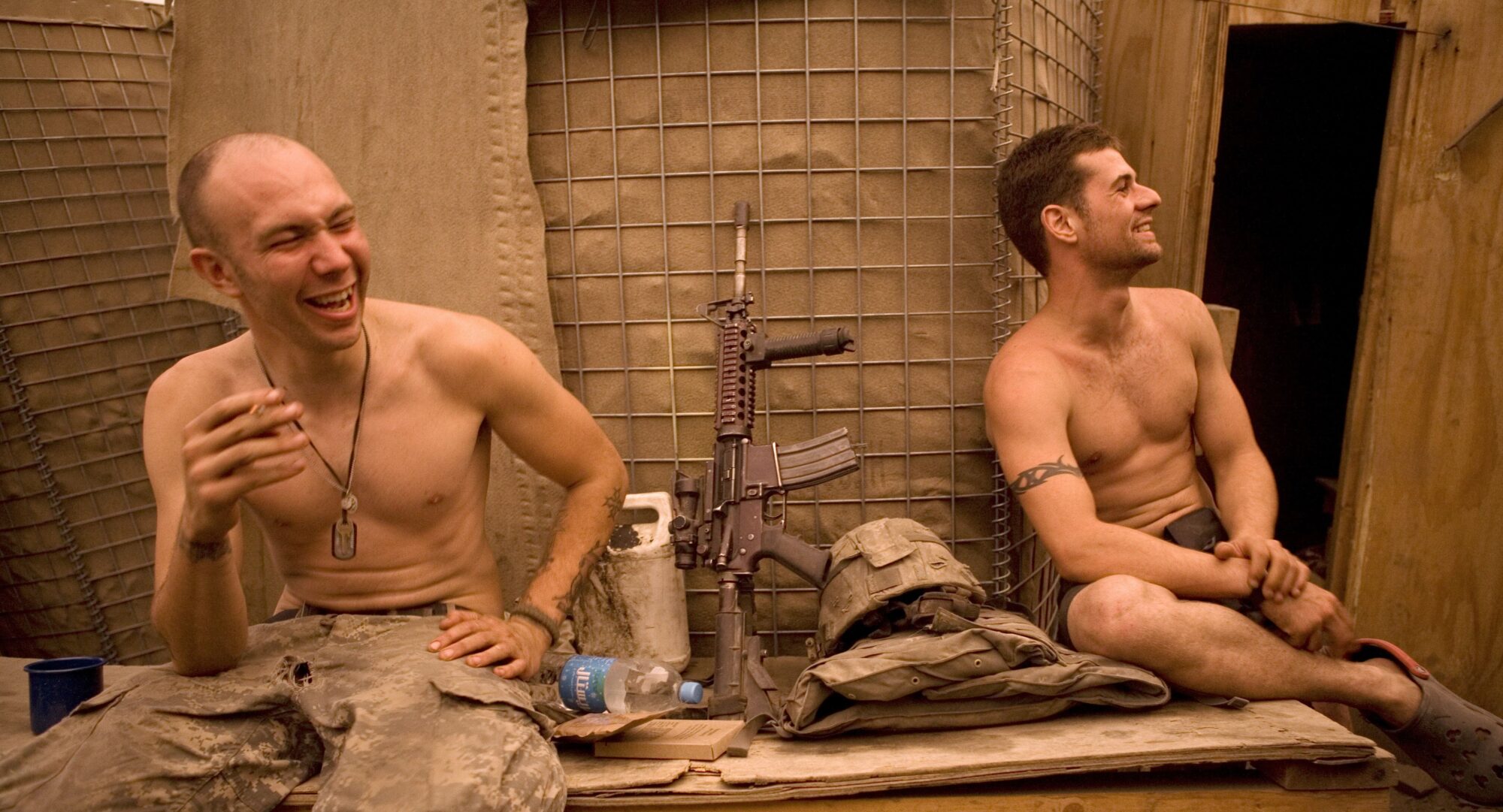 In a time of partisan sniping, the notion of the “apolitical” war documentary has its obvious appeals. Divorced from the vagaries of prewar justifications and post-combat exit strategies, it allows us to focus on “the human experience” of those individuals who know war not as philosophical argument or legislative act, but messy everyday reality. Such films remind us that injury, death, and destruction of homeland remain the bitter truths behind arguments about a war’s tactical and geopolitical efficacy—and that should not be forgotten. It’s a hard fact to argue with, and documentarians have a long and honorable history of using the medium to shine a light on what wartime does to those who live within its borders. Without denigrating either the work of these filmmakers or the people whose battle-scarred lives they’ve captured on celluloid, it’s also worth pointing out that shifting the focus from the political to the personal (to the extent that one can disentangle the two in the first place) has some concrete consequences for the viewer. Most notably, it can place us in a kind of empathic paralysis. Our hearts are inflamed by the visualized details of war’s large atrocities and small indignities. Yet if a film offers little in the way of context and argument beyond the idea that people suffer during combat, it’s difficult not to feel a bit adrift. The universality of the pain feels at once more understandable and more intractable.

Restrepo has been deemed an apolitical documentary by its directors, Tim Hetherington and Sebastian Junger, as well as the many who praised it at this year’s Sundance Film Festival, where it won the Grand Jury Prize for Documentary. And indeed it is: Save for a smattering of bare-bones explanatory intertitles, the film espouses no interest in explaining the tangle of corruption, religious fanaticism, and military error that has kept the United States and others embroiled in Afghanistan. Its focus remains exclusively on the second platoon of Battle Company, part of the 173rd Airborne Brigade, stationed in Afghanistan’s Korengal Valley, a hotspot of conflict when Hetherington and Junger began filming in 2007. The directors’ camera remains fixed on the platoon’s 15 members, whether on the ground or in post-facto interviews shot after their return from the Korengal, documenting their movements, thoughts, emotions, and interactions with an eye for the way combat tears away at the individual even as it bonds them in fraternal unity.

As a result, our experience of the war becomes shaped almost exclusively by the collective emotional and physical experiences of the men themselves—a choice at once successful and not particularly new. Exploring the ways that men—and it’s all men here—survive the horrors of combat through battlefield camaraderie remains a time-honored trope of modern war stories, and Hetherington and Junger document it with respect and more than a little affection. There’s the usual roughhousing in the mess hall, as well as an impromptu dance to Gunther and Samantha Fox’s “Touch Me (I Want Your Body),” all of which the filmmakers accept as respite from isolation, rather than poke around for evidence of ritualized homoeroticism. And when the fighting commences and fellow soldiers begin to die, Restrepo becomes a study in the way soldiers struggle to internally process and externally honor their fallen comrades. A particularly messy operation is recounted for us by the soldiers in interviews prior to the combat footage, revealing the emotional scars before we witness how each man received them. Even the film’s title, a reference to the strategic outpost that the platoon built in the Korengal, ties back to the personal. The outpost is named after jokey, guitar-playing private medic Juan S. Restrepo, who was killed in the early days of their time in the Korengal. The film opens with a shaky cellphone video of Restrepo and fellow soldiers, pre-deployment, joshing on a train, and the deceased soldier’s laughing face hangs over the movie like a benevolent, unreachable spirit.

That footage remains among Hetherington and Junger’s most explicit aesthetic choices; for the majority of the film, the viewer is aware of their camera only to the extent that the rough-and-tumble atmosphere of the Korengal necessitates frequent unsteady zooms and whip pans. Even a seemingly self-conscious choice, as when footage of an IED explosion continues to roll after the camera’s sound has cut out, paradoxically ups the authenticity factor. We assume it to be the decision of a documentarian to keep filming regardless of damaged equipment, even as it offers a very cinematic moment of sensory confusion.

This makes sense, given Restrepo’s unswerving focus on the soldiers’ experiences alone. It also points to the limits of such a project. By keeping the perspective tightly centered on the platoon and largely downplaying the war, Hetherington and Junger give the soldiers’ exploits an oddly generalized character. The men will discuss the objectives of individual missions: a road to be protected or village elders to be consulted. The big picture, however, feels just out of reach. One could perhaps take this as a political comment in and of itself: the disconnect between a war’s architects and executors. Even still, the anecdotes and ideas that the filmmakers foreground here remain familiar ones, largely uninflected by the particulars of the war they are fighting. The major exception comes from the combat footage itself, where the beautiful, multifaceted terrain of the Korengal (verdant forests, rolling hills, and craggy gorges) leads to battles fought across hundreds of yards and bullets flying from all directions. The filmmakers make little attempt to locate us spatially with the camera; in truth, they probably couldn’t if they wanted to. As an orientation to the soldiers’ daily disorientation, it’s gut-wrenching.

On some level, criticizing Restrepo feels both unfair and churlish. Hetherington and Junger’s fair-minded chronicling of military experience remains a valuable piece of filmmaking, perhaps essential in reminding us of what warfare extracts from those who fight it. Yet I cannot help but think that, as we cross into year nine of our involvement in Afghanistan, that we need filmmakers to do other things than soberly remind us that war is hell. It’s a lesson we need to be reminded of, but it’s one we already know. There are so many others to learn before this long conflict comes to a close.