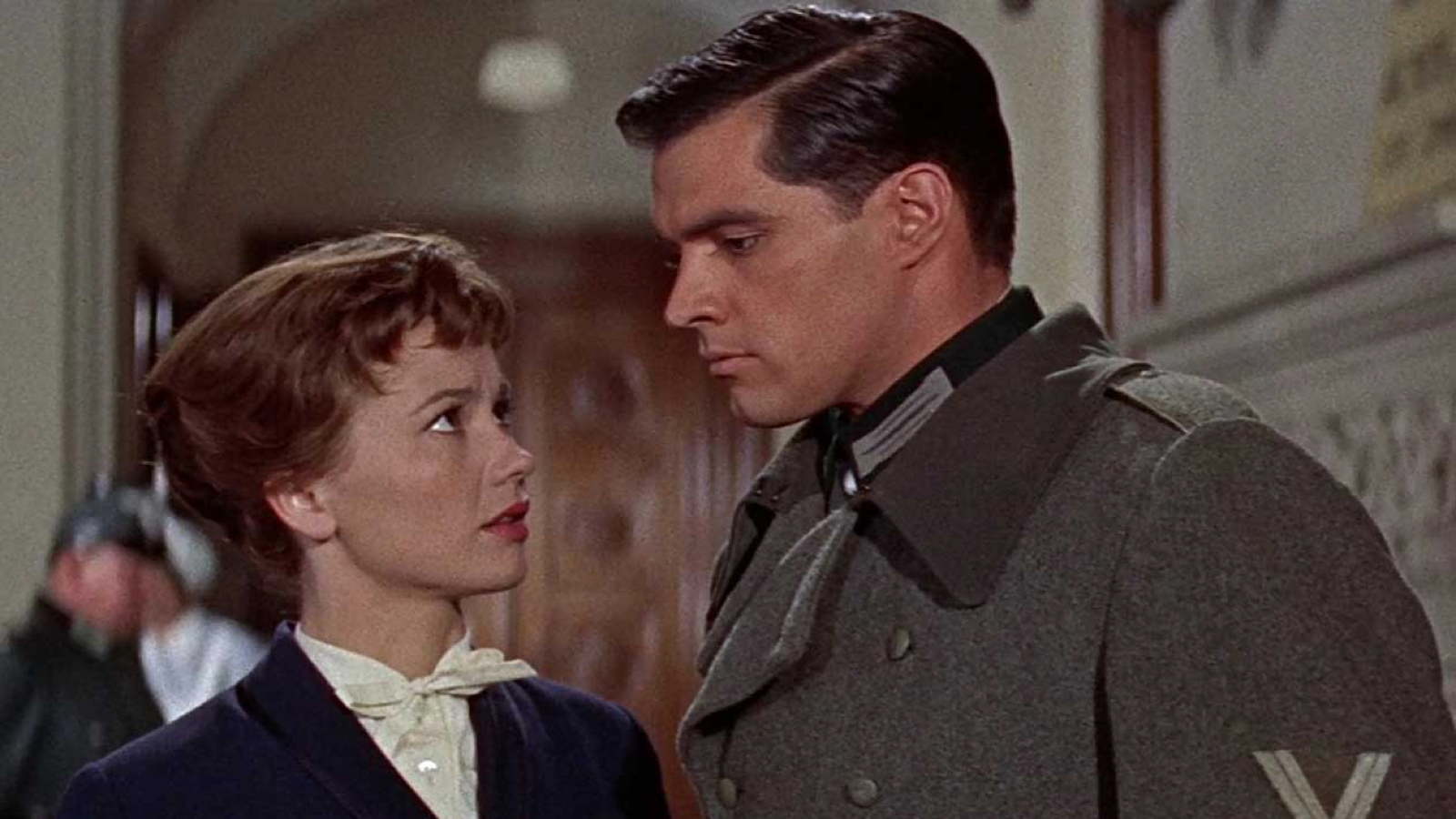 Against a black screen, a voice that seems to be imitating Orson Welles tells us about the great success of Erich Maria Remarque’s anti-war novel All Quiet on the Western Front, and claims that the movie adaptation is one of the greatest films ever made. There is a brief, curtailed allusion to its star Lew Ayres and his later pacifism during World War Two. Then the voice implores us to give our attention to two young Universal studio players, John Gavin and Lilo Pulver, and with that, the main credits start for Douglas Sirk’s film of Remarque’s World War Two novel, A Time to Love and a Time to Die (1958), the slightly gooey typeface set over a blossoming tree that gradually starts to die and then gets covered in snow. It’s as if Sirk is taking the quivering suburbia credits of one of his Jane Wyman soap operas and sending them to war.

Greys and blues predominate on Sirk’s 1944 Russian front; the German soldiers gripe about having to kill civilians. A newcomer to the outfit stops and stares at a black hand sticking out of the snow; the soldiers dig up the body, and Sirk lingers over the dead man’s decayed, blackened face. The newcomer says that the corpse looks like it’s crying, and he is told that the man’s eyes have frozen and are now melting. When the newcomer shoots himself and the soldiers find his body, Sirk repeats the same smooth, cool camera movement over the snow that he used earlier when the newcomer saw the blackened hand. Always, Sirk maintains a distance from his material, shying away from it whenever it threatens to become obvious.

Remarque was a solid but second-rate writer who tended to recycle his own material; he turns up in Sirk’s movie as a forbidding-looking Professor who does a bit of preaching about God and responsibility in one heavy-handed scene toward the end. There are lots of sand traps like that in this script, but Sirk is a past master of handling the most dubious writing and acting and still somehow making it conform to his overall vision (surely he was made to handle the heavily seasoned works of a major writer like Thomas Mann, but Remarque will do in a pinch). There are echoes of Frank Borzage’s Remarque-inspired Three Comrades (1938) in the enclosing love story between Gavin and Pulver, but Sirk replaces Borzage’s warmth with his own stern detachment. He draws a charming performance from the German-born Pulver, and he tries his best with the pretty but very remote Gavin; these lovers are always ducking into cellars during air raids and either losing or stealing bottles of liquor, leaping from ruin to ruin until time, if not love, runs out.

Sirk said he liked the irony of the ending, but it comes across as a cheap attempt to copy the famous last shot of the film version of All Quiet on the Western Front, with a love letter substituted for a butterfly. Miklós Rózsca provides a stormy score that fits the forties time period, and the film has some amusing casting: A young Klaus Kinski has a film-halting bit as a Gestapo agent, and Dorothea Wieck, who played the sensual lesbian schoolteacher in the Weimar-era classic Mädchen in Uniform (1931) turns up briefly. The scenes depicting Gavin’s despicable Nazi school-hood friend are strangely handled, mainly because Sirk seems more interested in ridiculing the vulgarity of fascist cultural taste than in any more sweeping moral denunciation. This isn’t one of Sirk’s best films, but it is most likely one of his most personal. He was separated from his son by his first wife, who had wholeheartedly joined the Nazi party, and this lost son later died on the Russian front. In the last scenes of the movie, Sirk shows us several blond-haired boys ready to go off to war, and you don’t have to know his history to be moved by their forgone fate, or the artist who could use a small part of his own personal pain as a fully justified grace note in this, his penultimate Hollywood production.