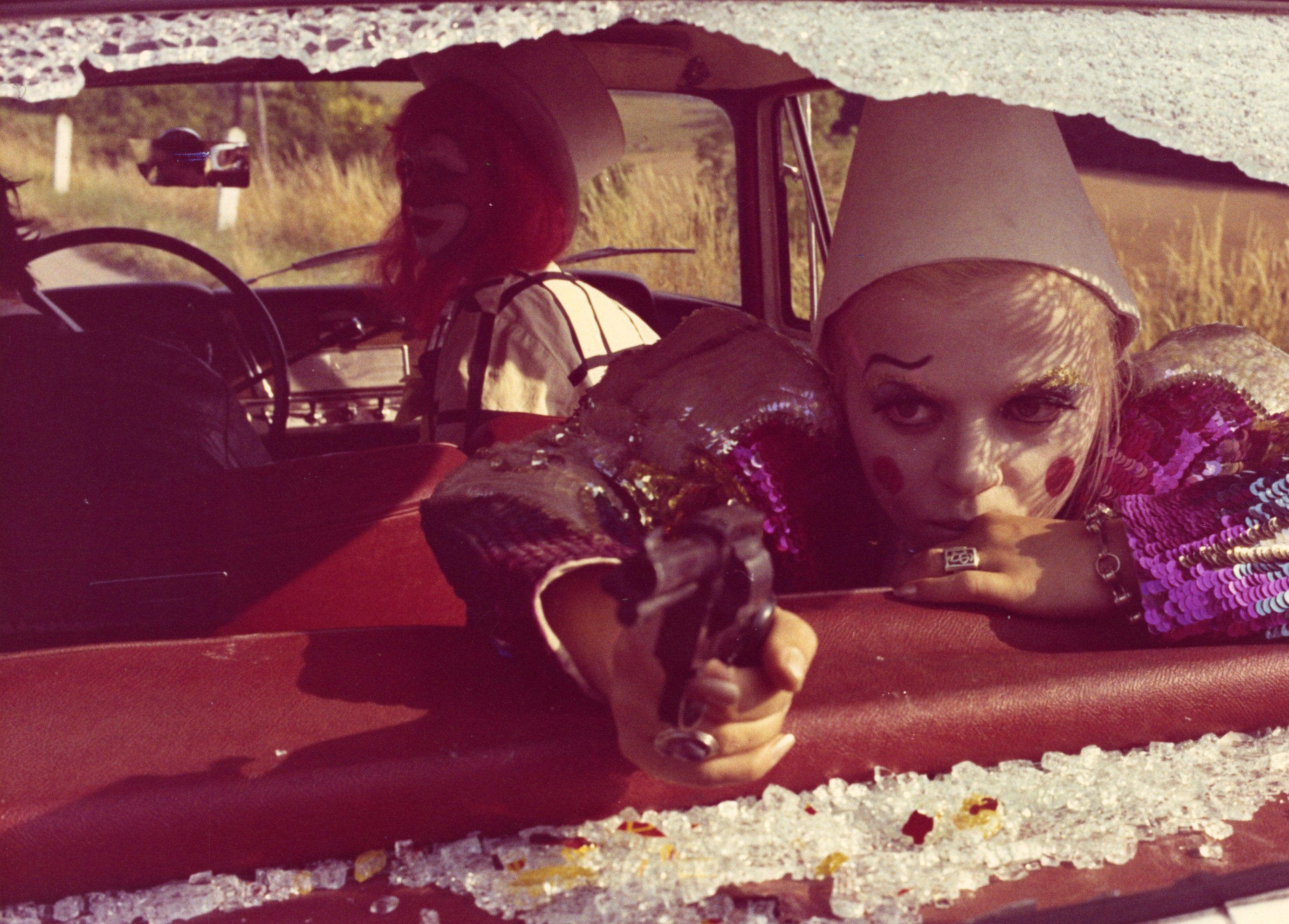 Earlier this year, Redemption Films, in conjunction with Kino Lorber, released a five-title slate of Jean Rollin films on Blu-ray for the first time ever. The latest batch, three films from Rollin’s early period (1968-1974), showcases the inimitable eroto-surrealist’s more experimental side, whether mashing together disparate styles and tones (The Rape of the Vampire), venturing toward nearly silent cinema (the first 40 minutes of Requiem for a Vampire are nearly wordless), or sliding into fractured fairytale mode (The Demoniacs plays like a Breton folktale scripted by Joris-Karl Huysmans). In my previous dispatch on Rollin’s films, I emphasized the need for acclimatization, taking the time to get into synch with his sensibilities, in order to fully savor the atmosphere of desire and doom that Rollin (spiritual heir to fin-de-siècle decadent writers like Huysmans) cultivated with such alacrity. That holds in spades for these new films. While, by and large, they’re a bit patchier—and occasionally more off-putting—than previous titles, there are riches enough on display here to amply reward the adventurous and attentive viewer.

Rollin’s first feature film, The Rape of the Vampire, was originally commissioned as a half-hour short by American producer Sam Selsky to round out a double bill alongside a French-dubbed version of 1943’s Dead Men Walk. When Selsky got a gander at what Rollin could do on a next-to-nothing budget, he gave the go-ahead to expand the short to feature length, figuring it would end up costing “twice nothing,” which partially explains Rape of the Vampire’s subtitle: A Melodrama in Two Parts. Atypically for Rollin, who tended to favor sepulchral hues and garish gel lighting, Rape of the Vampire is filmed in stark black and white, and features a number of stylistic flourishes—upside-down shots, exceedingly canted Dutch angles, a stunning 360-degree pan that rivals the vertiginous prom dance in Brian De Palma’s Carrie—that Rollin would rarely indulge in later films.

Part one follows Parisian psychiatrist Thomas (Bernard Letrou) and his companions, Brigitte (Solange Pradel) and Marc (Marquis Polho), on a doomed quest to free a quartet of “vampire sisters” from what they take to be their illusory condition. The big city sophistos consider vampirism as nothing more than a mental illness forced upon the sisters by the superstitious persecution of local villagers, a neat inversion of the usual vampire lore closer in spirit to George A. Romero’s excellent, under-sung Martin. Exempla gratis: The girls worship before a horned fertility idol, revealed to be the mouthpiece of the lord of the manor (Doc Moyle), a stock villain from Central Casting down to his Snidely Whiplash ‘stache and nefarious agenda. After much gratuitous disrobing (a Selsky suggestion Rollin made his own through strange juxtapositions of bared flesh and moldering environs) and running hither and yon, the inversion is itself inverted when it transpires that the sisters are indeed vampires after all, and all hell breaks loose—or, anyhow, as much as Rollin could afford (witness the pitifully sparse pack of angry, torch-bearing villagers, including poster artist Philippe Druillet and Rollin himself).

Like a proper Shakespearean tragedy, the first part ends with the bulk of its dramatis personae recently deceased. Wither, then, the sequel? Taking his cue from a childhood love of Louis Feuillade serials like—what else?—Les Vampires, Rollin simply resurrects them as need be, introducing as the second half’s focal point a mod Queen of the Vampires (Jacqueline Sieger), and injects another pseudo-scientific quest for a cure, a motif prominent again in The Nude Vampire. The first part of Rape of the Vampire may be stronger on genre ambience, coming on like the illegitimate lovechild of Carnival of Souls and one of Hammer’s Dracula films, but the second ventures into artier, overtly theatrical terrain. (The strident, atonal free jazz score by Yves Géraud and François Tusques serves as ideal accompaniment.) Nevertheless, the latter part contains plenty of striking imagery, such as a pointedly anachronistic funeral procession, including horse-drawn hearse, presided over by a fanged priest holding aloft an inverted crucifix. The “blood wedding” finale, reportedly filmed onstage at the legendary Théâtre du Grand-Guignol, deconstructs the entire film as a particularly flamboyant piece of op art, as well as providing (with its riotous disruption mid-performance) the perfect correlative for the protests of May ’68 then raging through the streets of Paris, especially in the Latin Quarter where Rape of the Vampire had its premiere, a concatenation of events that contributed in no small measure to the film’s succès de scandale.

Rollin claimed to have written the treatment for Requiem for a Vampire in one impromptu burst, stacking incidents on top of each other with little care for plausibility, or any other connective tissue for that matter. In fact, the nucleic image—a woman (Louise Dhour) playing the piano in the middle of a cemetery—occurs late in the film, so you’re free to imagine the process of concocting Requiem for a Vampire’s storyline as a playful variation on one of those Choose Your Own Adventure books. (Rollin himself emphasized the story’s childlike qualities.) The film kicks off with a blast, thrusting the viewer smack in the middle of one of the oddest car chases ever filmed: The fleeing car has two women (Marie-Pierre Castel and Mireille Dargent) got up in full clown makeup and attire crouched in the back seat, trading potshots with the pursuing vehicle. The chase concludes with their driver dead, so the duo put the torch to both body and car. We never learn who these women are, nor why they’re being chased, and, quite frankly, given Rollin’s unceasingly oneiric flow of imagery, we never have cause to bother much about it.

After this whizz-bang opening, Rollin brings the pace down to a simmer. The pair shed their harlequin makeup (shown, in one bravura shot, with a close-up on a puddle of water as it’s clouded by colors), and trek across the crepuscular countryside, the camera following their pilgrims’ progress in leisurely pans, before taking shelter in a typically Rollinian terminus: the local cemetery. (If any topological tropes can be said to haunt Rollin’s films, they would have to be a particular stretch of beach near Dieppe wedged between sheer rock outcroppings and seaweed-spattered mooring posts, and the wrought-iron precincts of a rural graveyard.) After one of them is almost buried alive, the twosome pick their way through a dark forest straight out of Dante, until a fateful encounter with a couple of vampire bats ushers them into a seemingly abandoned gothic castle.

Requiem for a Vampire’s middle parts are taken up with some light lesbianism (bedding down, the girls writhe around in the buff for a bit), nocturnal perambulations about the fortress (stumbling into a skeleton-staffed chapel), sightings of a semi-vampire (Dominique, the actress who memorably emerged from a grandfather clock in Rollin’s earlier Shiver of the Vampire), as well as a protracted, scarlet-hued rape/torture perpetrated by the vampire’s henchmen (another Selsky special). Only latterly does something resembling a plot emerge: In order to be initiated into the vampiric order, the girls must lure unsuspecting victims into the castle, using only their feminine wiles. This allows for more T&A (a striptease atop the battlements, a tryst among the ruins), capped by the film’s most controversial scene: Dargent sadistically whipping a naked Castel in order to discover whether she’s slept with her prospective victim. Requiem for a Vampire earns its title with the aforementioned cemetery serenade: The last of the vampires chooses an eternity of imprisonment in his tomb, rather than continue the line by infecting the women, a direct echo of Rape of the Vampire’s final moments, wherein the vampire lovers brick themselves up in their lair. One of the key components in Rollin’s macabre poetry, evidently, is to be more than half in love with easeful death.

“At the end of the last century on the north European coasts, lived men who feared neither God nor the law. They lured ships toward the rocks where they were smashed to pieces. These men then plundered the wrecks. They were called wreckers.” Rollin’s most uncharacteristic early film, The Demoniacs again evinces his love for serial cinema with its unusual opening montage: a series of vignettes that introduce the main characters (seen in cameo over images of a smoldering shipwreck) while a narrator describes their vilest attributes in florid detail. In his liner notes to the set, Tim Lucas astutely limns the film’s generic debt to Fritz Lang’s swashbuckler Moonfleet, another of Rollin’s favorites. Differences in narrative development and tone are also illustrative: Given its cast of characters’ uniformly unrepentant evil, and a cataclysmically bleak ending, The Demoniacs is one of Rollin’s most ferocious, even brutal films.

Studio-ensconced for the first time in his career, Rollin made the best of a bad situation by dressing his sole set in baroque fashion, resulting in a mariner’s tavern as designed by Man Ray, as well as relieving the resultant claustrophobia by frequent excursions either to the beach (complete with blazing wreckage to clamber around on) or the ruined chapel that provides many of the film’s most impressive visuals. Stark as a murder ballad in incident, The Demoniacs concerns themes of guilt and revenge that (as Lucas also notes) are rare stocks-in-trade for Rollin. The wreckers’ two young victims (played by unknowns, since the Castel twins were evidently unavailable) make a pact with the devil (Miletic Zivomir) to gain his power and obtain their revenge. Along the way, Mirelle Dargent turns up in full clown costume. Driven mad by guilt, the captain (John Rico) turns on his fellow wreckers.

And then there’s the volcanic Joëlle Coeur as Tina the wrecker. Her uninhibited, force-of-nature performance is worth the price of admission alone. Turned on to the point of frenzy by the sight of cruelty and blood, Tina goads on the other wreckers to rape and murder. In one remarkable scene, she sets about pleasuring herself along the rocky coast, throwing her body around the jagged strand with wild abandon, while the captain and his cronies partake in their vicious pastime. Equally remarkable, in their own way, are the film’s final images, as the sea closes silently around the carnage, bringing with it a placid serenity as imperturbable and illimitable as the tomb’s.