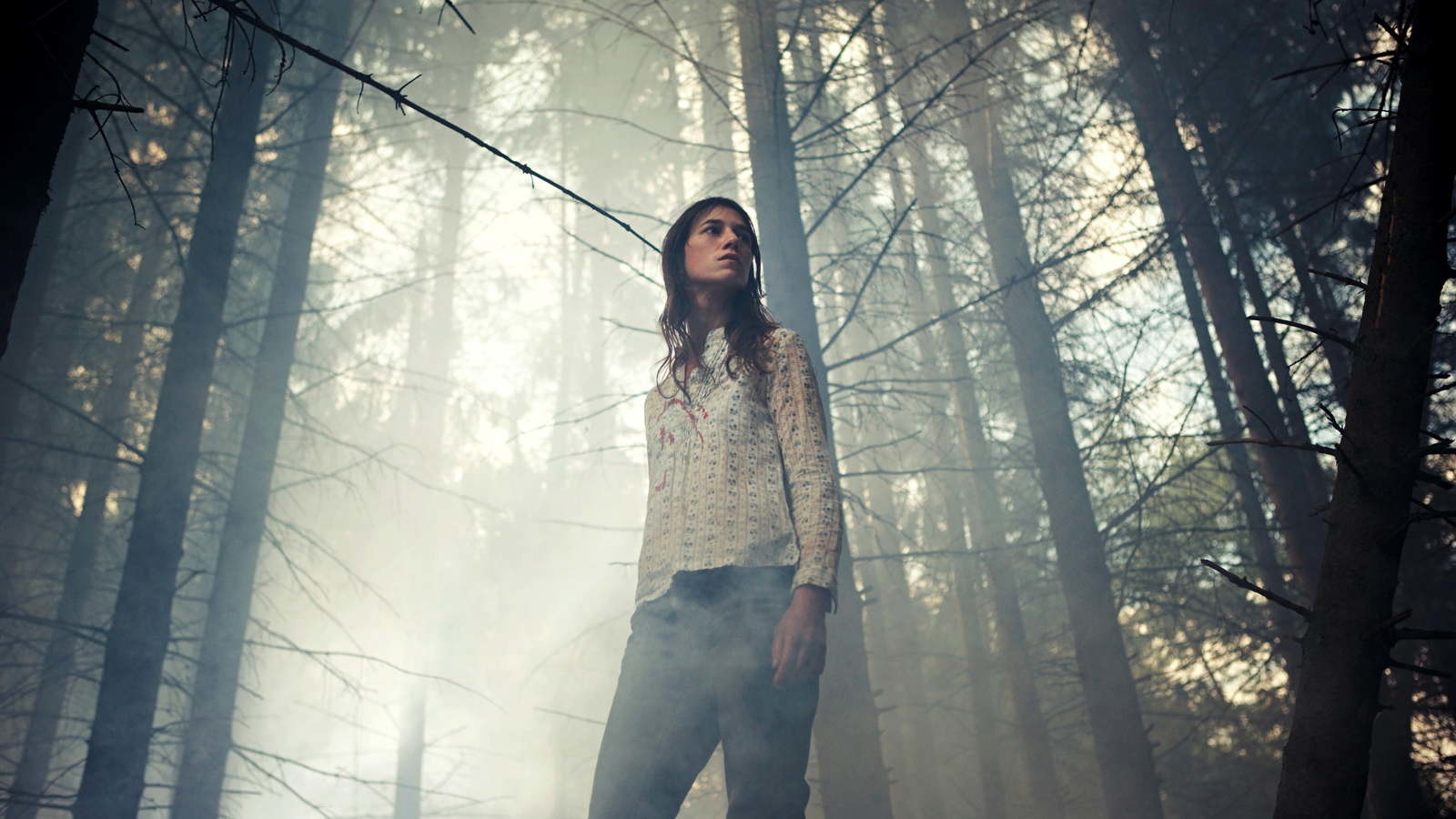 We see a husband and wife (Willem Dafoe and Charlotte Gainsbourg) in the shower. Everything is in beautiful slow-motion black-and-white. The water cascades down onto their beautifully sculptured faces. Flakes of snow gently blow through the open window of their bedroom. It’s all ethereal, meditative, with classical music playing, and as the couple drift into sex, their little child, barely more than an infant, bobbles across the floor towards the wide open window, happily makes his way up and over, and plummers to the street below. Thus we have the opening of Antichrist, which is both beautiful and pretentious and sexually charged and a little nasty.

The opening of Lars von Trier’s latest feels surprisingly gentle considering its content, but maybe that’s because it exists in contrast to the rest of his movie, which is as scathing a portrait of male-female relationships as the most savage of August Strindberg’s plays. Shot in the handheld, jump-cut style we’ve come to associate with the director’s films—muddy, washed-out colors and drawn-out, never-ending dialogue scenes that roam around in circles and sometimes feel like they were written by an angst-pained teenager (but, strangely, I mean that as a compliment!)—von Trier gets in touch with a sort of destructive, gleeful childishness that’s not as rare as one might think in grow-ups, only rarely admitted aloud.

Von Trier is a compulsive button-pusher in the battle of the sexes, the battle of political correctness, the battle of cinema as playground of ideas. Antichrist is a plunge into the director’s psyche as nightmare zone. It’s decidedly unpleasant. The first half is mostly a husband and wife squabbling over ghoulish subject matter, only never really admitting to themselves what it’s all about, which is probably their sheer loathing for one another and that they never really wanted to be saddled with this damned kid in the first place.

The husband is a passive-aggressive psychiatrist who thinks he knows what is best. His wife is retreating further into a kind of catatonic nervous breakdown state, wallowing in layers of depression and guilt. She’s living an existential horror, walking around in discomfort, and even when she smiles it feels like an act. He asks her a barrage of questions, all under the guise of a physician’s care, and occasionally she lures him into sex in order to fuck the pain away.

When he realizes she is most terrified of revisiting their remote woodland cottage, he sets his mind to bring her there immediately in order to face her fears. Most of Antichrist takes place in this impenetrable forest, with the husband leading the wife through a series of what resemble games (walk from this stone to this stone through this deep green grass in order to face your terror of green). She complies, with an emotional palette ranging from numb to mortified to fake-happy, and it’s when she’s smiling and claiming to be all right that she can be trusted the least.

But these are the weakest parts of the film, this boy versus girl struggle of wills, which is more the husband being a difficult pain in the ass under the guise of nurturing support and the wife doing a slow-burn towards deeper madness and anger. Since there’s nowhere for the actors to hide—they’re sometimes graphically naked during the many sex scenes—von Trier leans heavily upon their individual talents. Dafoe has always had a strong presence onscreen; he’s a physical actor who also conveys a weary contemplativeness. He doesn’t seem to have aged at all in the past ten years except behind his eyes. Fearlessness is necessary for Antichrist, and Dafoe seems willing to go wherever von Trier will lead him. But in many ways he has the easier job—the man who pushes, and the man who has to recoil when the woman pushes back.

The more challenging role goes to Charlotte Gainsbourg, who is called upon to bare not only her flesh, but the darkest parts of herself. She seems courageous in her willingness to go there, and like all strong actors there’s a touch of mania and unpredictability in her even when the action is as simple as rising out of bed and walking across a room. A very capable, interesting actress, Gainsbourg plunges into depths that demand the qualities of someone with a wider emotional or psychological range. We often see her hitting the limits of her ability, trying damned hard to dig deep inside herself, and at a certain point it seems like she has nothing left to access.

I suspect Gainsbourg is playing the part Lars von Trier most identifies with, since the wife is slightly crazed by the bullshit of the world, disgusted by her own inabilities to share, feels terror for inanimate objects or abstract ideas like the woods, the dark, the ghosts, guilt, other people—and von Trier bravely tosses it all into his film. Sometimes Antichrist feels like it was written on a threadbare napkin, but it was clearly created by someone who had a lot of garbage on fire inside his belly and needed to get it down as a way of vomiting out the pain. If any of it feels silly, just go back to the writings of Antonin Artaud—a hotbed mix of absurdity, doltish scribbles, mad genius, and audacious imaginative leaps. In other words, he wasn’t afraid to look dumb, and only by delving into idiocy at moments could he touch something deeply personal.

Antichrist feels like a chore much of the time, but as it approaches its final third, it really starts to test the mettle of its art-house audience. There are signs of supernatural horror even in the early going. There are mentions of witches and possession; animals in the woods seem to have strange powers; Dafoe falls asleep by an open window, and in the morning there are bloodsucking bugs all over his arm. But when a dead animal lying in the brush looks straight into the camera and pompously spits out the words, “CHAOS REIGNS!,” you have to decide whether you’re with the movie or against it. For me, the more surreal and ridiculous it became, the closer Antichrist got to the fever dream I think von Trier was hoping to purge.

From here, the husband and wife battle of wills becomes a life-or-death struggle that involves a whetstone drilled into one of the character’s legs, graphic onscreen genital mutilation, and beating on an erection with a wooden board until it ejaculates blood. “What am I watching here?” shrieked a critic at the press screening I attended, which erupted into a kind of controlled frenzy. You could hear people reaching for their bags, zipping them up, and preparing to walk right out of the theater—audibly gasping and fretting—but I don’t think anyone left.

Antichrist pushed the cinema of transgression beyond much of what this audience had seen before, and they eventually sat stunned and mortified, downright disgusted and baffled, maybe even upset. Some of them reacted with a sort of detached ironic giggle, as if they couldn’t even take upsetting images seriously anymore and were distrustful of having their feathers ruffled. I suspect it’s representative of how the larger audience will feel about the film, which is intensely difficult to “like”—it’s rough, sloppy, discordant, sometimes its sexual politics are infantile, and it revels in obscene and disgusting images.

Somehow when we watch this sort of junk in Hostel and Saw, it’s easier to take because it all feels like play, as if the violence isn’t really to be taken seriously. But after we’ve seen a husband and wife squabble for sixty minutes, the brutality is tougher on us because it sits closer to our hearts and guts. It’s not pleasant, but it’s highly engaging. And just when you think von Trier can’t get more outrageous, he brings back the animal characters—who start roving around the house like spiritual totems—and even a legion of barely visible witch-women marching across a landscape. Yet what perhaps caused the greatest offense after this nightmare gallery of baroque horror imagery and extremities was the first end-title card: “Dedicated to Andrei Tarkovsky”.

After all that, the critics were reeling and laughing. They then quietly made their way out of the theater. I suppose it was for the best that no one wanted to talk about the film—a more comforting elevator topic was where to get some decent Thai food. Antichrist isn’t meant to provoke an instantaneous response. If you were to have asked me what I thought even a day after the movie, I’d probably have said, “Man, I don’t know…I don’t think I liked it very much, but I really want to grapple with it some more.” How many movies nowadays are even worth grappling with?

Maybe Antichrist is just a big pile of neuroses piled one atop another, with von Trier’s prankster shenanigans causing little more than irritation at best and boredom at worst. But I submit that the film is akin to flipping through the diary of a teenage girl who is scared of men and blood and the inner transformation of the body and of emerging womanhood and of how nobody understands and that life is just plain sad and that sometimes it royally sucks. But it doesn’t just indulge those feelings; it understands them. It’s the kind of movie where, if you plug into its fear sweat vibe, you’ll wind up feeling a little less alone.