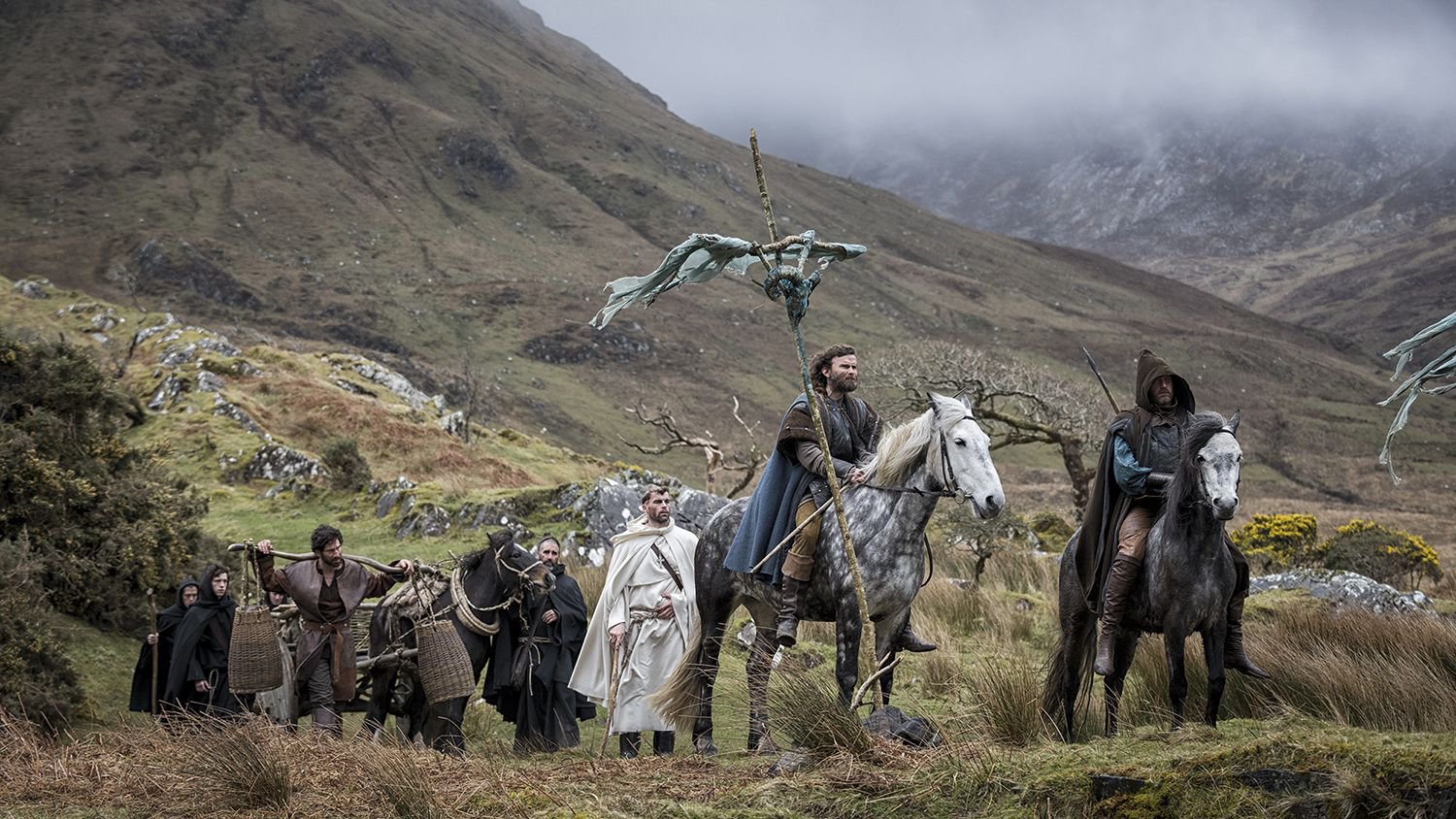 Though it paints its characters in broad strokes, director Brendan Muldowney’s Pilgrimage places them in a 13th-century Ireland that offers a unique cultural specificity to a portrait of paganism versus Christianity and the after-effects of the Norman invasion. The film’s images grittily capture the brutality of the period, though they also have a troubling tendency to linger on and even savor the excessively graphic violence that explodes on screen throughout. The stark contrasting of the peaceful asceticism of the story’s monks with the violent tendencies of the other characters is as bluntly drawn as the screenplay’s portrait of innocence pitted against corruption.

Pilgrimage’s major conflict lies between the rapidly expanding, centralized power of the Catholic Church in the post-Crusades era and a group of monks forced to transport their monastery’s most cherished relic to Rome for the pope. Brother Geraldus (Stanley Weber) of the Cistercian order arrives with the authority of the pope to the monks’ small village, insisting that their sacred relic holds the power to distinguish the faithful from the faithless and can be used to unleash the wrath of God to protect His followers. Among those who accompany Geraldus back to Rome with the relic are a nameless mute (Jon Bernthal), thought to have fought in the Crusades prior to his vow of silence, Diarmuid (Tom Holland), a young monk who’s never left the village before the start of this pilgrimage, and Ciaran (John Lynch), a senior monk who questions the motives of the Church from the outset.

Pilgrimage functions as a virtual travelogue through medieval Ireland as well as a tale of untainted faith encountering the corrupted, power-hungry motives of a large, increasingly powerful organized religion. The growing tension between the well-dressed, dangerously fundamentalist Geraldus and the spartan monks is mediated by a group of pagan Norman soldiers, led by Raymond De Merville (Richard Armitage), who agree to escort and protect Geraldus and the relic all the way to Rome in exchange for fair compensation. This journey in effect becomes a tour through a country that was until then operating primarily outside of European control, and as the characters cross Ireland, viewers are made privy to a land plagued by constant tribal warfare and splintering pagan tribes with an array of evolving belief systems.

The film’s aesthetic is driven by a grim color palette and a heavy reliance on handheld close-ups and medium shots, all mirroring the solemn piousness of the monks. But like its soundtrack full of Gregorian chants, Pilgrimage drones on rather monotonously. Once Muldowney establishes the relationships that dominate the film, there’s little intrigue that plays out between the characers, who quickly ossify into caricatures of rapacious authoritarianism or solemn, unwavering piousness. Broken up by fight scenes that are impactful only because of their grotesqueries, the film remains too uncompromisingly black and white as a character study and a story of the conflicts of faith.