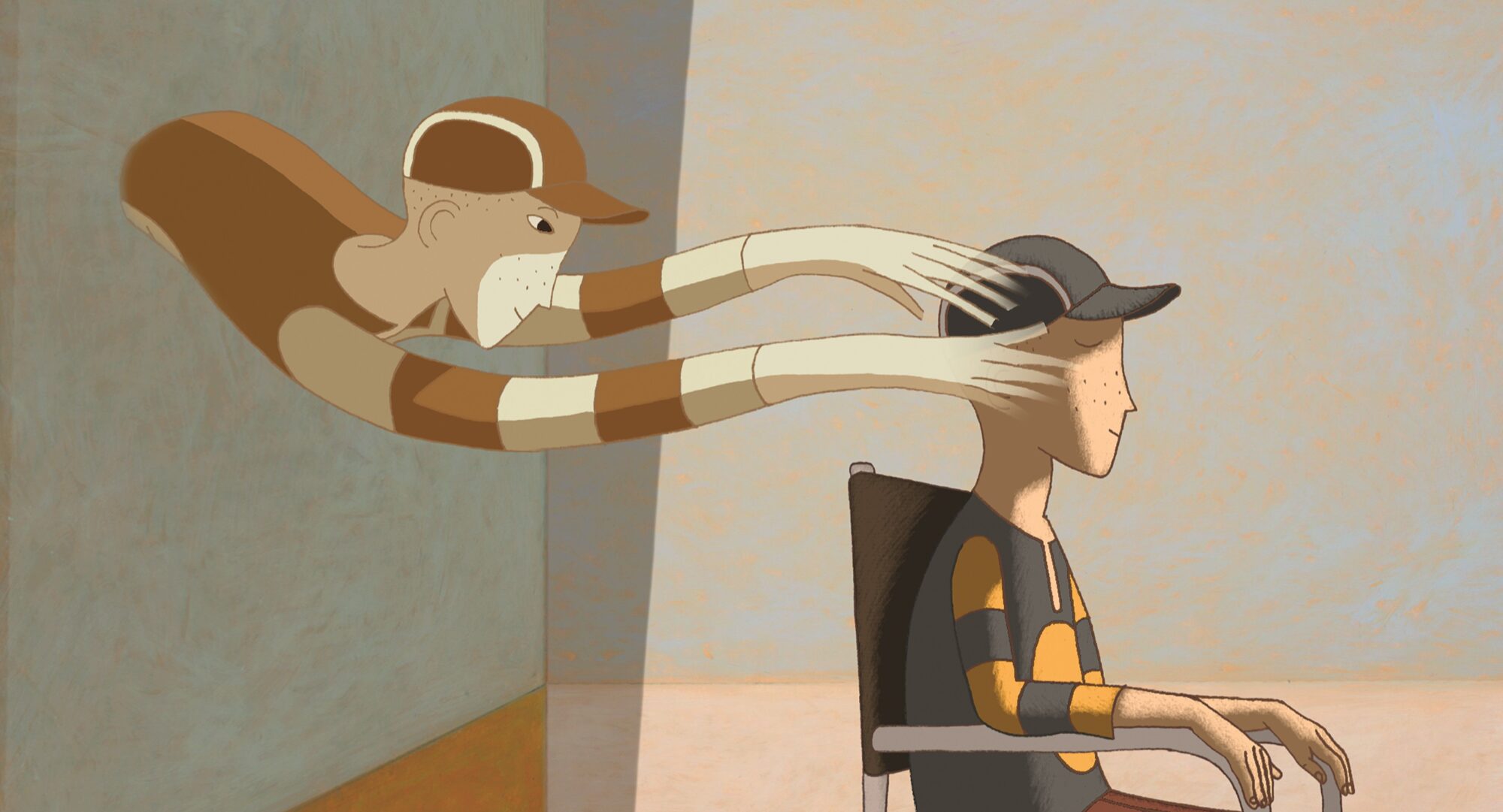 Jean-Loup Felicioli and Alain Gagnol’s Phantom Boy, whose illustrative animation style and narrative suggests a children’s ghost story by way of Louis Feuillade’s work from the silent-film era, is a hodgepodge of genres and cinematic reference points. The film’s pseudo-Fantômas is an elusive, disfigured criminal, The Man with the Broken Face (Jean-Pierre Marielle), who’s hell-bent on taking over New York by controlling its power supply, all the while being pursued by a reckless but well-meaning cop, Alex (Édouard Baer). While recuperating from a leg injury, Alex befriends Leo (Gaspard Gagnol), a cancer-stricken boy with the unexplained ability to leave his body as a phantom—a skill that proves useful in the pursuit of Broken Face.

Hovering somewhere between dream and reality, the film’s vision of New York is rendered as a near-utopian playground connected by a seemingly endless maze of secret passageways. This is an outsider cinephile’s conception of the city (at one point, Leo even swoops by a Woody Allen doppelganger sitting on a bench by the Queensboro Bridge) that’s frequently intoxicating, and in spite of the too-safe narrative’s sporadically buzz-killing cop-outs.

For such a noir-affected vision of a city’s underbelly, and given the narrative’s plethora of stand-offs and chases, Phantom Boy is oddly zapped of suspense. Since Alex is stuck in the hospital and Leo follows the criminals as a phantom who can’t be seen or heard, the film seldom allows us to worry for the heroes’ safety, or if they have a chance at stopping Broken Face, because as evidenced by the gang’s incompetence and dimwittedness (often stressed for humorous effect), the villains are likely to be defeated by their own hand. Even intrepid reporter Mary (Audrey Tautou), upon helping out with the case, never evinces any concern in the face of the criminals that have New York in their grasp.

Phantom Boy is most successful as a ghost story of sorts, and to Felicioli and Gagnol’s credit, they rarely dwell on the specifics of how Leo can leave his body as a spirit. This gives the film, which never gives in to an Inception-like parade of deadening instructions and rules, the aura of an otherworldly mystery. Aside from Leo’s function as a would-be detective in pursuit of the story’s criminals, the filmmakers utilize the boy’s novelty power to present a profoundly empathetic vision of loss. As Leo slowly seems to succumb to his sickness, he uses his spirit to visit his parents and little sister, who try to cope with the possibility that he may die; they all express their grief in different ways, with the parents speaking candidly about Leo’s potential death and the sister, who doesn’t entirely grasp the concept of death, processing it by simply reading aloud a story she and her brother enjoy together.

Leo’s will to live isn’t born out his own desire not to die, but because he saw firsthand the effect his death will have on his family. While such a powerful yet reserved moment seems to clash with the tonally opposite and innocuous story of the criminals, Felicioli and Gagnol prove that, despite approaching danger with frustrating trepidation, they’re thankfully willing to render, with unremitting vigor, how grief can batter the human heart.